Princess Margaret was certainly a style icon in her time, and it seems that the late royal’s legendary glamour is still influencing trends today.

Supermodel Bella Hadid has taken to the Rodarte catwalk at New York Fashion Week in a polka dot ensemble very similar to a look sported by the Queen’s sister in the ’50s.

The model, 23, was princess-like in a belted white dress with red spots and matching collar and cuffs, which looked just like an outfit the glamourous royal, then 25, wore in Trinidad in 1955 during a Caribbean tour.

Bella’s look was complete with a white mini veil topped with a red rose, and red and white heels, also similar to Margaret’s. 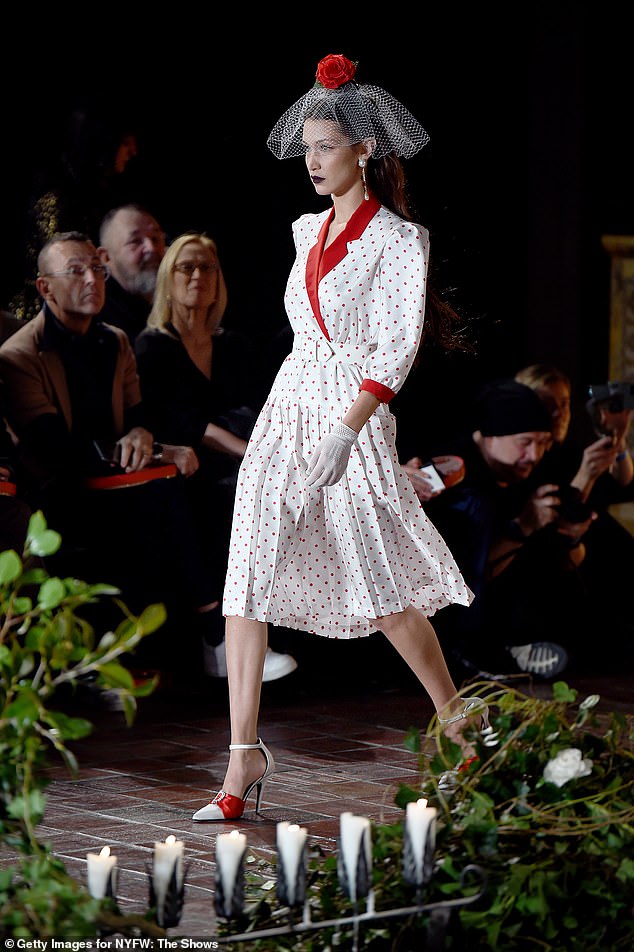 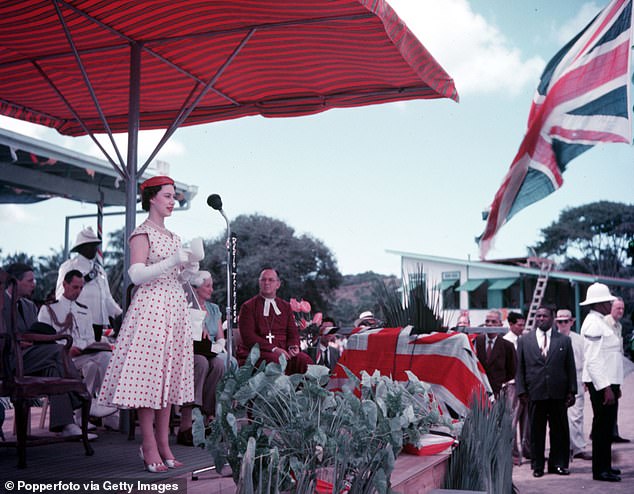 The 2020 dress channels the elegance of 50s glamour with its dotted detail, fitted waist and skirt and adds a modern twist thanks to its red lapel and shoulder pads.

The number worn by Margaret in Trinidad sported the same nipped-in waistline, tastefully highlighting the royal’s figure. but had shorter sleeves in a nod to the climate.

Hadid’s sophisticated hair accessory, made of a short bridal-like fishnet veil and topped with a crimson rose, added some whimsy to the high fashion look.

Margaret had also added another touch of red to her own outfit with a bright red cap perched on her brunette locks. 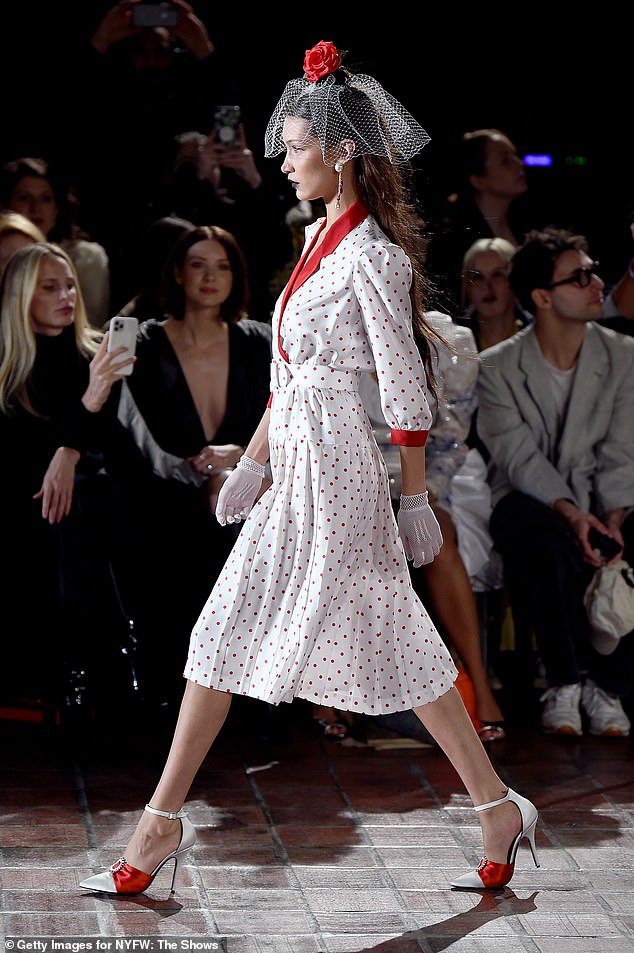 Bella Hadid cut a stylish figure in the glamourous dotted outfit. All elements of the looks, down to the bicolour shoes, sported touches of red (pictured) 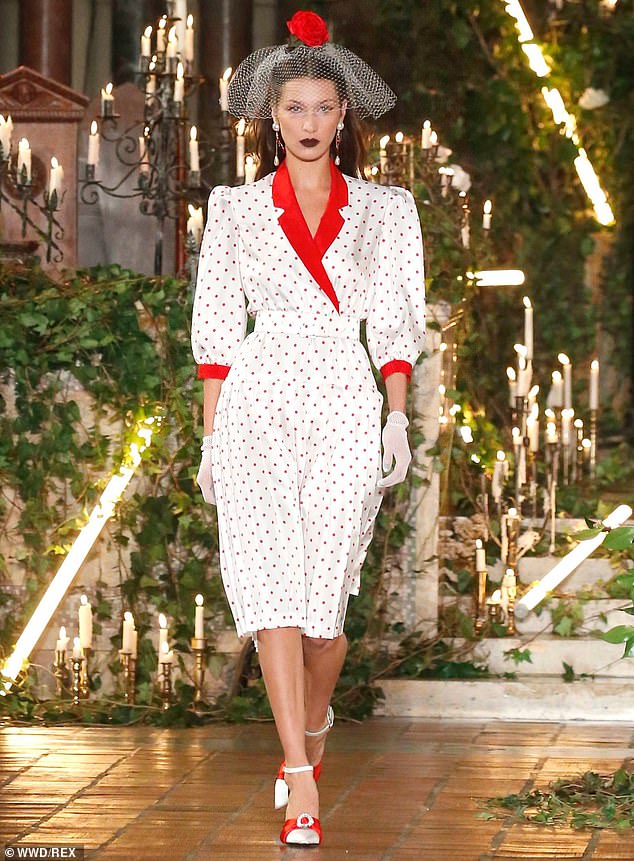 The supermodel was decked out in a ’50s-inspired ensemble, which featured an eye-catching shirt dress, fishnet gloves and satin heels. We love everything about this dress! The flattering design is cinched at the waist and has a timeless polka dot print, as well as a contrast collar and cuffs.

You will have to wait a while until you can get your hands on this number but, in the meantime, click (right) to shop the current collection. Alternatively, take your pick from the polka dot dresses we have listed below. With options ranging from Talulah and Steele to Emilia Wickstead, there’s something to suit every budget.

The numbers were similar down to the choice of shoes. Hadid wore bicolour heels to bring a touch of red to every element of her outfit.

Margaret had done the same, with a pretty dotted detail right above her toes.

Both sported stylish white gloves with Margaret wearing evening gloves reaching beyond her elbow, which were very fashionable among high society women at the time.

Hadid’s gloves were cut at the wrist and made of very fine material reminiscent of the veil on her head.

The choice of jewellery was also reminiscent of Margaret’s Trinidad look. The royal had banked on the effortless elegance of a pearl necklace, while Hadid sported a long pair of drop earrings made of two large pearls and red gems. 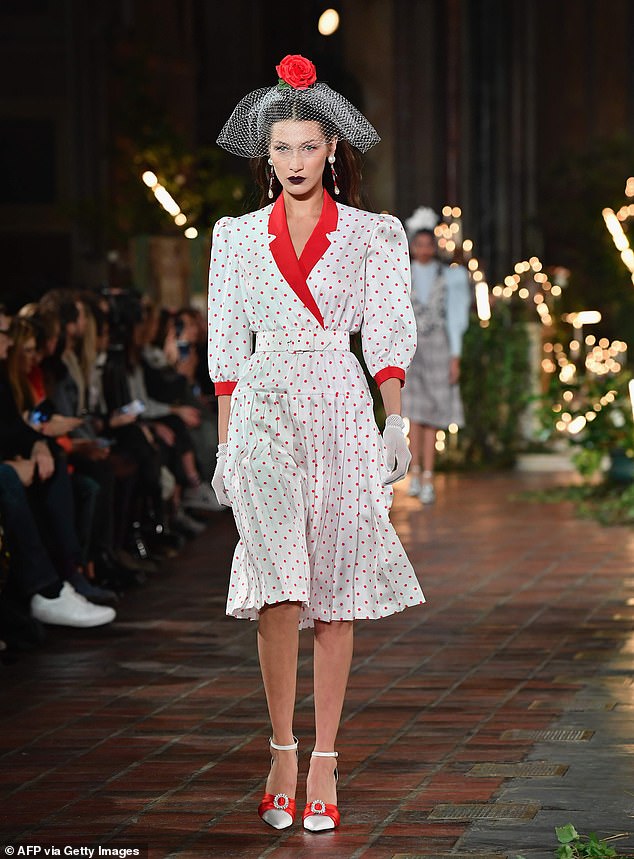