As a twenty-something woman, I remember my middle-aged relatives complaining that they’d had to all but knock drinking on the head, as they just couldn’t handle how it made them feel the next day.

At the time, I thought they were lightweight wusses. Today, I am one of them.

Like so many middle-aged people, I’ve found that it now takes relatively little to give me a crashing hangover the next day. Worse still, they seem to linger for an age. The last red-wine-induced hangover I had was so bad that I banned myself from drinking it.

But what if there was a magic potion that could enable me to have a couple of glasses of wine and feel no ill effects the next day? It may sound like fairy dust, but there are several products that claim to be able to diminish, or even banish, those hateful hangovers. 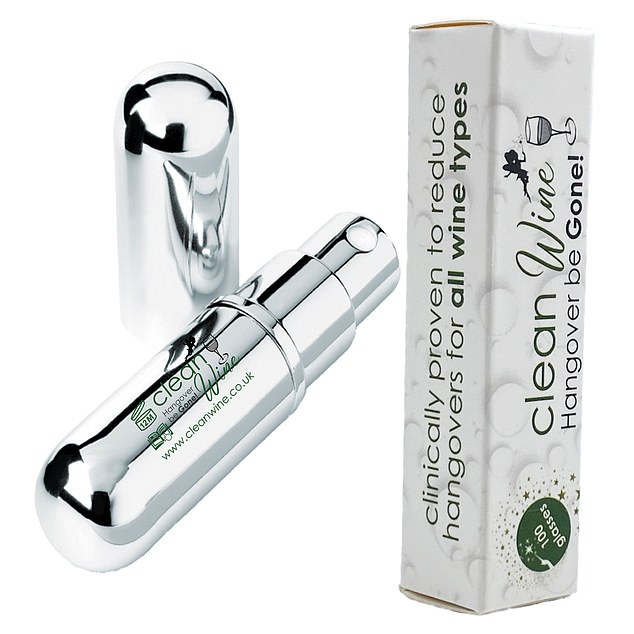 ‘Hangover be gone’ is the advertising slogan of Clean Wine, which produces handbag-size bottles of liquid spray that it says is ‘clinically proven to reduce, or even eliminate, the effects of a hangover after drinking wine’.

If you glance at a bottle of wine, you’ll see that the label usually says ‘contains sulphites’. These are the preservatives added to wine to stop it from going off. The theory is that, by removing these sulphites with a neutralising agent, you will also remove the hangover.

The firm states that it works on red, white, rosé and sparkling wines, as well as sweet wines, sherry and port. All you do is pump the required number of sprays into your glass before pouring and enjoying your wine — hopefully without the need to say: ‘I’ll be paying for this tomorrow’ as you take a sip.

My go-to drink these days is vodka, lime and soda, as I don’t want to wake up feeling like a herd of wildebeest trampled over my head in the night.

But I miss the taste of wine. So why not have a glass if Clean Wine could wash away my hangovers?

Ever hopeful, I ordered a £7.50 bottle. As per the instructions, I added two sprays to my empty glass before pouring a chilled rosé with a 12 per cent alcohol content. I swirled the liquid around as my glass clouded with condensation.

It’s key that Clean Wine is sprayed into an empty glass, which means you must drain your first before spraying and refilling. This may not be practical in a restaurant or bar where servers top up drinks.

I followed my first glass of rosé with a second, and felt a little tipsy. A friend called with a crisis, so I didn’t get to bed until really late. Was I going to regret that second glass? Amazingly, I felt as right as rain. No thumping head, no desperate craving for carbs and coffee. 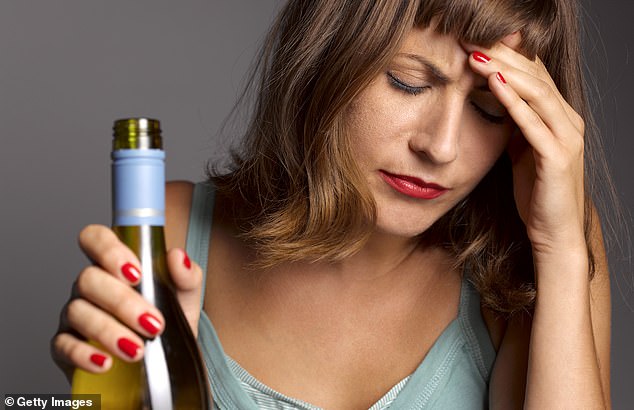 Two days later, I repeated the spray test, but this time with half a bottle of 8 per cent volume prosecco and, again, felt no ill effects the morning after.

What kind of witchcraft was this? As much as I’d like to believe it was fairy dust, the key ingredient is the far less magical-sounding hydrogen peroxide. That’s the stuff used in everything from hair dye to disinfectant. Thankfully, this is a safe, food-grade version that’s also tasteless.

Clean Wine and other sprays like it are marketed on the belief that it is the sulphites in wine that cause hangovers.

While some sulphites occur naturally in the fermentation process, ‘free sulphur’ is added as a preservative, and it’s this that can be neutralised by hydrogen peroxide.

The bad news is that most experts accept that hangovers are unlikely to be caused by sulphites, not least because they are also present in many foods, particularly cured meats and sausages. I can’t recall ever suffering a hotdog hangover.

‘Sadly, it’s the alcohol that gives you a headache,’ says Master of Wine Clem Yates. ‘Each wine has varying amounts of alcohol. Cool climate wine, such as from Germany, generally has a lower level. 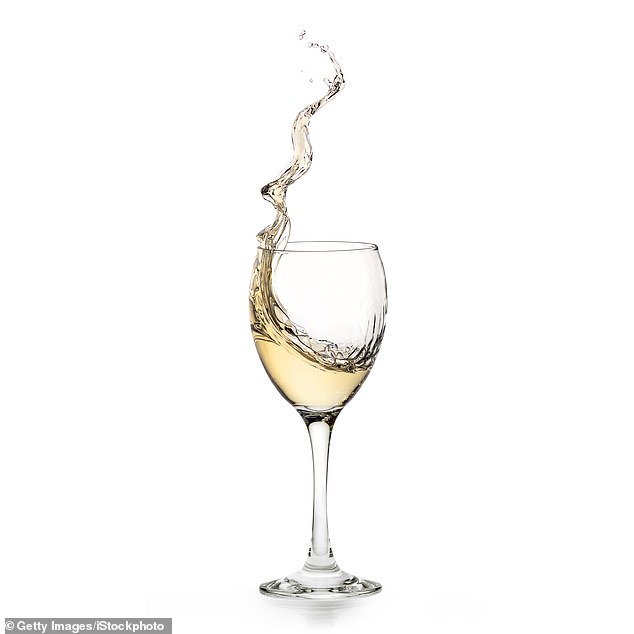 Claudia ignored advice from Clean Wine to avoid using the spray to ‘drink more than normal’, as she opened her favourite Sancerre with a 13 per cent alcohol volume (file image)

‘It relates to how much sugar is in the grape, which the yeast converts into alcohol.

‘So, the more sugar you have, the more alcohol your wine will have. Wine from New Zealand and Australia will have higher alcohol levels because their grapes are sweeter.’

Being a glass-half-full person, I still had faith in the magic spray, and decided to test it out on white wine.

Clean Wine tells you to ‘avoid binge-drinking’, drink ‘moderately’, stay hydrated and not use the spray to ‘drink more than normal’. But I throw caution to the wind, open my favourite Sancerre with a 13 per cent alcohol volume, and polish it off while having a box-set binge on the sofa. Despite feeling truly sozzled, I still remembered to blast every glass with the spray.

The last time I got really drunk, I bought a gazebo from the shopping channel QVC and wrote a love letter to my next-door neighbour, who I then had to avoid like the plague. 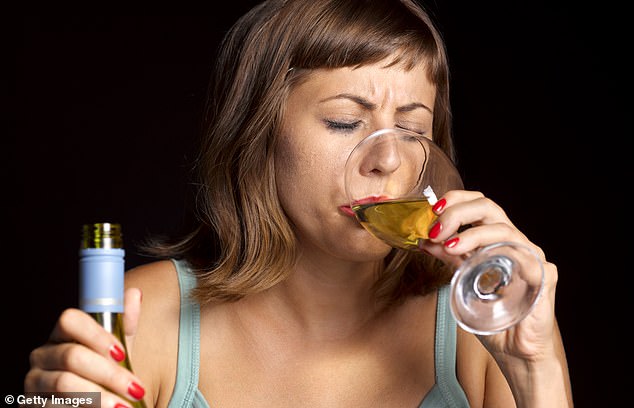 Claudia woke up with the worst handover she’d had in years, after polishing off a bottle of Sancerre (file image)

To avoid similar temptation, I took myself off to bed, safe in the knowledge I would awake feeling fresh as a daisy. Or at least that was the plan.

I woke up three times in the night with a pounding head and had to make myself an emergency sandwich at 3am. By 7am, I felt like death. It was the worst hangover I’d had in years.

After giving my poor liver a break, it was time for the ultimate test: red wine. One glass is usually enough for a headache to set in, two leads to me staying home in my pyjamas to eat my bodyweight in toast.

yet, in the name of science, I drank two large glasses of 13.5 per cent pinot noir, spraying each time with Clean Wine.

Despite eating a meal and drinking water, my headache kicked in even before I went to sleep. The next day, it felt like someone had set light to my brain, and the thought of doing a day’s work was unbearable.

There goes my miracle. 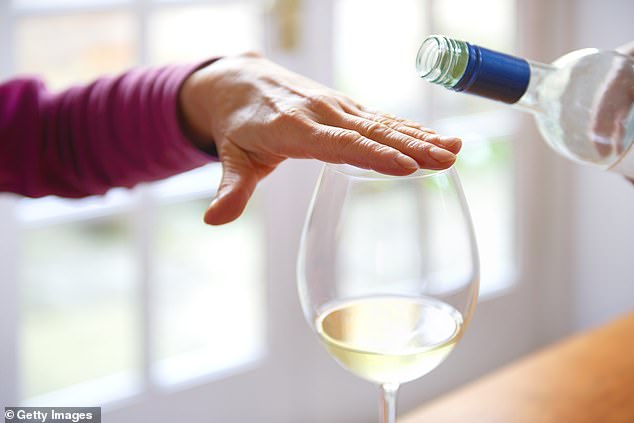 Claudia said despite the glowing testimonials on the Clean Wine website, she was unable to magic away hangovers (file image)

‘Hangovers are to do with hydration levels,’ says Clem. ‘If you’re really well-hydrated, you will suffer less of a hangover because the water in your body is diluting the alcohol. The older we get, the less capable we become of storing water, and that’s why some people could drink a bottle in their 20s and not feel the effect, but find it’s a different story in middle-age.

‘I would love there to be a spray that got rid of hangovers — I would buy a crate-load — but I’m afraid there’s no such thing,’ she adds.

Despite the glowing testimonials on the firm’s website, it seems I can’t magic away hangovers any more than I can magic away the calories in cake.

So, what is the answer to the misery of mid-life hangovers?

And, with that, red wine is back on the banned list.