The moment after you exchange vows at a wedding is usually an emotional occasion for most couples, but one pair raised eyebrows by whipping out their phones within seconds of saying ‘I do’.

A snap shared in the Facebook group Thats It, I’m Wedding Shaming, shows newlyweds – believed to be from the US – apparently logging into Facebook to immediately update their relationship status’.

Both were seen typing away on their phones as they stood next to their officiant in the photo, which was captioned: ‘Instead of doing a unity candle or sand ceremony, Danielle & James changed their Facebook statuses to “married”.’

Unimpressed members were astonished by the image and slammed the unidentified couple as ‘tacky’ and ‘peak millennial’. 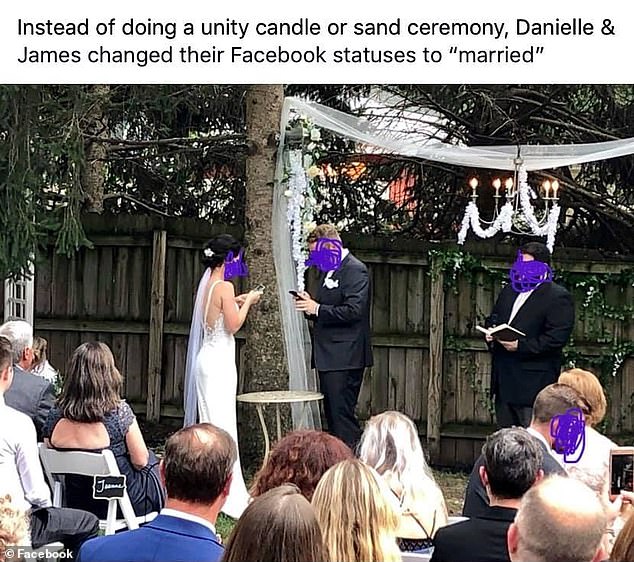 Newlyweds, believed to be from the US, are both typing away on their phones as they stand next to their officiant in a photograph (pictured) shared on social media, last week

One person wrote: ‘If that’s indicative of how their marriage is going to be, I expect they’ll be updating their statuses again real soon.’

Another said: ‘This is what the world has come to?! I’m giving up on society,’ as one person added: ‘This is peak millennial.’

‘Wow this is tacky as hell,’ a third added as another unimpressed social media said: ‘This isn’t cute or quirky. It’s ridiculous.’

However, some liked the idea, praising the newlyweds for their humor and creativity after ignoring the more traditional practices performed following a bride and groom’s nuptials.

‘This is tacky but also no one wants to watch you do a unity sand ceremony or candle’, an individual wrote.

Meanwhile another added: ‘I mean, most wedding traditions are super outdated so if they meant it as a joke then I think it’s pretty funny.’

‘Seems like a lot less problems than pouring sand or lighting a candle typically bring. Plus bonus points for hilarity and brevity’, a third social media user said.

A sand ceremony typically has the bride and groom pour different colored sand in one clear vessel to represent their unity. 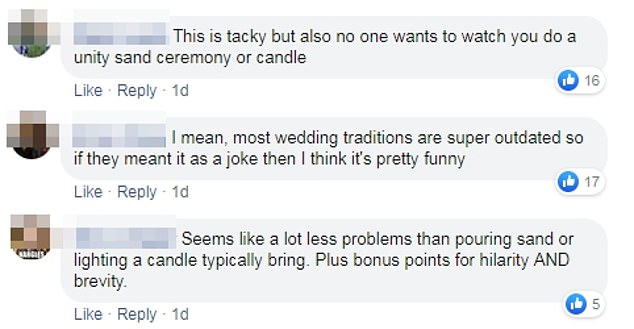 However, some people liked the idea, praising the newlyweds for their humor and creativity

Meanwhile, a unity candle is lit by couples after their wedding ceremony to represent their new beginning together.

Despite the caption, others suggested the newlyweds could be reading their vows from their mobile phones.

‘Did they though? Or did they have their vows typed up on their phones? I’d personally prefer to use a piece of paper but reading vows off a phone isn’t too uncommon nowadays’, one claimed.

Another said: ‘My guess is they were actually just reading their vows.’

Despite the caption, others suggested the newlyweds could simply be reading their vows from their phones

What to Look For in a Custom Paper Provider