The film is so fabulously festive it makes Father Christmas look like The Grinch.

In Christmas On The Square, Dolly Parton’s new musical currently streaming on Netflix, we’re introduced to the small American town of Fullerville, a ridiculously endearing fairytale place of twinkling lights and happy faces.

Here, tough guys do ballet on the square, customers tap dance through the bank, children have snowball fights among the fir trees and the juiciest gossip, imparted by a shocked local postie, is that ‘Mrs Hampton forgot to put figs in her figgy pudding!’

Things are so joyous you just know evil is afoot, and it arrives in the form of rich businesswoman Regina Fuller (Mamma Mia!’s Christine Baranski, gleefully strutting and snarling in perilous heels and blood-red leather gloves). 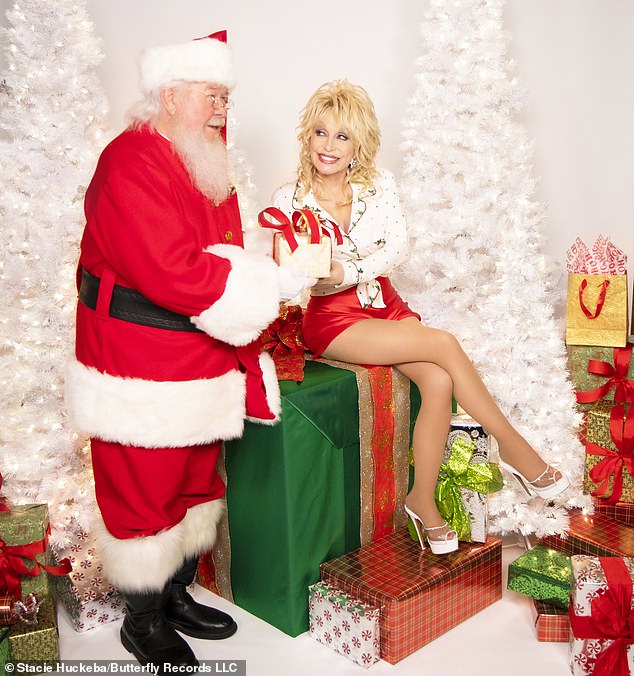 Dolly Parton, 74, who grew up in Tennessee, revealed her Christmas traditions as she releases her first festive album in 30 years. Pictured: Dolly gets a visit from Santa

She starts handing out eviction notices, announcing her plan to tear down the entire town and build a giant shopping mall.

‘Who would do this during the holidays?’ cries one of her victims.

‘Rich people who get tax breaks!’ she snaps back before flouncing off.

Will the town – and Regina’s soul – be saved through music and the magic of Christmas? Well, not to give away any spoilers, but since Dolly appears not only as an angel but also as a homeless woman, the answer shouldn’t be hard to guess.

Along the way there’s music from Dolly, dance routines choreographed by Debbie Allen from Fame, generous sprinkles of laughter, a few tears, a touch of romance and more Christmas spirit than a month under the mistletoe.

And that, says Dolly when we meet over Zoom, is just how she likes it.

‘I love Christmas!’ she beams. ‘I love the lights, the trees, the decorations, the presents, the food… and singing all those great songs about Jesus.

‘It was a real special time when I was a youngster, and even though we didn’t have any money I have special memories of it. 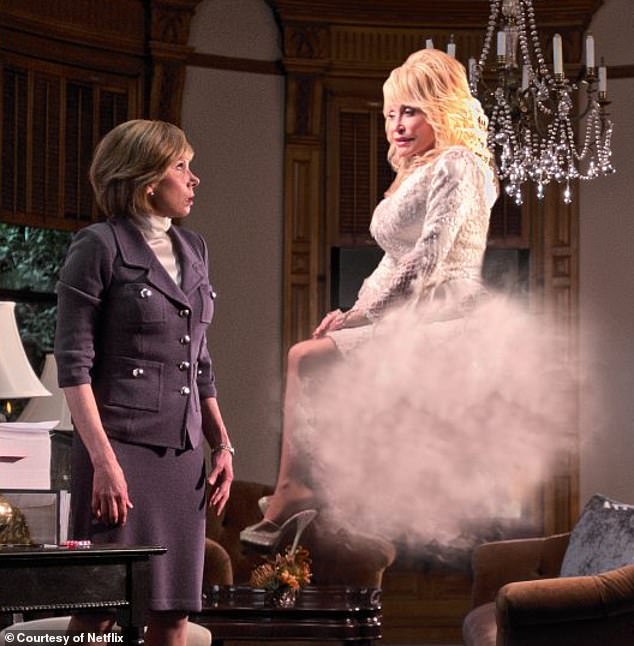 ‘I always tell a story about the year my mom had a house full of kids and she’d never had a wedding ring, and this one year we decided with Daddy we were going to pool all our money and do whatever we could to buy Momma a wedding ring. That was a good year.’

She won’t need to be pooling her money with anyone this year. With 25 Number One singles on the Billboard Hot Country Songs chart and 44 Top Ten country albums, her thriving production company Dixie Pixie Productions and her own theme park (Dollywood in the Great Smoky Mountains of Tennessee), she’s worth an estimated £375m today.

‘Miley is my little fairy goddaughter!’ she says proudly. 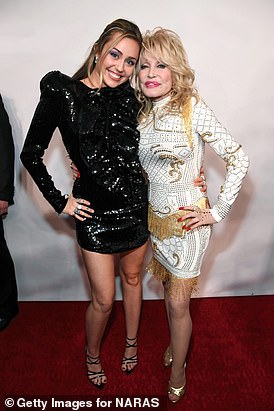 ‘I’ve known her since before she even came out! I was good friends with Billy Ray and Miley’s mom, and they said very early on, “You have got to be her godmother.” So that’s what I am.

‘I’ve loved her all her life, I think she’s the smartest, sweetest, most talented, most crazy…’ She stops herself. ‘But in a good way!’ she adds hastily.

‘And I relate to that. I was very proud that she sang the song Christmas Is with me on the album. She and Billy Ray are like family to me. We don’t spend a lot of time together but we’re very close.’

Which is handy, given the Parton family is a big one. With her nine surviving siblings (one brother died in infancy and another brother, Floyd, died two years ago), their partners and a head-spinning assortment of nephews and nieces, she says the gatherings that usually take place at her house at Christmas are a sight to behold.

‘I believe in making the most of everything, and Christmas is a most special time of year for us. I always try to have my little nieces and nephews that live in the area come over and spend the day and night with me.

‘We make cookies and tell stories, and do all sorts of fun things. That’s part of the tradition – with good food and as many family around as we can share it with.’

Another Dolly tradition is making a Christmas TV movie – she has five under her belt now. ‘This year is a good time to have a feelgood musical with all the struggles we’re going through,’ she says.

‘We need this. We filmed it last year before the Covid thing hit, so we’d done all the work and had it ready for Christmas. The timing couldn’t have been better.’

To accompany the movie Dolly has released her first festive album in 30 years, A Holly Dolly Christmas, featuring a mixture of new songs and old classics with guest appearances by artists such as Michael Bublé, Willie Nelson and Miley Cyrus.

‘I wanted to do something special this year because it’s been so loony,’ she says.

‘I didn’t want to lay around and not be productive. We made the album in the summer so we did have the pandemic to think about, but we managed to do it in a very safe way.

‘We sent out the parts to different artists in their own studios and talked on the phone – who’s going to sing here, what do we want to sing there. So believe me we did it smart, we’re not fools.’

One thing Dolly Parton never has been is a fool. This was something of a novel concept for the Nashville powerbrokers when as an 18-year-old – fresh from a two-room cabin on the banks of the Little Pigeon River in Tennessee, with sky-high hair, bursting bosoms and taloned fingernails – Dolly first hit town looking for stardom.

‘I’m sure I wasn’t taken serious in my early days,’ she shrugs. ‘Just because of the way I look. I kind of created my look because it was how I felt pretty.

‘It was serious to me because it was the country girl’s idea of glamour, and I think because of it, at first people might not have taken me as seriously as I take my talent. Hopefully by now they know I’m serious about everything I do.’ 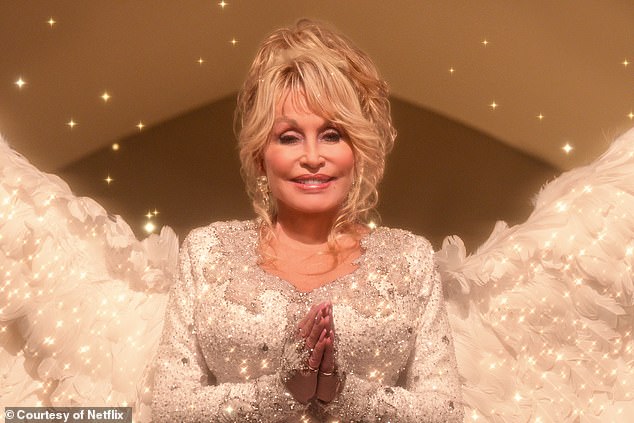 Dolly (pictured) donated $1 million (£750,000) to the Vanderbilt University Medical Center in Nashville, a trial site for the Moderna Covid-19 vaccine in April

She’s also someone who likes to share her wealth. Dollywood has given an economic shot in the arm to the previously depressed region, and she’s also founded a childhood literacy programme, Dolly Parton’s Imagination Library, which operates in America, Britain, Canada, Australia and Ireland.

Last month it was revealed that back in April she donated $1 million (£750,000) to the Vanderbilt University Medical Center in Nashville, a trial site for the Moderna Covid-19 vaccine, and that her contribution has been a significant help in its development.

‘I’ve always wanted to share whatever I’ve made with other people,’ she says. ‘When you get into a position where you can help, I honestly believe you should.

‘So any time I can give I try to help in any way I can because my heart says, “Do it.” It’s my way of giving back. God’s been good to me, so I try to be good to other people.’ 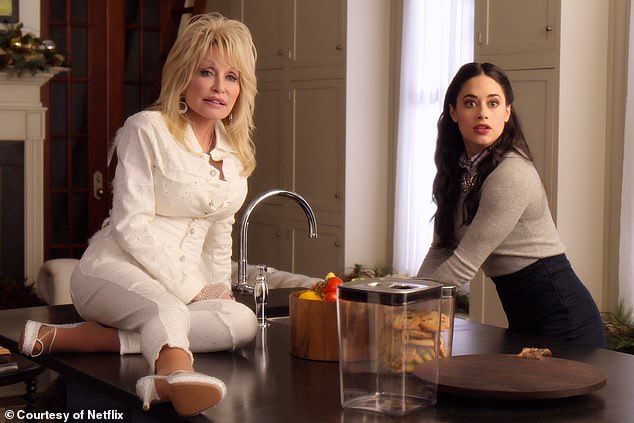 Dolly who will be age 75 in January, said she’s very proud of the years she’s spent doing what she does. Pictured: Dolly and Jeanine Mason in Netflix film

Dolly and her husband, retired businessman Carl Dean, have one of the most solid marriages in showbusiness, and in the past she has said their secret is that they spend a lot of time apart.

Yet she insists she’s enjoyed the excuse the crisis has given her to slow down and spend more time at home.

‘I never get to spend as much time with my husband as I’ve wanted to because I’ve always been on tour,’ she says.

‘Carl’s a loner – he’s from a family of three and they’re very different from our family. But he and I have a lot in common and we enjoy being together, so it was nice to be able to do that.’

Not bad going for 54 years of marriage and a woman of nearly 75.

‘So don’t rush me, I’ll get there soon enough. But I’m very proud of the years I’ve spent doing what I do and I hope to be at it for another 75 years!’

Christmas On The Square is available to stream on Netflix. A Holly Dolly Christmas is out now.