Emily Ratajkowski has opened about about what it means to her to be ‘hyper feminine’, while posing with her armpit hair on full display to prove a point about a woman’s right to choose.

The 28-year-old model penned an essay for Harper’s Bazaar about her journey toward embracing her femininity however she wants — whether it be with clean-shaven armpits or long body hair.

Emily’s journey towards embracing the term ‘hyper feminine’ started when she was attending the University of California, Los Angeles, and taking a gender studies class, she wrote. 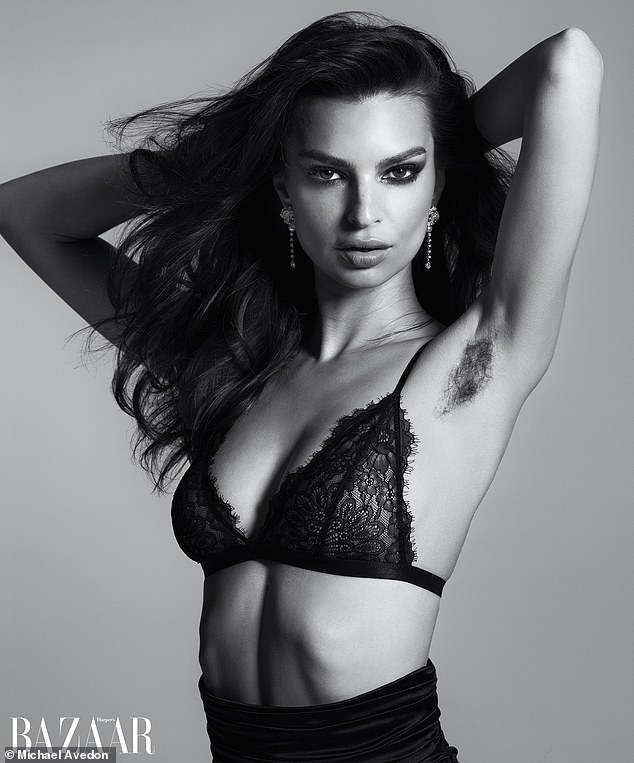 Speaking up: Emily Ratajkowski, 28, penned an essay about her femininity for Harper’s Bazaar where she stated women growing their body hair demonstrated their right to choose 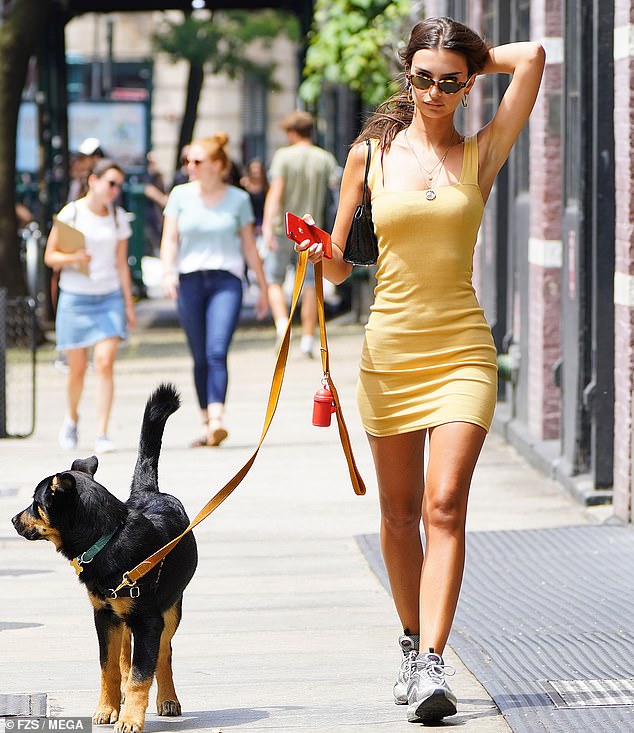 Her choice: Although Emily said she most often felt better without body hair, as she was seen this week in New York, she said she sometimes feels ‘sexy’ with the hair

‘At the time I considered myself a staunch feminist and had signed up for the class assuming that I’d learn a lot about women’s lib, feminist rhetoric, and so on,’ Emily wrote. ‘I was shocked by how little I understood about gender, and it made me start to examine my own identity as a woman.’

Emily then prefaced her above statement by recognizing her ‘privilege’ of being a ‘cis white woman.’ 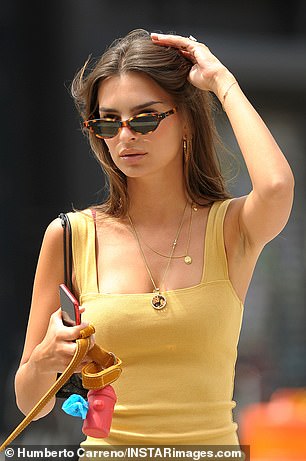 Embracing femininity: Emily’s essay spoke about what it mean to her to be feminine and still speak out about important issues

‘I’m well aware of the privilege I receive as someone who is heteronormative, and I don’t pretend to act like my identity hasn’t made some things easier for me,’ she wrote, adding: ‘That being said, I want to take this opportunity to speak up about what my experience as a woman has been.’

She then detailed how the term ‘hyper femme’ first was brought up to her by a friend who decided to make an ‘oversimplification’, in Emily’s opinion, about the model’s identity.

But this offhanded comment got Emily thinking about what it meant to her to be feminine and how she wanted to feel unashamed for embracing her sexuality in any way she wanted.

‘I realized then that my feeling was in part because of those countless experiences — experiences in which men and women had told me that if I dressed a certain way I wouldn’t be taken seriously and could even be put in danger,’ she wrote.

‘As a fully grown woman, I continue to be shocked by how, in 2019, we look down so much on women who like to play with what it means to be sexy.’

One specific moment Emily referenced was when she was arrested in Washington, D.C. last year after protesting the Supreme Court nomination of Brett Kavanaugh, who was accused of sexual assault. 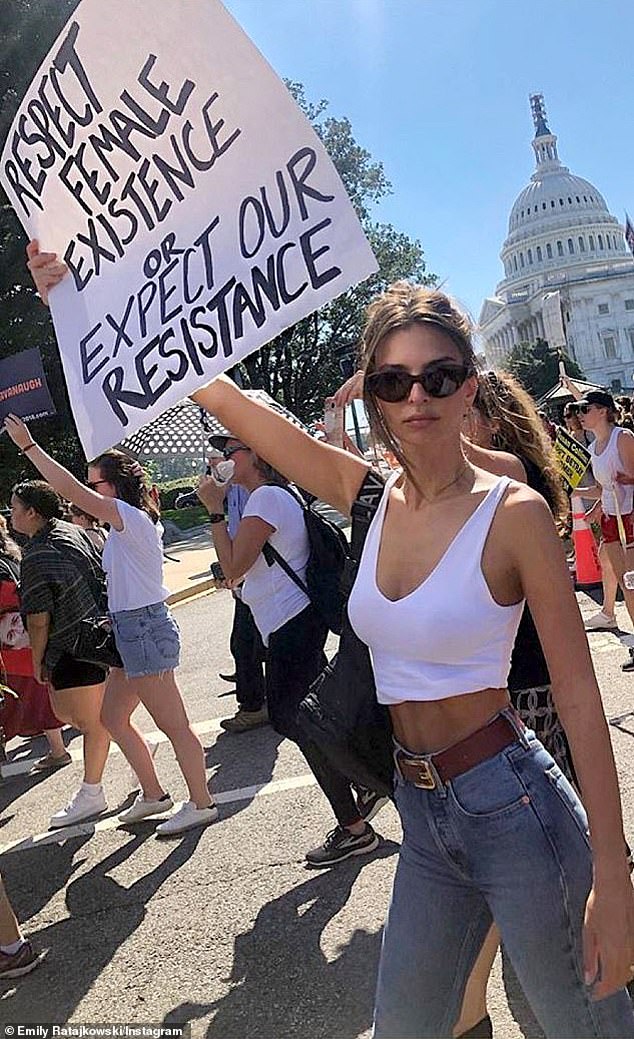 Protest: The essay mentioned Emily attending a protest in Washington, D.C. last year to speak against the Supreme Court nomination of Brett Kavanaugh 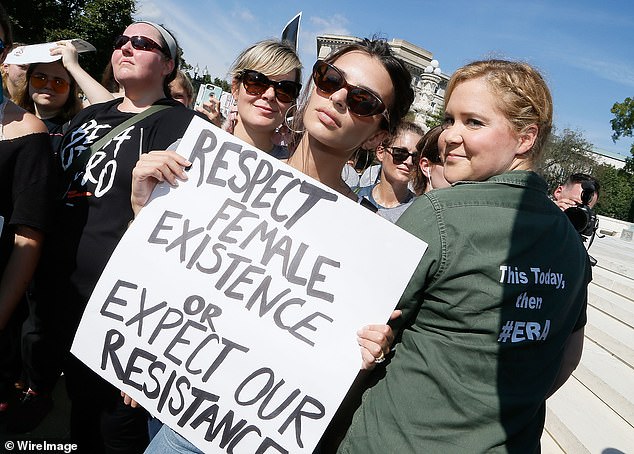 Important: Emily, pictured with Amy Schumer, spoke about how there was more focus on what she wore instead of what she was protesting against, which she thought was a problem

During the protest, Emily walked alongside I Feel Pretty co-star Amy Schumer to voice their disdain for the nomination.

But Emily said it was another moment when her femininity was used against her in an attempt to diminish her voice.

‘The headlines were not about what I was protesting but instead about what kind of shirt I was wearing,’ she wrote.

‘Even women from the left, who fully supported the purpose of my protest, made comments about my missing bra underneath my white tank and jeans. In their minds, the fact that my body was at all visible had somehow discredited me and my political action. But why?’

She continued: ‘If I had chosen not to wear that tank without a bra, that would have been okay too.

‘If I decide to shave my armpits or grow them out, that’s up to me. For me, body hair is another opportunity for women to exercise their ability to choose — a choice based on how they want to feel and their associations with having or not having body hair.’

This type of thinking inspired Emily to pose for Harper’s Bazaar and bare her armpit hair instead of showing off shaved pits.

Emily said most days she prefers to shave that area of her body, as the model was recently pictured out in New York City showing her shaved armpits, but she also feels ‘sexy’ sometimes not shaving.

‘And there is no right answer, no choice that makes me more or less of a feminist, or even a “bad feminist,” to borrow from Roxanne Gay,’ Emily wrote. 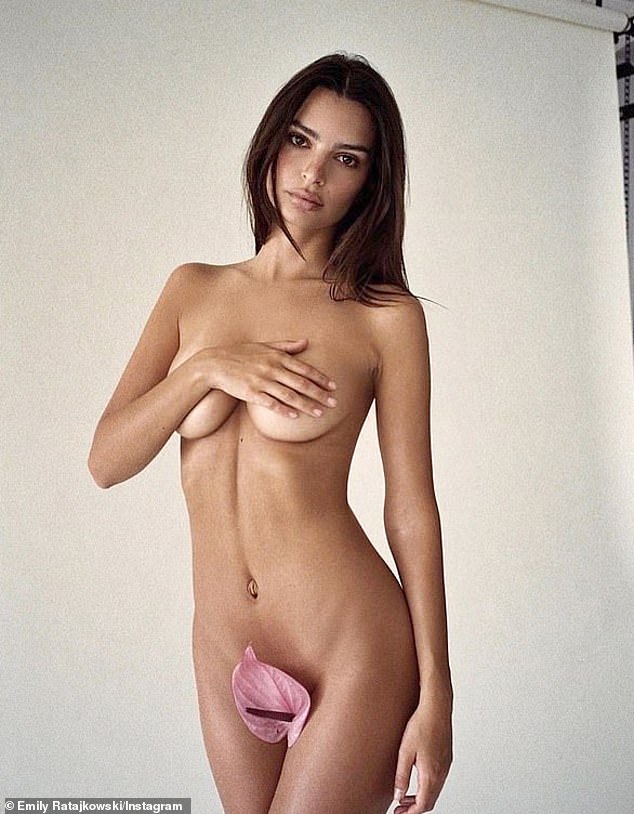 Making her point: Another moment Emily chose to embrace her sexuality while speaking on an important topic was when she spoke about reproductive rights earlier this year

Another moment when Emily decided to embrace her sexuality and femininity while speaking about an important issue was when 25 white male state representatives voted to ban abortion in Alabama, even in the cases with incest and rape, earlier this year.

‘These men in power are imposing their wills onto the bodies of women in order to uphold the patriarchy and perpetuate the industrial prison complex by preventing women of low economic opportunity the right to choose to not reproduce,’ Emily wrote in an Instagram post.

‘The states trying to ban abortion are the states that have the highest proportions of black women living there. This is about class and race and is a direct attack on the fundamental human rights women in the US deserve and are protected by under Roe vs. Wade. Our bodies, our choice.’

She chose to pose nude when sharing her message with just a single flower petal covering her nether regions.

‘I’m definitely not saying that every woman needs to connect with their inner Thotiana; I’m just making the point that women can and should be able to wear or represent themselves however they want, whether it’s in a burka or a string bikini,’ Emily wrote at the end of her personal essay.

‘Ultimately, however one decides to represent themselves, whether it be heteronormative or completely unidentifiable, is that person’s personal choice. Give women the opportunity to be whatever they want and as multifaceted as they can be. Preconceptions be damned.’