There are not many women who would go off to make a film in the wilds of the Australian bush with their two-month-old baby in tow.

But then there aren’t many women like Eva Longoria.

Just eight weeks after the birth of Santiago Enrique Bastón, the product of her marriage to Mexican television magnate Jose Antonio Bastón (known affectionately to Eva as Pepe), she was offered the role of Elena, the anthropologist mother of children’s cartoon favourite Dora The Explorer in the live-action feature film Dora And The Lost City Of Gold, which takes happy-go-lucky Dora into her teen years and a new set of adventures.

Actor, director, producer, political activist and former Desperate Housewife, even Eva admits that she at first blanched a little at the challenge. 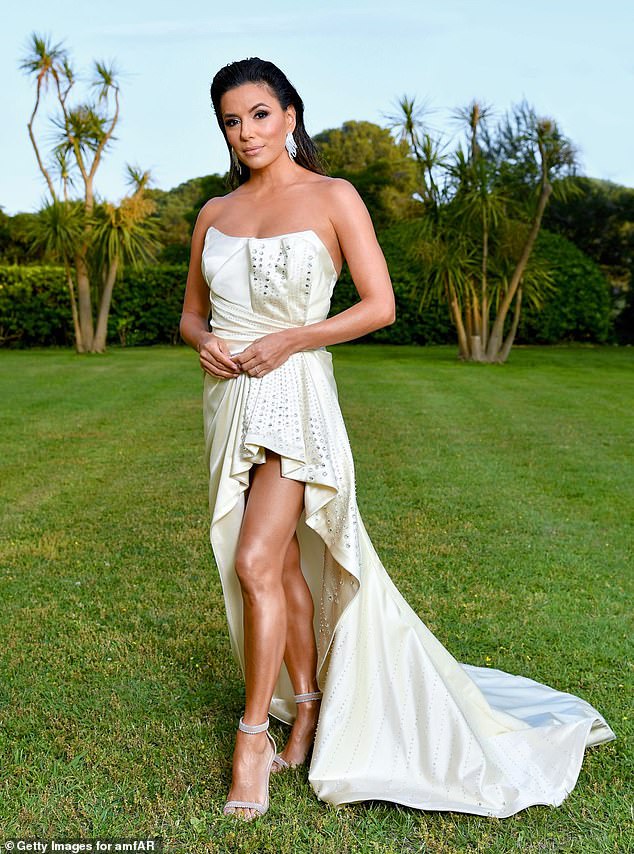 ‘Santi was two months old and I was still breastfeeding.

‘I remember telling my husband, “I’m not going to be able to do this, I can’t go all the way to Australia.”

It’s a long way from Wisteria Lane, where Desperate Housewives, the drama-mystery-black comedy about a group of women living in seemingly idyllic American suburbia, was set.

It’s been seven years since the lights last went out on its inhabitants (played by Eva, Teri Hatcher, Nicollette Sheridan, Marcia Cross and Felicity Huffman), but Eva says she still misses the series.

‘I miss being Gaby, I miss my TV husband Carlos.

‘But it was time for us to end: I think it was different for us from the way it was for Sex And The City or Downton Abbey, because they only went on for a few years and had fewer episodes in a season.

‘We did 23 or 24 episodes a season for eight years. By the end I was thinking, “OK, I can’t sleep with one more person on this street!” We really had run out of options for the story.

‘But having said that, it was a magical time of my life. I miss the girls and acting with them, and I miss Wisteria Lane. 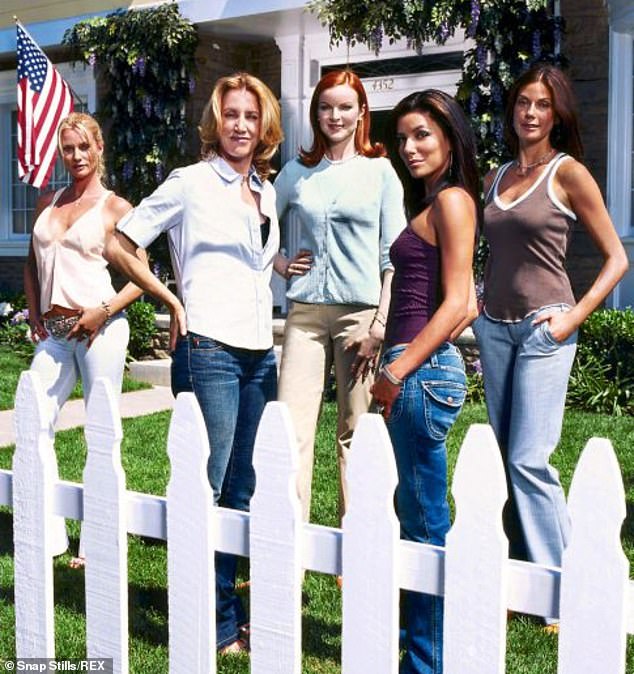 ‘The set is up on the tour at Universal Studios now, and every time I go to the studio I’ll stand on my lawn and a tram will pass by and everyone will say, “She’s there!” And I’ll wave and say, “I don’t actually live here, but hi anyway!”’

She’s been vocal in her support of former castmate Felicity Huffman, who recently pleaded guilty to a fraud charge, having been implicated in a public exam cheating scandal to help her daughter with her college application.

‘She has a heart that’s bigger than the sun,’ she said recently.

Today she refuses to speak further about the matter, but does add that despite continual rumours of rifts between the Desperate Housewives cast members, they were, and remain, the best of friends.

‘I couldn’t have survived all those years without that female friendship,’ she says. ‘It was authentic.

‘I remember back in the day when there was so much drama about our relationships and it was so odd to me, because we loved going to work, we loved being together and we knew what we were doing, and the chemistry between us was special.

‘They don’t create all that drama about male shows!’ 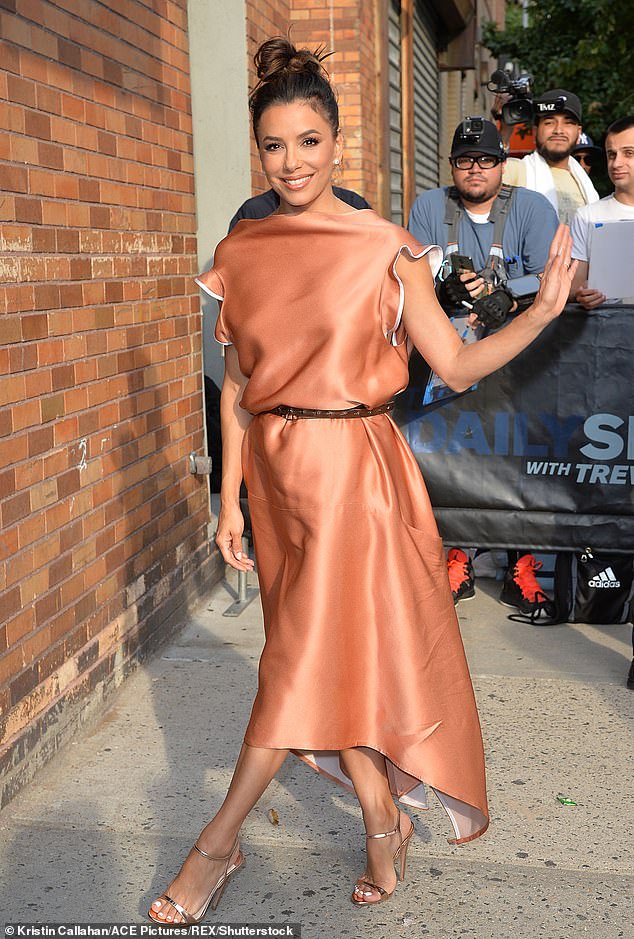 In the new film, Dora’s parents (played by Eva and Michael Pena) send the teenaged Dora (Isabela Moner) from the South American jungle where they have raised her to have some ‘normal’ experiences in high school in California, while they set off to discover a lost Incan city made of gold.

Dora and her friends are kidnapped by mercenaries looking for her parents and taken back to South America, where they’re released by a bumbling academic and set off to find Dora’s parents and discover the golden city.

Cue jungle adventures, both on screen and off.

‘You’d show up on the set and they’d give you a machine and say, “Put this in your pocket, it gives out a frequency that keeps all the bugs away.

‘And never leave your trailer without these long boots in case of snakes.” And it was definitely hard to breastfeed on set,’ she says.

‘There were places you just couldn’t go, with the animals, the ticks, the mosquitoes… I would have to drive all the way back to base camp or to my trailer, do the feed, then go back to the set.

Eva was 24 when she arrived in LA from her hometown of Corpus Christie in Texas, just another former beauty queen and holder of a degree in kinesiology, the study of body movement, looking for fame and fortune. 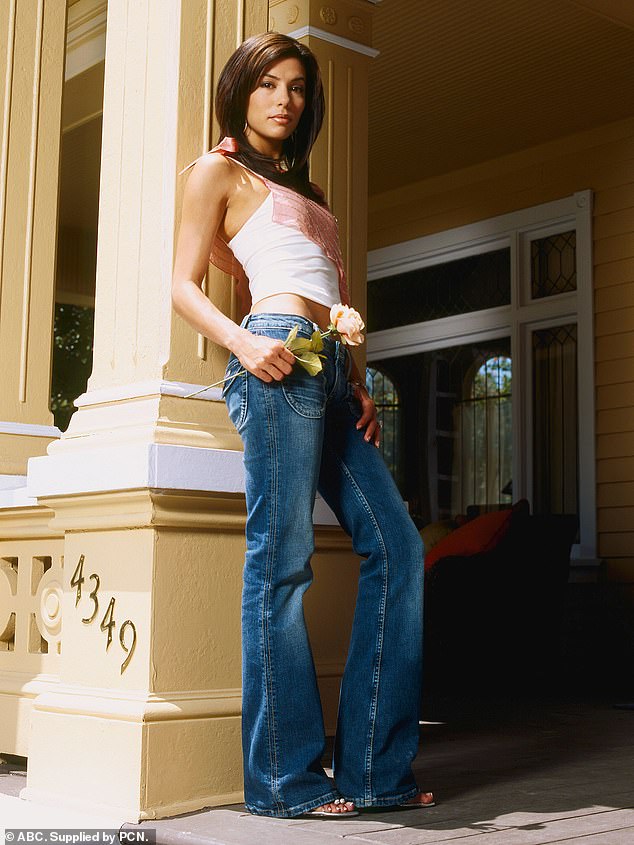 Eva, who arrived in LA at the age of 24, guest-starred in Beverly Hills 90210 and had a two-year stint on The Young And The Restless before Desperate Housewives (pictured)

She’d barely left the airport when she was guest-starring in an episode of Beverly Hills 90210, which led to a two-year stint on the daytime soap The Young And The Restless and then Desperate Housewives.

‘But I don’t particularly think I was born to be in this business,’ she says.

‘When I was young people said to me, “What do you want to be when you grow up?” and I’d just say, “Successful.”

‘All the way to college I didn’t know whether I wanted to be a lawyer, a doctor or an actor. I guess I was just curious.’

Ask her whether she thinks Santiago will follow her into the business and she just laughs.

‘I don’t know how much of that is nature versus nurture. My feeling is that leading by example is all you can really do.

‘I hope he’ll see that I work hard, that I have goals and that I respect the value of a dollar.

‘That will be more beneficial than asking him, “What do you want to be when you grow up?”’

Dora And The Lost City Of Gold is in cinemas now.