A gang of graffiti-loving grandmothers praised their ‘wonderful’ hobby during an appearance on This Morning, before teaching hosts Holly Willoughby and Phillip Schofield how to spray paint.

The four women, from Aberdeen, appeared on the programme to talk about their unconventional pastime.

Pearl Cameron told how she has been practising the art since she was 68, and was encouraged into it by her grandson.

Along with three pals, she helped Holly and Phil ‘tag’ the This Morning studio wall with bold stencils of their faces, with Holly calling the hobby ‘so great’. 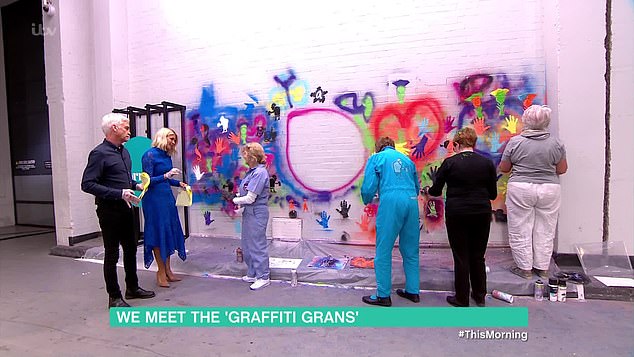 Holly and Phil joined the graffiti grandmothers on This Morning, as they took to spray painting a white wall at This Morning 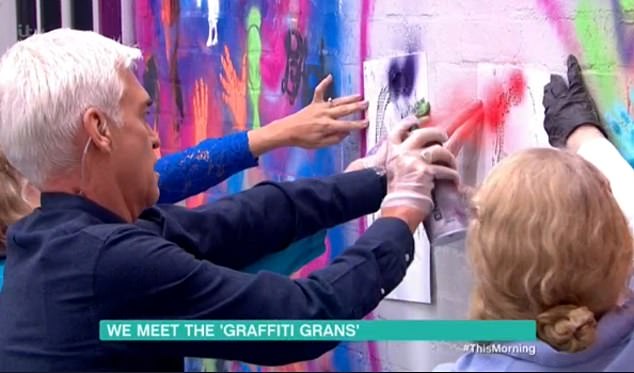 The hosts even took up spray painting themselves, with Holly admitting that she liked it, exclaiming ‘this is great’

Pearl, Rosemary Murray, Dorothy Bothwell and Anne Yule appeared on This Morning to show off their artistic skills.

The four women admitted they’d got into spray painting via different ways, and they’re now part of a group which allows them to leave their artwork on authorised walls in Aberdeen.

Pearl called it ‘a wonderful’ hobby, saying: ‘There’s a lot of young people inside the old ones.’

She revealed her ‘tag’ is a combination of two hearts – inspired by the fact she underwent a heart transplant in 1995. 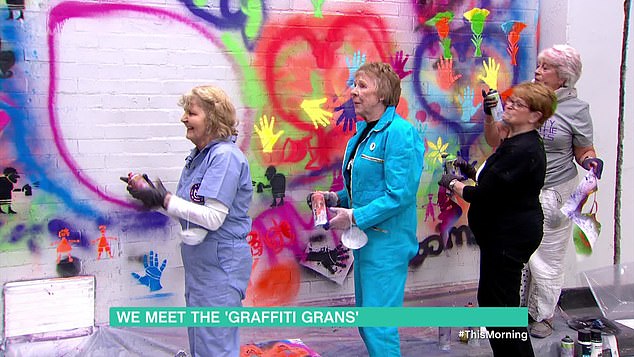 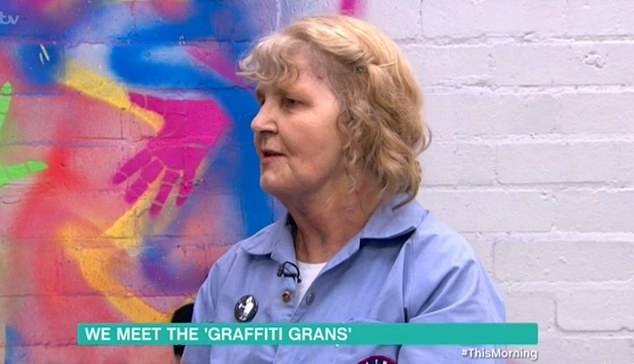 Pearl revealed she found the hobby ‘wonderful’ and said her tag was personal to her, as it represented her heart transplant

Meanwhile rebellious pensioner Rosemary left Holly and Phil in stitches after she said: ‘Well if you have permission and if it’s been authorised. Aberdeen Inspired fund all the walls which were available.

‘Graffiti is not graffiti if it’s legal. But if you do do it. Run.’ With Holly and Phil giggling, she clarified: ‘So don’t get caught.’ 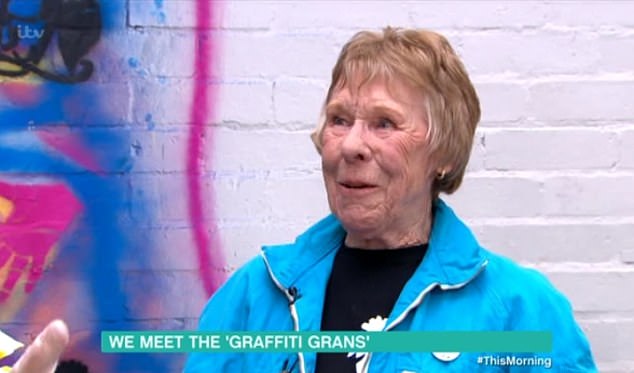 Rosemary told Phil that if they were caught illegally painting, they should ‘run’. She was one of four grandmothers appearing on This Morning to discuss their unusual hobby 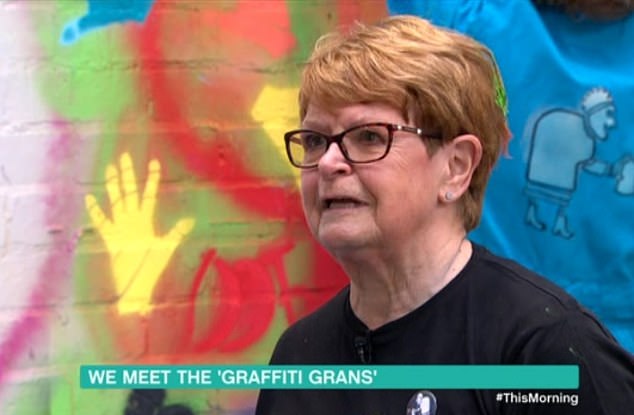 Dorothy Bothwell, 82, is a retired headteacher, who now loves getting messy with her fellow graffiti artists

Dorothy Bothwell, 82, appeared covered in paint in the chaos of the segment, having been caught in the fire of one of the other grandmothers

In the chaos of the segment, Dorothy, 82, who worked as a headteacher, appeared happy to get her hands dirty as her hair ended up coated in paint.

Speaking about her passion for spray painting, she said: ‘It feels like being let loose and being allowed to do all of the things you weren’t allowed to do as a child.’

The fourth grandmother, Anne, admitted her grandchildren were left ‘puzzled’ by her unconventional hobby.

Armed with their stencils, the women went on to assist the This Morning hosts in their first experience of wielding a spray paint can. 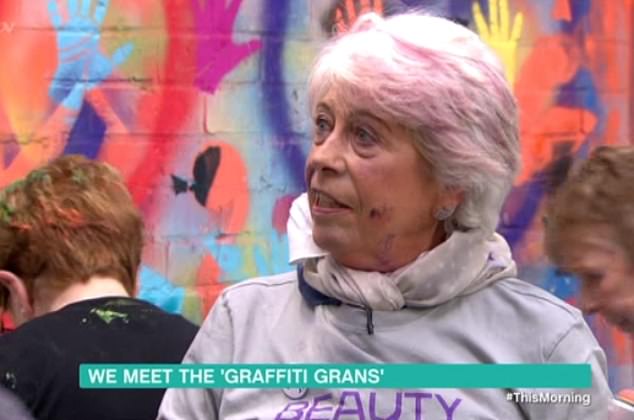 Anne Yule admitted that her grandchildren were ‘puzzled’ by her messy hobby, but said she loves it 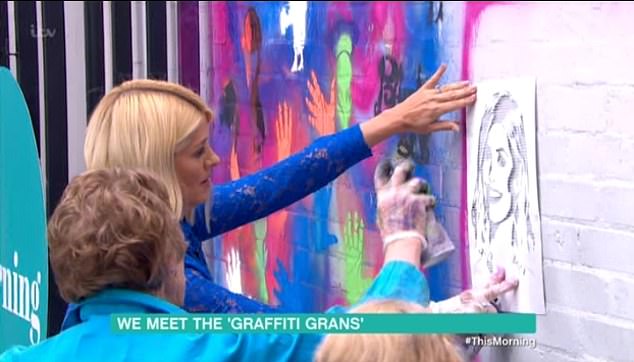 As Holly had placed the glove on the wrong hand, she held onto the stencil, while Rosemary wielded the spray paint can for her 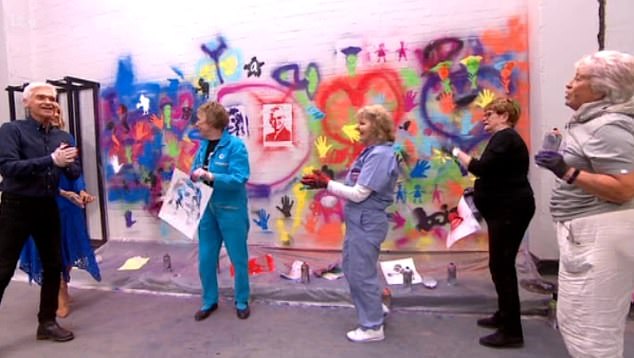 The team of rebellious grandmothers looked overjoyed with the This Morning presenters’ efforts, having taught them exactly what to do 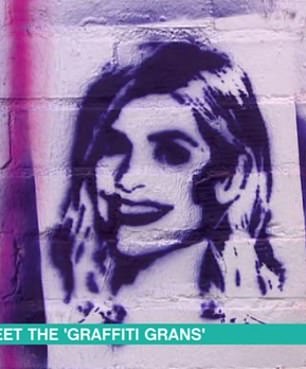 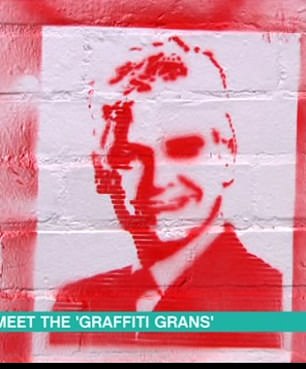 Beckoning Holly and Phil closer to the wall, the grans instructed the presenters to get ‘quite close’ to get the best results.

While Holly admitted she’d put the glove on the wrong hand, Phil positioned his stencil and started spraying.

Holly got very involved in applying her purple-coloured paint onto the stencil, exclaiming: ‘Oh I like this!’ 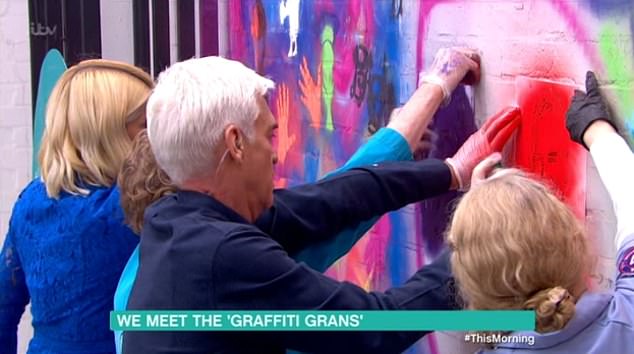 Holly and Phil were beckoned closer to the wall by the grandmothers, who were keen to help them perfect their street art skills

Speaking as the hosts began spraying, one of the grans instructed: ‘We’ll be ready to whip it away as soon as you’re finished.’

They shouted their encouragement, telling Holly and Phil: ‘Cover it all, cover it all. Closer, closer!’

Holly and Phil seemed overjoyed when the stencils were removed, leaving their handiwork behind, with Holly exclaiming: ‘Oh this is so great.’