A heartbreaking scene showing a woman, 40, being supported by A&E medics as they turn off her life support machine has left viewers in tears.

In last night’s episode of Casualty 24/7 on Channel 5, junior doctor George Kay and his team battled to save the life of an unnamed 40-year-old woman at Barnsley Hospital in Yorkshire who had gone into cardiac arrest.

In the emotional segment, the team of dedicated doctors tried their best to resuscitate the woman, but their efforts didn’t pay off and they collectively decided there was no choice to turn the patient’s life support off.

As the other members of the team got called to other cases, Dr George Kay and lead nurse Hannah Ryan stayed behind with the woman, who had arrived at hospital alone and had no family around her.

As they detached her from the machine, they held her hand throughout.

Dr Kay explained these difficult moments were heartbreaking but part of the job, and stressed he couldn’t let his emotions get in the way of his duty.

Viewers were heartbroken for the woman, but praised Dr Kay and Nurse Ryan for their compassion. 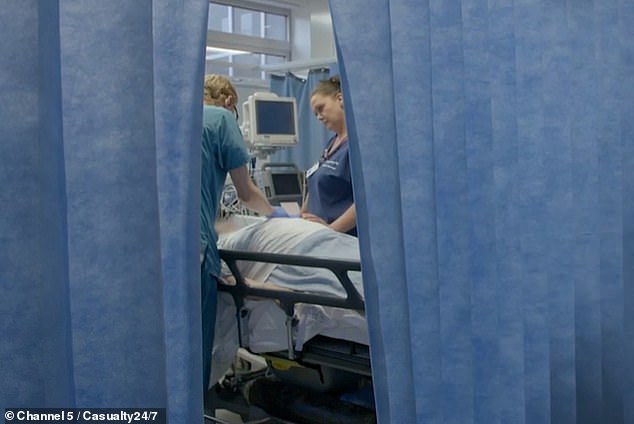 Viewers were touched by the segment and sad to see the woman die alone. However, they praised Dr Kay and Nurse Ryan for holding her hand til the end

‘How sad that lady had no relatives with her when she passed but at least the doctor and nurse were with her,’ one wrote.

‘The lady that died didn’t seem to have any family, it was nice the nurse held her hand as they switched off life support,’ another said.

‘My eyes are leaking,’ another wrote.

‘That’s really sad that that lady has died. But how lovely and reassuring to see that a doctor and nurse were there, holding her hand until the end,’ one said. 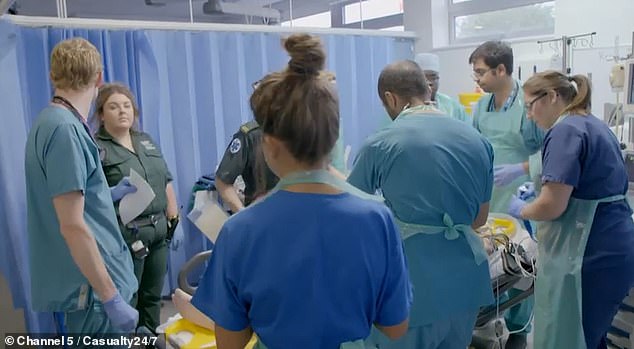 ‘Thank you Hannah & George for staying with her,’ one wrote.

When the woman arrived at Barnsley A&E, a paramedic was already performing CPR.

As the ambulance team handed her over to the resuscitation team, they revealed she didn’t have a regular pulse when the paramedics found her.

While in the ambulance, her heart stopped for a second time. At first, the team believed they had managed to revive her as the woman spontaneously started to breathe again.

But then her heart stopped once more, and they had to take turns performing manual CPR. 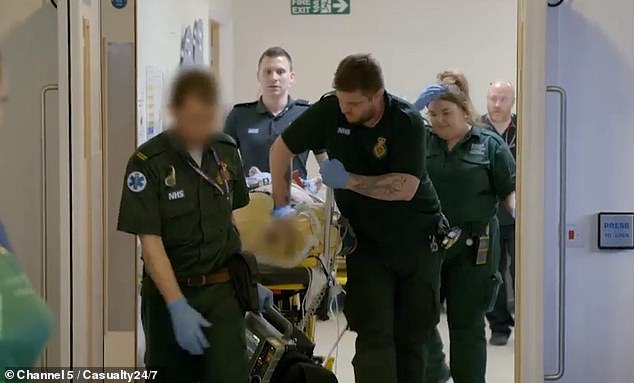 When the woman arrived at the hospital, paramedics were already performing CPR on her to keep her alive 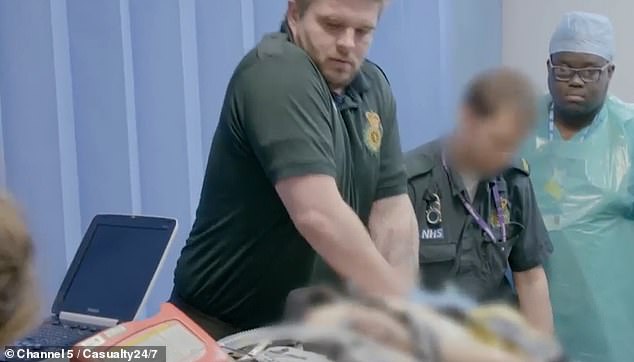 The paramedics explained they didn’t know how long she was down when they got to her, and that her heart stopped once more in the ambulance on their way to the hospital

Viewers praised the NHS workers, calling them heroes and noted how nice it was that George and Hannah stayed with the woman

They alternated between CPR and checking for her pulse multiple times under the supervision of Dr George Kay, who explained why time was ‘of the essence’.

‘There are eight reversible causes of a cardiac arrest,’ he explained. ‘If we get that treatment in there quickly enough we can reverse the process that’s happened and we can restart someone’s heart.

‘You can do all the rescue you can to try to get that heart restarted but you always have to think, what’s the underlying cause, because if you don’t treat that, you can’t get the heart restarted again – or of you do, it won’t stay beating for long.’

After 30 minutes had passed, the woman was then hooked up to a life support machine to help her breathe as the team of doctors investigated the cause of her arrest.

Things didn’t look good, as we heard Dr Kay explain that she’d been down for at least an hour, without counting the amount of time it took to the paramedics to get to her.

It soon appeared the team had exhausted their options, Yet, Dr Kay explained they wouldn’t take the decision to turn the life support off lightly. 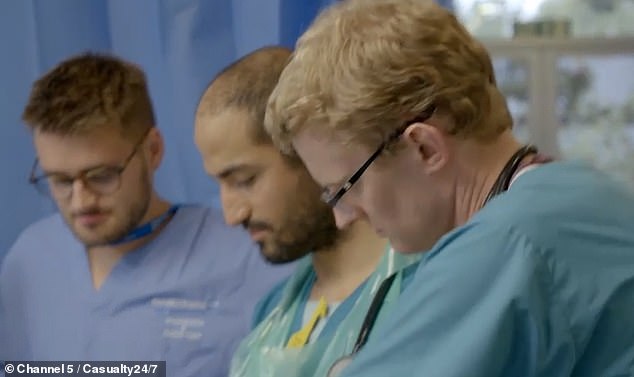 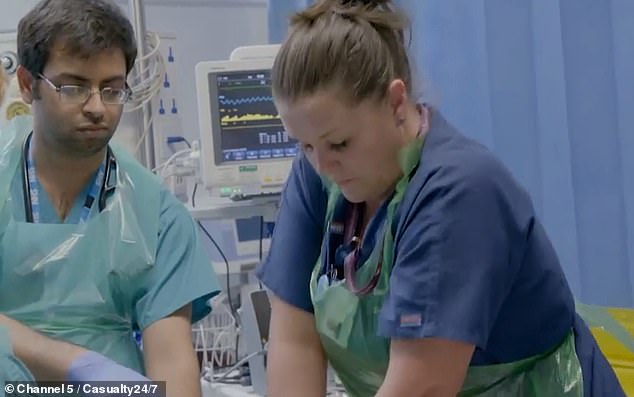 ‘When it comes to decisions about “When do you stop? Do you continue? Do you think of something else?”, actually this is the moment where every bit of the team has a role: You always ask if everyone’s happy with the plan,’ he said.

‘We don’t know how long she’s been down for, if she arrests again, I don’t think she’s going to win,’ he told Dr Chris Young, who’s come to assess the situation.

‘It’s always really hard when you worked your hardest for a patient, but it’s not just on your shoulders.

‘Everyone one the team, no matter how junior or senior they are, that’s when everyone’s opinion matters, it’s a team-led decision.’

‘Part of our job is making decisions,’ Dr Nick Mani added. ‘You have to do what’s right at that moment in time.’ 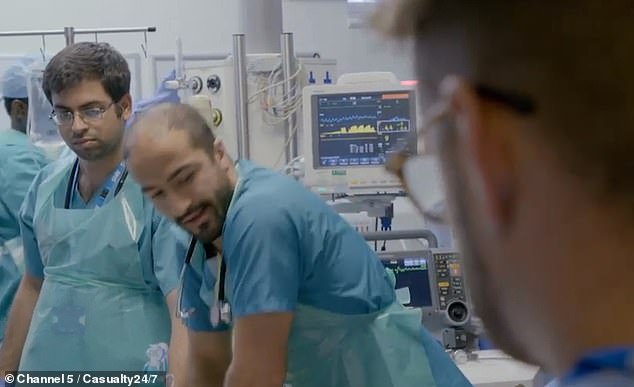 Doctor Mani did all he could to keep the woman alive, performing CPR repeatedly in resuscitation 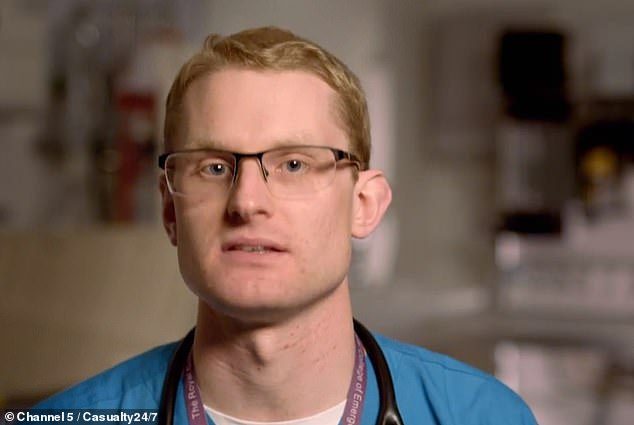 Dr George Kay explained he had learnt to know when to let go, and explained that doctors decide as a team whether they should turn the patient’s support off

When the team reached the conclusion the woman’s condition could not be reversed, Dr George Kay and Lead Nurse Hannah Ryan stayed behind with the woman until the end.

‘I think working in the emergency department, it makes you realise that life is potentially a lot more fragile than we think it is.’ Dr Kay said.

Nurse Ryan added: ‘As a nurse, we’re to give everything we can to our patients, and I think that’s all that was left for me to give to that lady.’ Dr Mani explained that being a doctor is about making tough calls, as the team prepared to make their decision about the woman’s fate 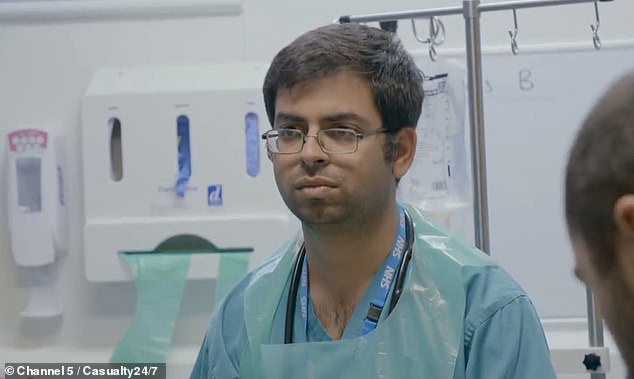 ‘I wanted to be there as she passed away, which is why I personally stayed with her,’ she added.

‘I put my uniform on and I’m Hannah the nurse, I’m not mum, or wife, or daughter – and it’s when you take the uniform off again at night, that’s when you get to think of what you’ve gone throughout that day.’ 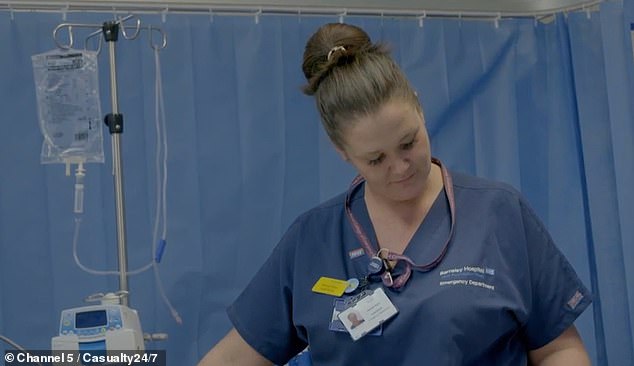 Nurse Ryan stayed by the woman’s side in her last moments, as she said it’s all that she could do for her 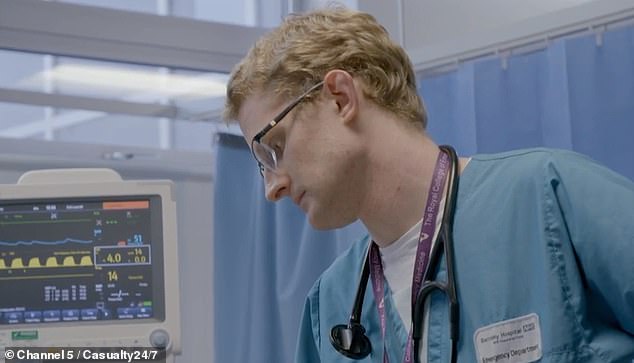 Dr Kay also stayed behind for the difficult moment, but explained he will have to get past it in order to tend to other patients 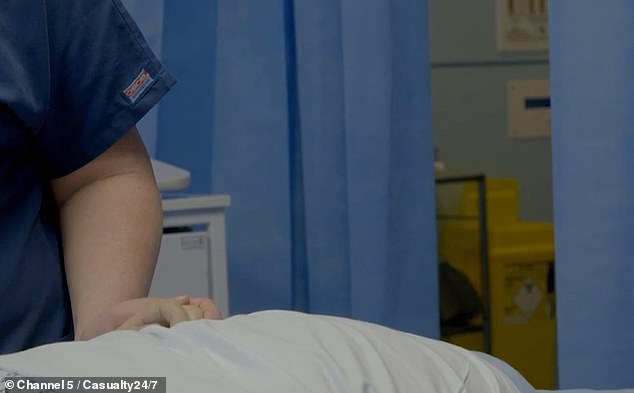 Nurse Ryan gently held the woman’s hand. After trying to help her for more than 30 minutes without response, the team made the decision to let her go

‘You have to separate yourself from the job that you’re doing, and from the decision you’re having to make,’ Dr Kay said.

‘Otherwise, if that’s all affecting you, you can’t do your job properly. But I guess it must affect us all in some way.

‘But ultimately, you go out and you pick up the next card and see the next patient.’