Meat the Family viewers were left horrified after a pair of pork-loving parents and their two young sons decided to send their two adopted pet piglets to the slaughterhouse after caring for them for three weeks.

The Channel 4 documentary series saw John and Dawn, from the north of England, adopt the duo in a bid to learn about the harsh reality of an animal’s journey from field to plate.

Throughout the show the couple and their sons, Sam and Maxwell, fall in love with the pigs, named Pauline and Eileen, with Max revealing he saw them as ‘two baby sisters’.

However, at the end of last night’s documentary the family made the shocking decision to send them to the abattoir because they couldn’t imagine a life without eating meat.

Pauline and Eileen were then returned to the family as sausages. Viewers were seriously unimpressed with the decision, with several insisting the family, who appeared upset by their decision, were crying ‘crocodile tears’. 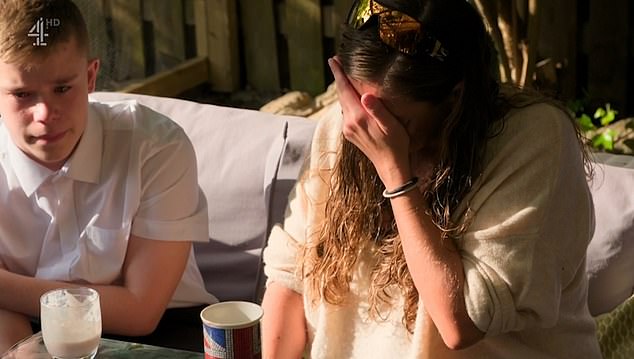 John and Dawn (pictured crying), from the north of England, and their sons Sam and Maxwell, adopted two adorable piglets for three weeks on Channel 4’s Meat the Family 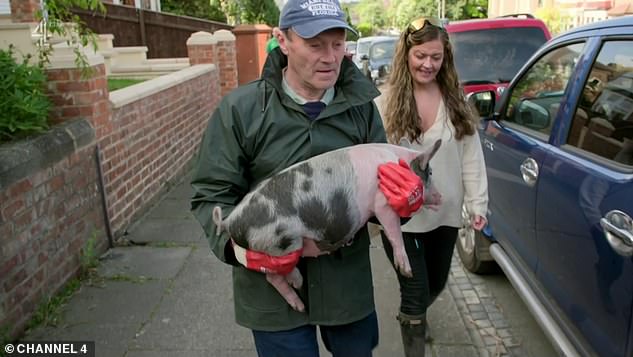 ‘How on earth could they let them pigs go to the slaughter after all that bonding!?’, wrote one,’ while a second raged:

‘Why would you not even try? You can’t care that much. Stop the crocodile tears!’

A third commented: ‘The family are crying over sending them to slaughter when they literally could have saved them… it’s your own fault really.’

The episode began with the family appearing to be swayed against eating meat, with John and Dawn jetting off to Madeira, Spain – the second largest pork producing region in Europe. 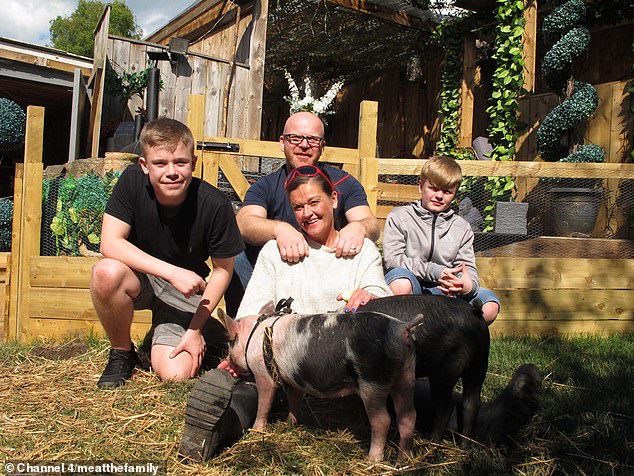 John and Dawn, and their sons Sam and Maxwell, were keen to learn about the harsh reality of an animal’s journey from field to plate (pictured left to right: Sam, John, Dawn and Max)

Viewers were seriously unimpressed with the decision, with several insisting the family, who appeared upset, were crying ‘crocodile tears’

The pair admitted that since having the pigs they had ‘gone off’ the taste of pork, confessing it ‘wasn’t that grand’ – with John even admitting he was starting to feel ‘like a proper veggie’.

‘Weeks ago I would have liked buzzed off it, but I don’t know what’s happened to me,’ he confessed.

‘Maybe there’s a little switch that’s gone off in our heads because when you taste it it’s not that grand. Even when we’re eating the purest form and it’s not as harmful, it hasn’t got the bad s*** in. It’s just the taste of the meat now.

‘I feel like a proper veggie, even though I love my meat and all that, maybe I’m starting to turn.’

Later the entire family were shown a video of how pork is mass produced – with mother-of-two Dawn insisting that although ‘ignorance is bliss’, she wanted to know what she’s feeding her family.

While watching the video, Dawn exclaimed: ‘S*** the bed. How many pigs are there?That’s rotten.

‘Ignorance is bliss isn’t it, you almost don’t want to know, but you do want to know because I’m putting it on your plate.’ 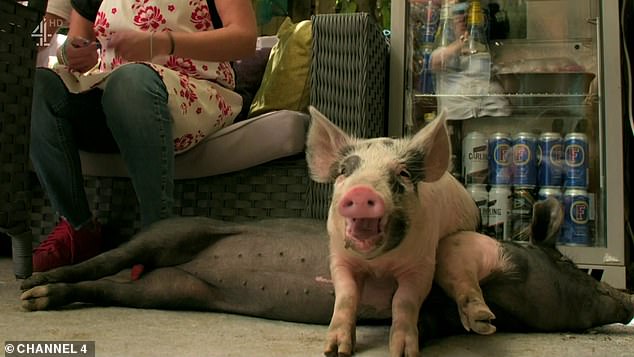 The family made the decision to slaughter Pauline and Eileen (pictured), who were returned to them as pigs 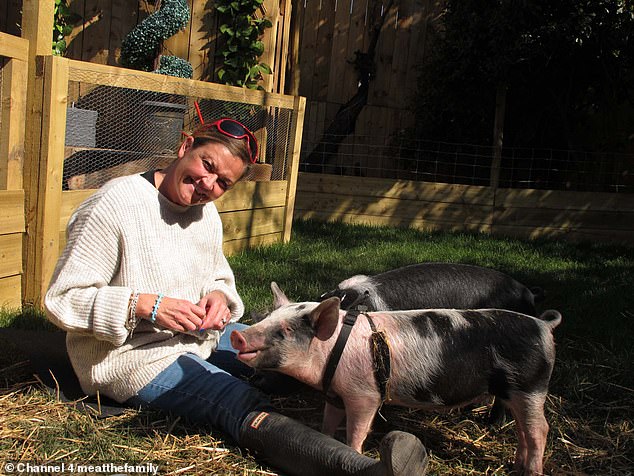 Dawn quickly fell in love with the pigs, and decided shortly after they arrived she wouldn’t eat pork again 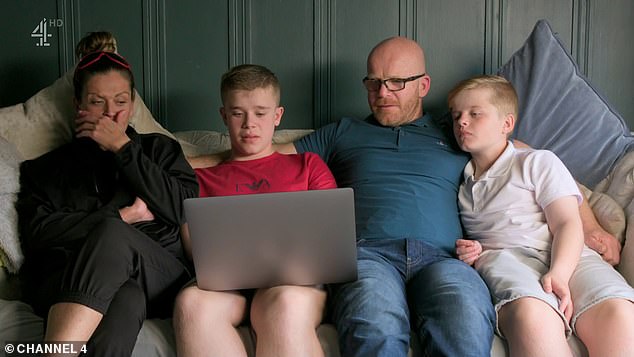 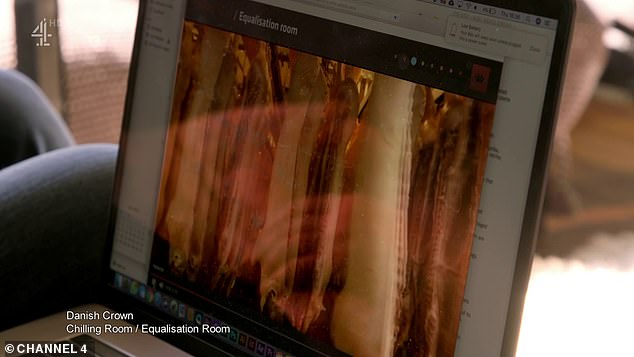 The shocked mother-of-two admitted that although ‘ignorance is bliss’, she wanted to know what she was feeding her family

John added: ‘The demand is that big, this is the scale they have to do it on. People don’t realise the process. Thousands and thousands are getting slaughtered every day just to keep up with the consumer demand.’

However, after being ‘disappointed’ by an entirely vegetarian BBQ, the family became hesitant about committing to a life without meat.

‘It hasn’t gone down very well’, said Dawn. ‘I’ve never had so much waste. I feel a bit disappointed because our family has not had a good feed.’

John added: ‘I didn’t feel as manly. I didn’t feel like a man cooking a BBQ with all the men around the BBQ and the smell of burning meat.’

The family then began toying with the idea of only eating meat that has been humanely processed, with John insisting: ‘We’ve given them a good life. They’ve had a good one. They’ve had it better than most.’

When it finally came to making the decision of giving up meat and sending the pigs to a sanctuary or going back to their old ways and sacrificing them, the thought of converting entirely to a vegetarian lifestyle was too intimidating for the family. 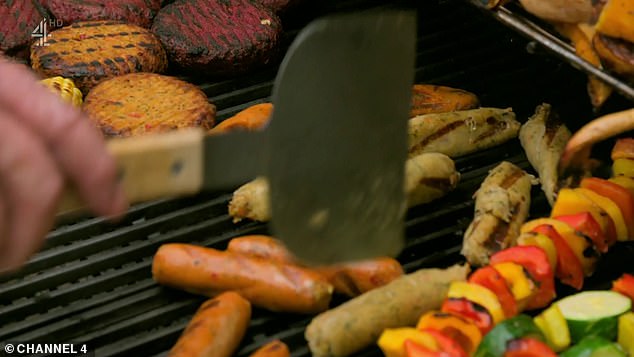 However, after being ‘disappointed’ by an entirely vegetarian BBQ, the family became hesitant about committing to a life without meat 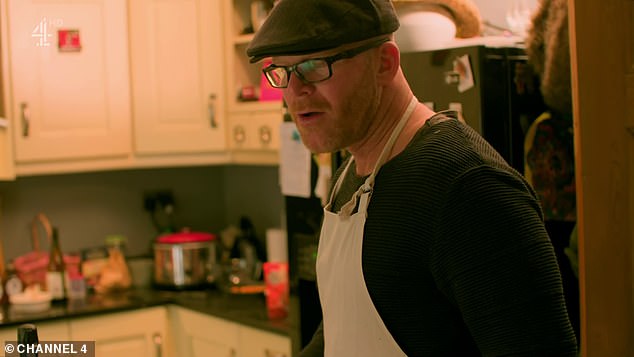 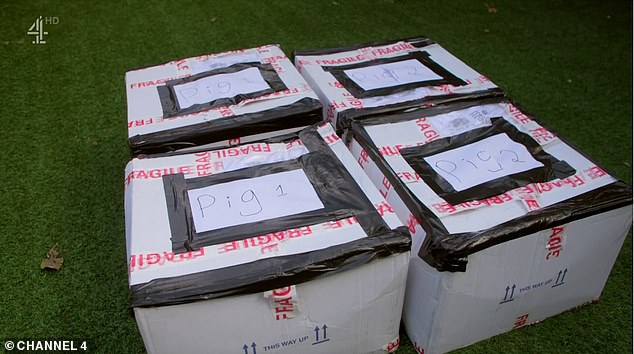 Pauline and Eileen were then returned to the family as sausages, which John and Dawn tasted (pictured)

Viewers continued to rage, with one insisting they were ‘gobsmacked’ that the parents even tasted the pigs

Dawn and John also agreed, but did commit to eating less meat. But sadly, that meant the pigs still had to go to the slaughterhouse.

Viewers continued to rage: ‘Don’t sit there bawling because your going miss the animals then send them to die. You made the choice, live with it, you don’t deserve to be upset.’

Another commented: ‘I’m getting so frustrated at this programme. If you’re that upset about sending the pigs to slaughter, why not just try going vegetarian? It’s really not that difficult.’

A third ranted: ‘Crocodile tears!!! If you really cared for them, you would have saved them and sent them to a sanctuary. It annoys me so much, how they can see this, and still be OK to eat them?’

When the crew returned to visit the family – and to deliver Pauline and Eileen as sausages – they admitted their meat consumption had massively decreased.

‘Our BBQs have changed, we’ve been having more fish on the BBQ, more corn on the cob, more chicken, I would say we are more pescatarians now.’

Is eating meat bad for you?

Meat is a good source of protein, vitamins and minerals in your diet.

However, if you currently eat more than 90g (cooked weight) of red and processed meat a day, the Department of Health advises that you cut down to 70g, which is the average daily consumption in the UK.

Eating a lot of red and processed meat probably increases your risk of bowel (colorectal) cancer.

Processed meat refers to meat that has been preserved by smoking, curing, salting or adding preservatives. This includes sausages, bacon, ham, salami and pâtés.

When buying meat, go for the leanest option.

These tips can help you buy healthier options: