Melania Trump was all smiles despite the gloomy weather on Monday when leaving for her trip to London to meet again with Queen Elizabeth II at a reception.

The 49-year-old first lady departed the White House on Monday morning in the midst of a rain storm with President Donald Trump, as the couple heads for London to attend the North Atlantic Treaty Organization (NATO) summit.

Although it was raining, Melania was all smiles when acknowledging cameras while holding a black umbrella to protect her curled brunette locks from getting wet before boarding Marine One – after her husband seemingly forgot about her as he made his way to the helicopter. 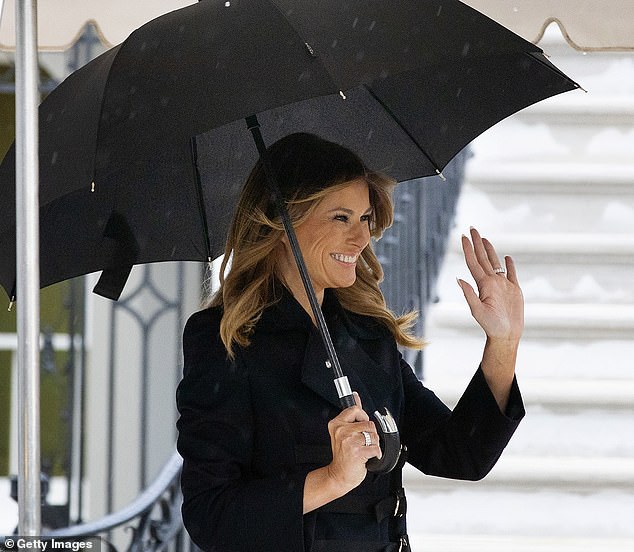 Grin and bear it: Melania, 49, was pictured leaving the White House on Monday morning and was all smiles despite the rainy weather 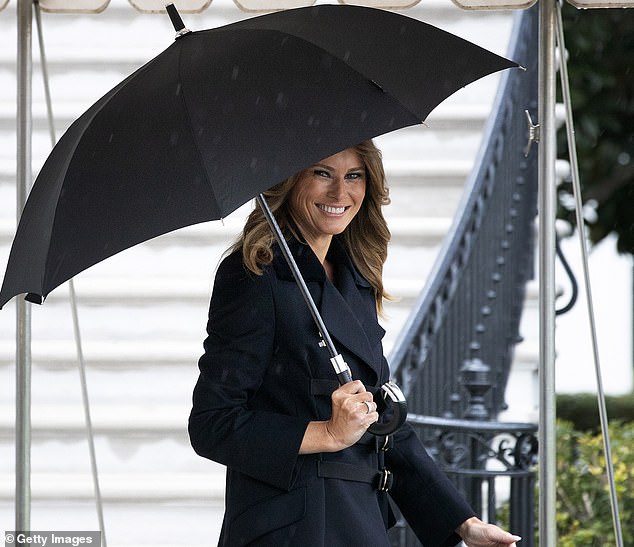 Happy Monday! She dressed in an all-black ensemble with a peacoat jacket, suede heeled boots, and an umbrella due to the rainy Washington, D.C. weather 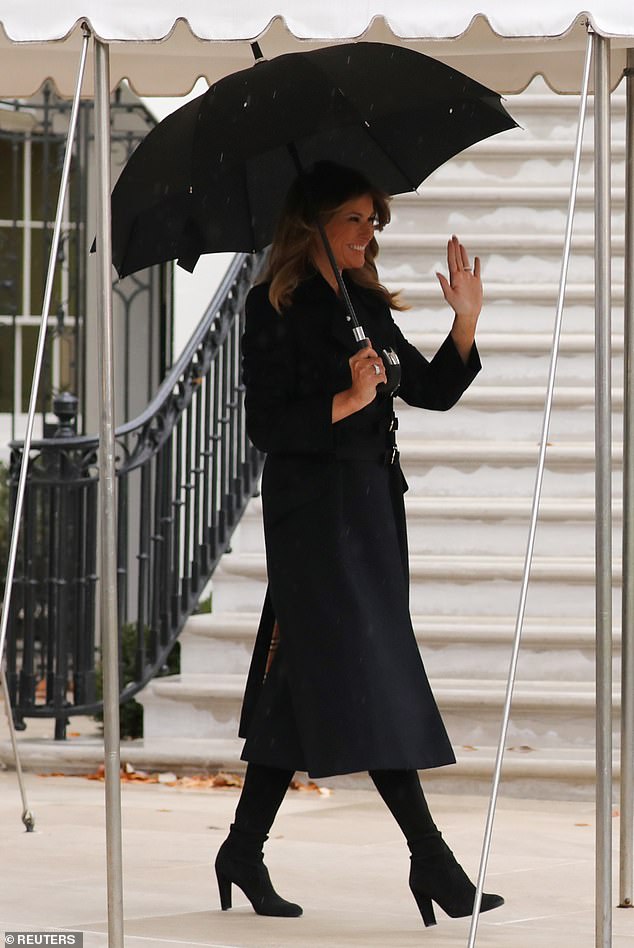 Fashionable: Melania and President Donald Trump are leaving for London to attend the NATO summit, which will happen on Tuesday and Wednesday 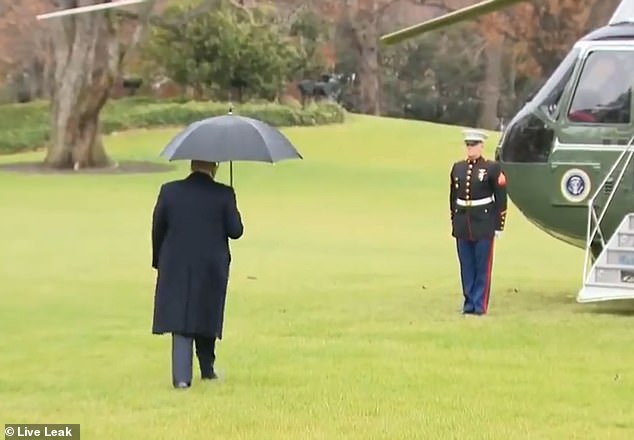 Forget something? Video from the couple’s departure shows the President walking off towards Marine One, apparently unaware that his wife was not with him 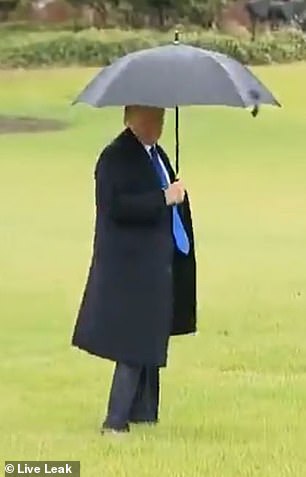 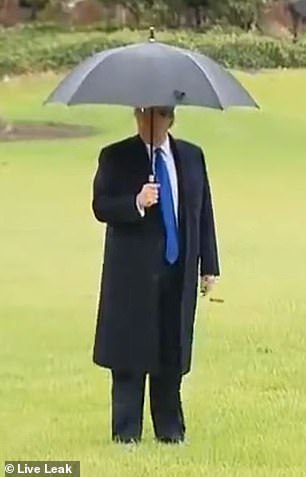 Playing catch up: Having almost reached the steps of the helicopter, Trump seemed to realize that Melania was not with him, and he turned around to wait for her

Video of their departure shows Trump walking quickly across the White House Lawn towards Marine One, while sheltering under an umbrella, before pausing just before reaching the steps of the aircraft to turn and look for his wife.

He then waits alongside the helicopter for Melania to catch up.

However, if she was at all put out by her husband’s behavior, the First Lady certainly didn’t show it, and she instead walked quickly across the wet grass to join the President, who then waited for her to board Marine One ahead of him.

Melania bundled up in a black peacoat when leaving, and she paired the jacket with black suede heeled boots.

The all-black ensemble exuded the perfect balance of stylish and cozy in preparation for the longer flight to London. And the first lady appeared in high spirits in anticipation of her work week taking place overseas for the next couple of days. 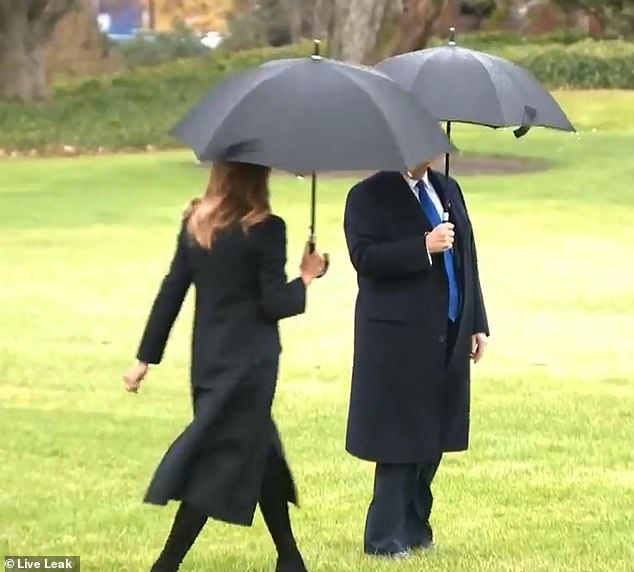 There she is: Melania soon caught up to her husband, after walking quickly across the wet White House Lawn 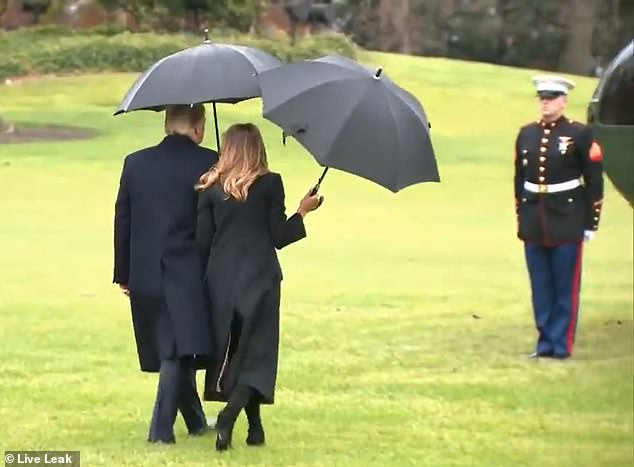 And they’re off: Trump then walked alongside his wife, before allowing her to board the aircraft before him 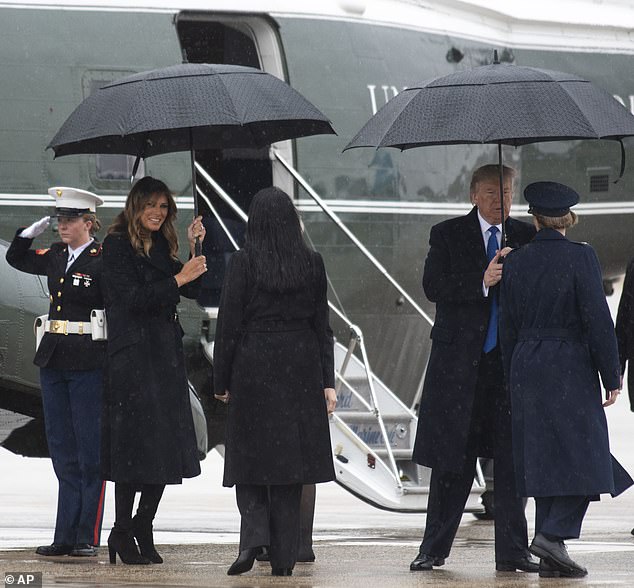 Ready to go: Queen Elizabeth II is set to host a dinner Tuesday evening at Buckingham Palace for everyone attending the NATO summit, including Melania and Trump 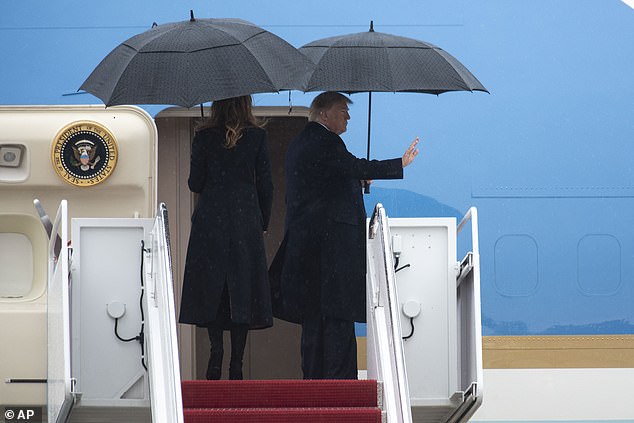 Explosive: An unauthorized biography about Melania’s life is set to release on Tuesday while she and Trump will be in London

Trump stayed with his signature look by departing the White House wearing a navy blue suit with a light blue tie underneath ahead of the flight.

Melania and the president will land in London late Monday evening just in time for the two-day summit starting on Tuesday, which will include time for Melania to meet again with Queen Elizabeth.

On Tuesday evening, Queen Elizabeth is set to host a dinner at Buckingham Palace for the NATO summit in honor of the alliance’s 70th anniversary. Included on the guest list will be world leaders, other NATO officials, and spouses.

It remains unclear what other meetings will be on the first lady’s agenda when attending the NATO summit with Trump.

The two-day summit comes as an unauthorized biography tiled ‘Free Melania’, written by CNN’s Kate Bennett, is set to release on Tuesday about the first lady and her life both during and before her time in the White House. 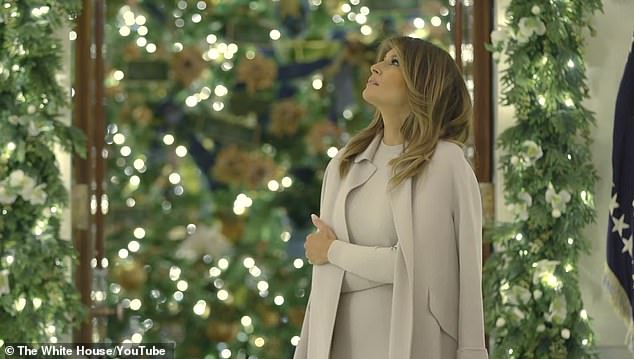 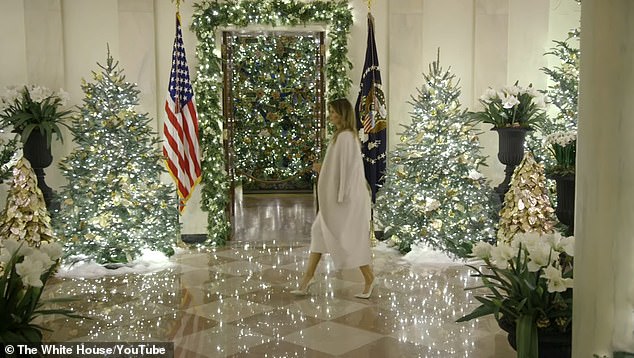 Display: In a nearly one-minute-long video posted to Twitter Melania enjoys the work of the volunteers, who helped to decorate the residence

Revelations include why the first lady wore that infamous ‘I really don’t care, do u’ jacket, new details on the severity of her May 2018 health crisis, behind-the-scene details of her White House life, and an examination of the first lady’s relationship with Ivanka Trump.

The 288-page book also claims Melania sleeps in a separate bedroom on a different floor from her husband in the White House.

And the first lady has her own suite of rooms in the White House on a separate floor from the president’s.

President Trump is on the second floor while Melania is on the third floor, in the two-room space formerly occupied by Michelle Obama’s mother, Marian Robinson.

The first lady also has a ‘glam room,’ where she does her hair and makeup, and a private gym with a Pilates machine, the book reveals. 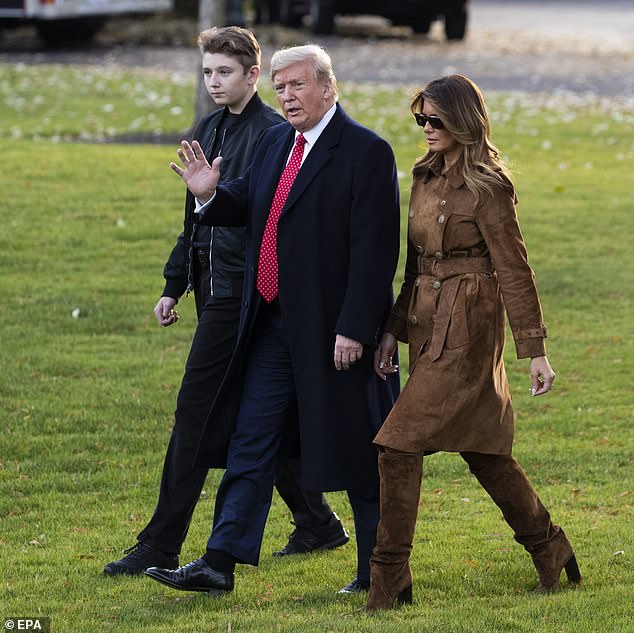 Her life: The biography titled ‘Free Melania’, written by CNN’s Kate Bennett, details Melania’s life including her commitment to her son, Barron 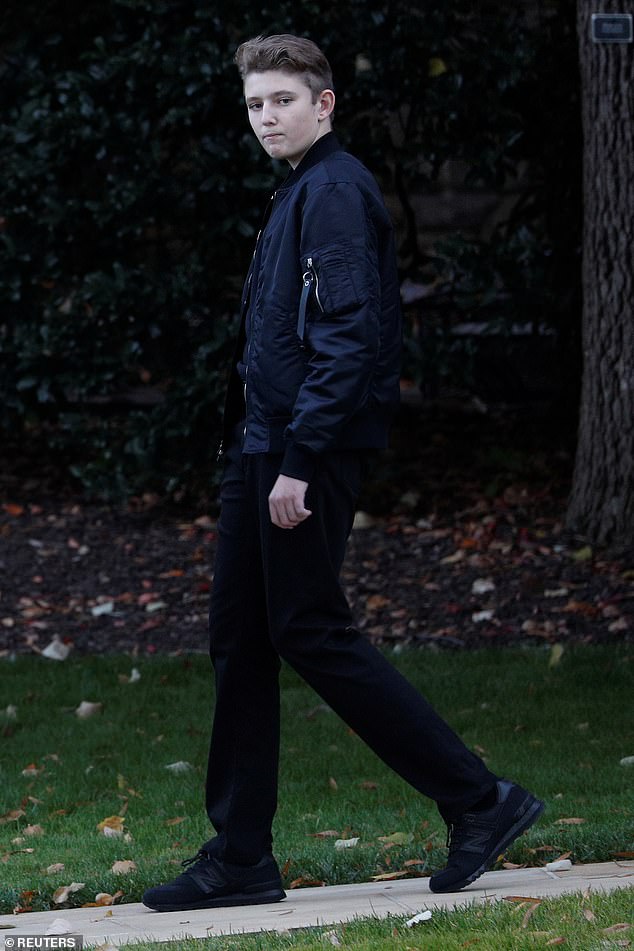 Her priority: Barron Trump, 13, remains out of the public eye for the most part. But was pictured leaving for Thanksgiving with his parents last Tuesday 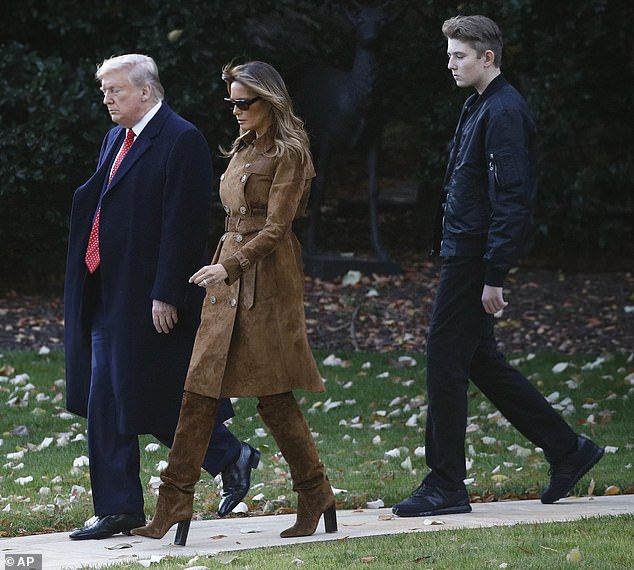 New details: The 288-page book also claims Melania sleeps in a separate bedroom on a different floor from her husband in the White House

Melania’s 13-year-old son, Barron Trump, also appears to be the main priority for the first lady when dictating her duties. In 2017, she delayed moving into the White House so Barron could finish out his school year in New York.

The child, who makes minimal public appearances with his family, was pictured leaving with his parents last Tuesday to spend Thanksgiving at Mar-a-Lago in Palm Beach, California.

The first son towered over both his parents while wearing a black T-shirt tucked into black pants, and he topped off the edgy look with a black bomber jacket and matching New Balance sneakers.

His wavy brown hair was cut shorter on the sides and looked to be styled with either hairspray or gel.

Barron appears to be even taller than the last time he was photographed, though his impressive height should come as no surprise. His father is 6 feet, 3 inches, while his mother is 5 feet, 11 inches.