A model who previously worked for Marc Jacobs and Rihanna‘s Fenty fashion line is facing a furious backlash for falsely claiming to be a transgender woman after coming under fire for posting transphobic comments on social media.

Carissa Pinkston, who is thought to be based in New York, first landed herself in the center of a sensational controversy when she was called out for posting transphobic remarks on her Facebook page, including statements that read: ‘Being transgender does not make you a woman.’

Then, in the wake of a horrified reaction from other social media users, Carissa —who was posting under the name Rissa Danielle — came out as transgender, in what has now been revealed as a shocking lie she made in an attempt to stop the criticism of her previous posts. 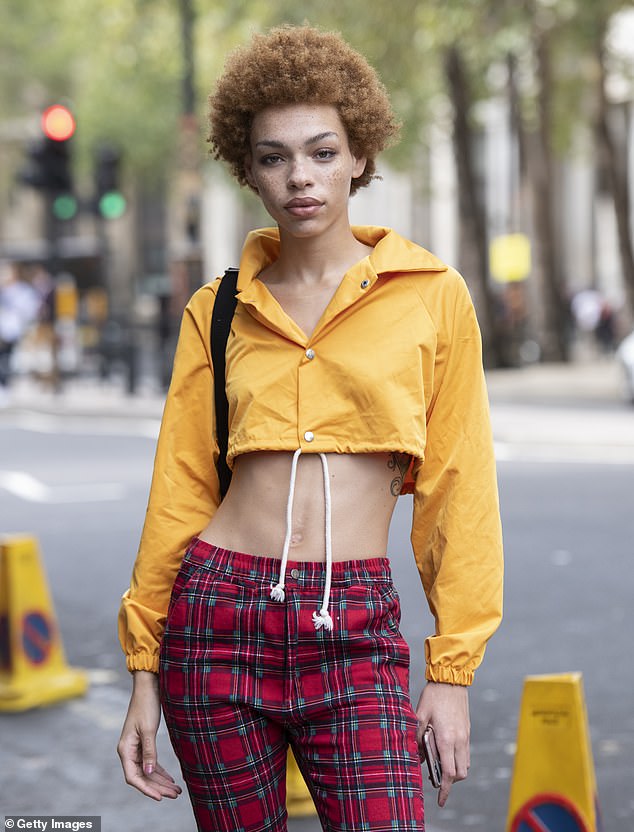 Controversial: Model Carissa Pinkston faced backlash in May for writing a series of transphobic posts, which prompted her to falsely come out as transgender

Backlash: Multiple posts shared by Carissa on Facebook showed her making remarks about being transgender

Feeling the heat: After the posts were revealed, Carissa was then dropped by Elite Model Management 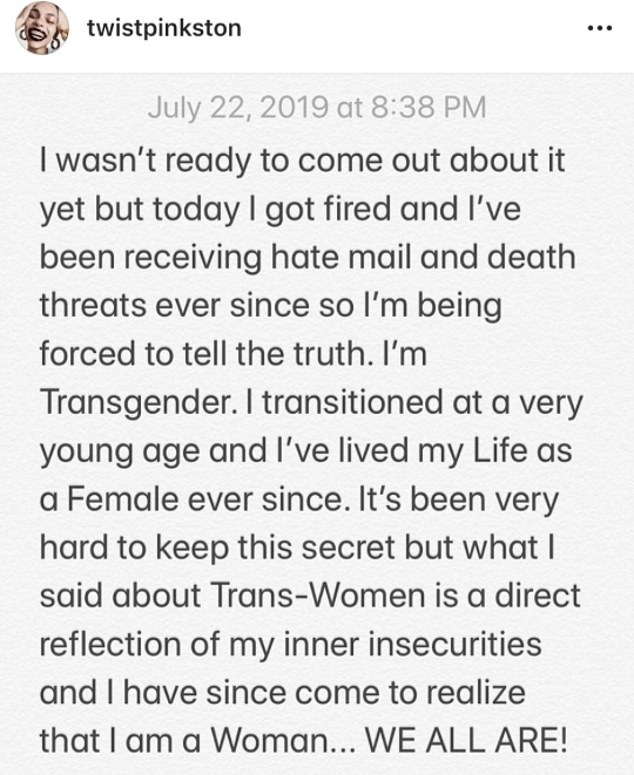 First apology: Carissa attempted to put out the fire by sharing a statement on Instagram where she came out as transgender. This statement has since been deleted

At the time of falsely coming out, Carissa wrote: ‘I wasn’t ready to come out about it yet, but today I got fired and I’ve been receiving hate mail and death threats ever since, so I’m being forced to tell the truth. I’m Transgender.’

Carissa referenced how her agency, Elite Model Management, dropped her over the transphobic Facebook posts after they were revealed to the public.

This inspired her to come out falsely as transgender in a statement on Instagram.

‘I transitioned at a very young age and I’ve lived my Life as a Female ever since,’ she claimed at the time. ‘It’s been very hard to keep this secret but what I said about Trans-Women is a direct reflection of my inner insecurities and I have since come to realize that I am a Woman…WE ALL ARE!’

This statement has since been deleted.

But the backlash only continued for Carissa as multiple models in the industry revealed she was lying about her gender identity and had always been a female.

Aleece Wilson, a model who previously worked with Carissa for Nike, was one person who specifically called Carissa out for lying to her followers.

‘I’ve seen baby pictures of [Carissa], I’ve seen her fully naked, I’ve been around this women long enough to fully know her,’ Aleece wrote in a comment. ‘We have many trans friends this conversation would have definitely been brought up.’ 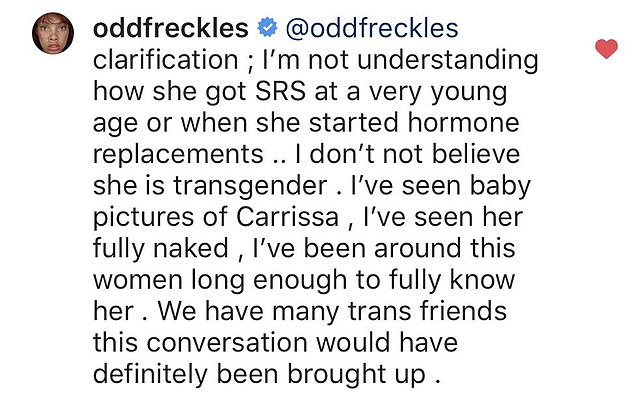 Speaking out: Aleece Wilson, a model who previously worked with Carissa for Nike, was one person who specifically called Carissa out for lying to her followers

Calling her out: The model informed people that Carissa was lying about her gender identity 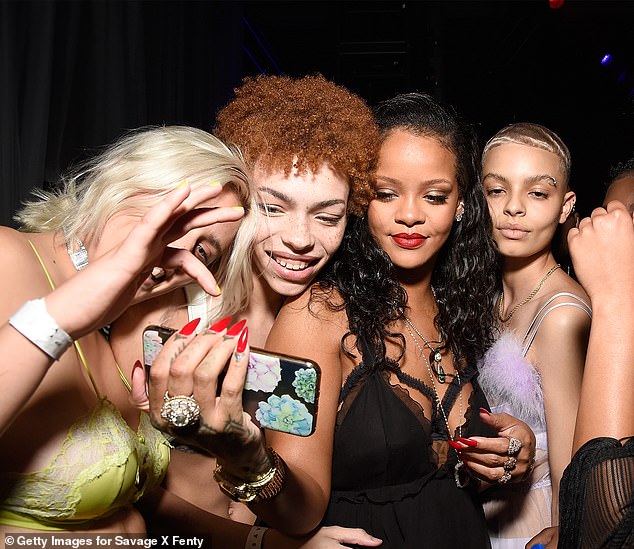 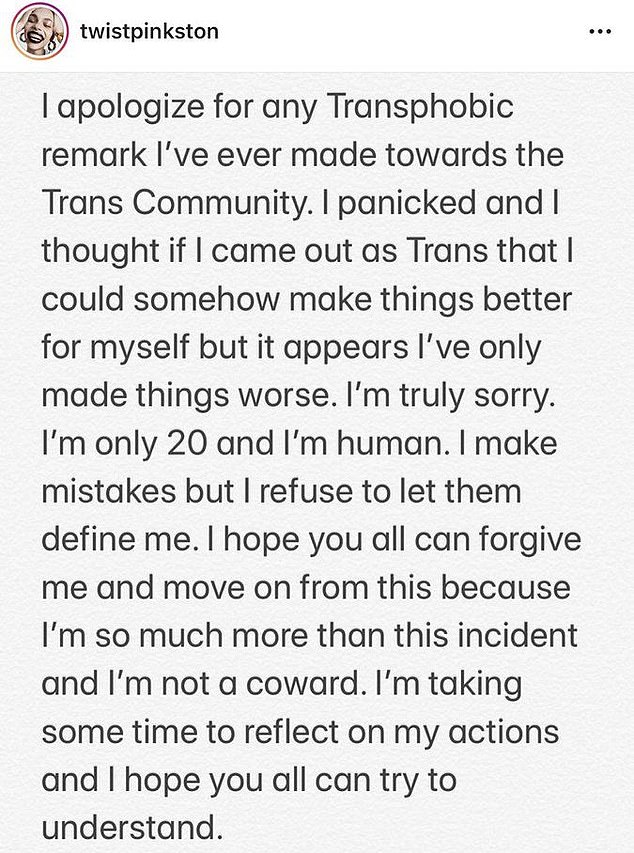 New statement: After receiving accusations of lying about her gender identity, Carissa posted another statement revealing she was not transgender

She further pushed her statements by saying she was ‘pro trans’ but would not allow Carrissa to lie to people.

A few days following the now-deleted coming out statement, Carissa apologized for claiming to be transgender.

‘I apologize for any transphobic remark I’ve ever made towards the Trans community,’ she wrote, adding: ‘I panicked and I thought if I came out as Trans that I could somehow make things better for myself but it appears I’ve only made things worse.

‘I’m truly sorry. I’m only 20 and I’m human. I make mistakes but I refuse to let them define me. I hope you all can forgive me and move on from this because I’m so much more than this incident and I’m not a coward.’

This apology has also been deleted from her Instagram.

Carissa later revealed to followers that her transphobic remarks on Facebook lost her a friendship with Euphoria actress Hunter Schafer, who is transgender.

The woman, Carissa said, stopped speaking to her following all the drama. 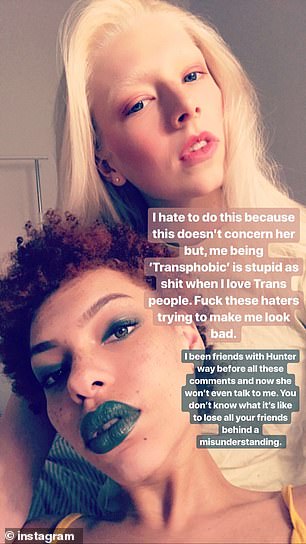 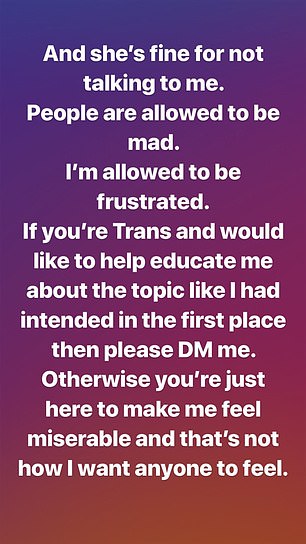 More backlash: She also revealed how actress Hunter Schafer, who is transgender, also stopped speaking to her following the incident 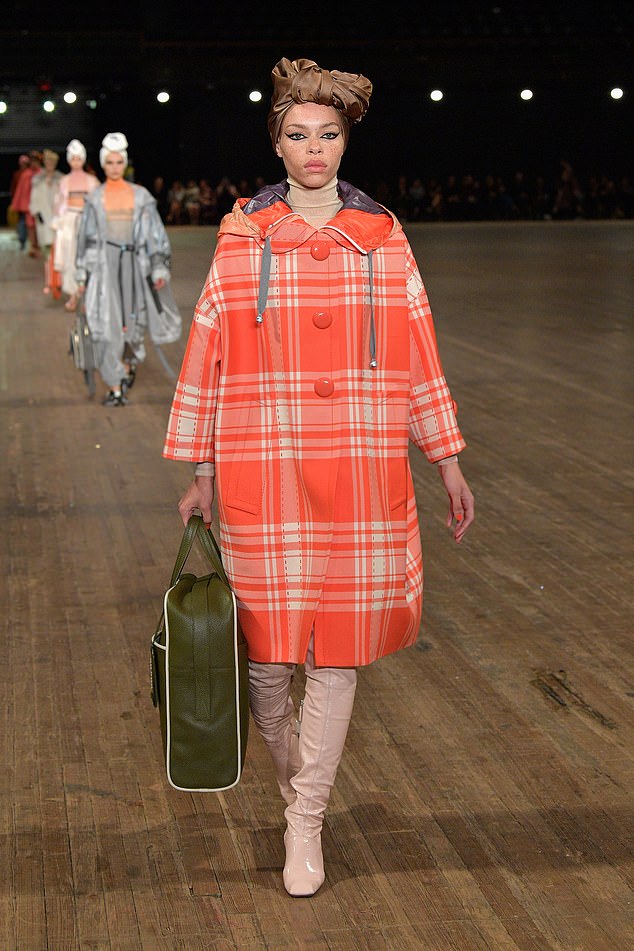 Trying to move on: All posts shared by Carissa, who is seen on the Marc Jacobs runway in 2017, about being transgender, including her final apology, have since been deleted

The end of the friendship was revealed by Carissa, who posted multiple pictures with Hunter on her Instagram.

‘I hate to do this because this doesn’t concern her but me being “Transphobic” is stupid as sh** when I love Trans people,’ Carissa wrote. ‘F**k these haters trying to make me look bad.’

She continued: ‘I been friends with Hunter before all these comments and now she won’t even talk to me. You don’t know what it is like to lose all your friends behind a misunderstanding.’

People on social media were not impressed with Carissa’s constant postings attempting to defend herself and her comments. Specific commenters even accused her of using this controversy to gain ‘clout’.

All the posts from Carissa regarding being transgender, and then not transgender, have since been deleted and she continues to update her profile with modeling pictures.

Carissa had a booming modeling career prior to the controversial posts, as she appeared in high-fashion editorials with Marc Jacobs, Edie Parker and Parabal Gurung. She even walked in the runway shows for Marc Jacobs.

It remains unclear if Carissa can overcome the recent controversy and continue to land prominent modeling jobs.