A mother-of-two has alleged that she was fired from her job because she couldn’t keep her young children quiet while working from home amid the coronavirus pandemic.

Dris Wallace, a mommy blogger and account executive from San Diego, California, started working from home in mid-March due to the global crisis while taking care of her daughter Dani, four, and son Dylan, one.

‘The first week of working from home started off very stressful with multiple calls, emails and unrealistic expectations,’ she wrote in an essay published by ScaryMommy.com. 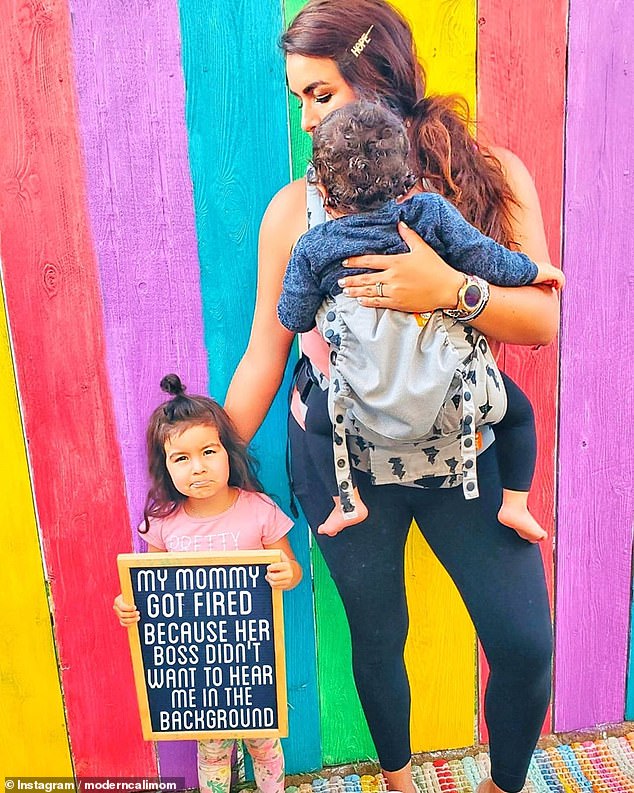 Unfair: Dris Wallace alleges she was fired from her job as an account executive because she couldn’t keep her children quiet while working from home amid the coronavirus pandemic 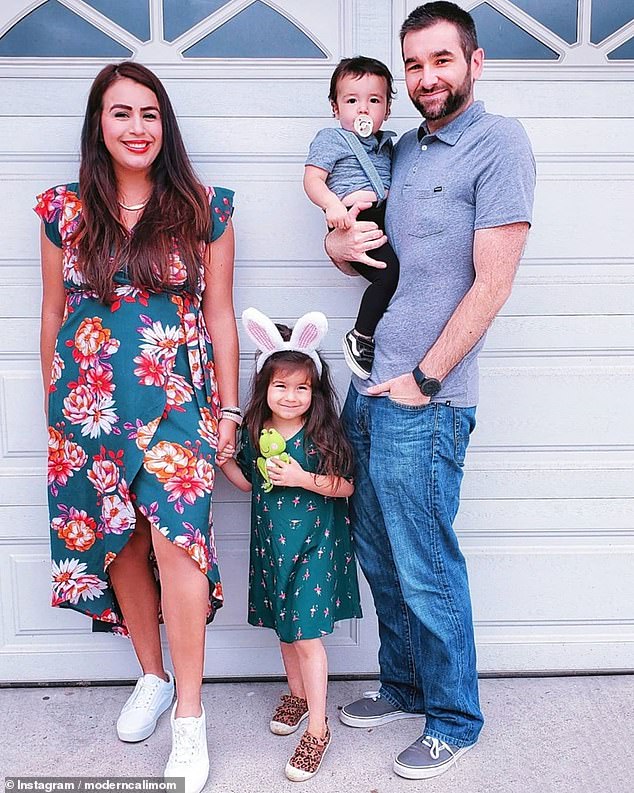 Family of four: The mommy blogger started working from home in mid-March due to the global crisis while taking care of her daughter Dani, four, and son Dylan, one

Dris, who is known as Modern Cali Mom online, explained that her role was to help her boss with their existing clients and obtain new clients, which required her to take a number of business calls during the day.

‘The pressure from my boss was creating so much stress. The kids were always interrupting, and the baby wanted to nurse all the time,’ she recalled. ‘They constantly had to wait for me to finish getting something done so I could tend to their needs. My heart broke.’

The mom said she ‘worked tirelessly’ to meet her deadlines, but her boss was frustrated that he could hear her children during their calls.

Dris explained that it became an ongoing issue, and in an effort to appease her boss, she pushed her son’s nap-time into the early afternoon.

‘I set the expectation with my boss that I would put him down for a nap and that I could be on client calls from 1 p.m. to 4 p.m. with minimal background noise, hoping my baby wouldn’t wake up in the middle of our calls,’ she said. ‘That was my only solution. The stress and anxiety that my boss created for me was through the roof.’

However, she said her boss ignored her schedule and arranged calls at lunchtime — when both of her kids were ‘hungry and impatient.’

Dris insisted that she was still able to meet her deadlines and perform well, noting she never once received any complaints from her clients about her children. 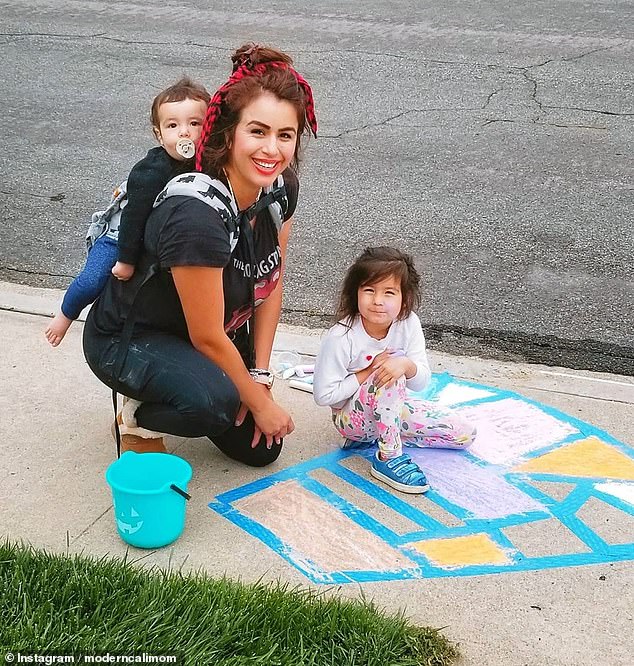 Stress: Dris said her her boss was constantly frustrated he could hear her children in the background during their business calls 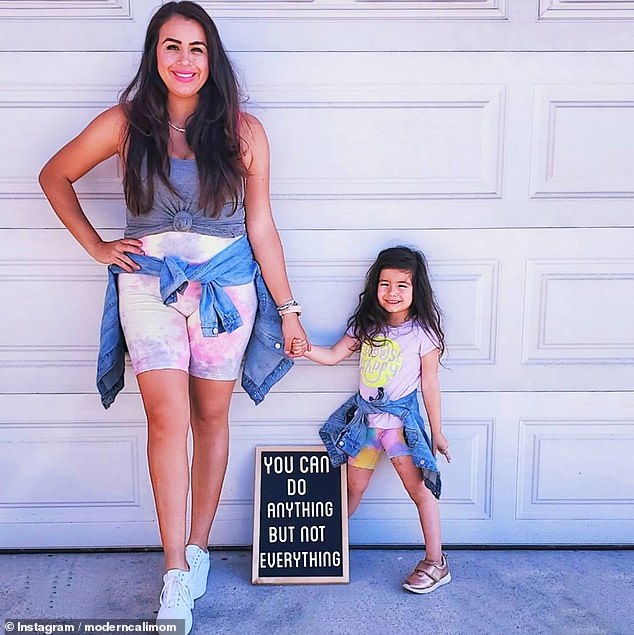 Doing her best: Dris insisted that she was still able to meet her deadlines and perform well, noting she never once received any complaints from her clients

After more than two months of working from home, she said his frustration with the distractions started to escalate in May, and he told her she needed to ‘take care of [her] kid situation.’

When she asked what he meant, explaining she can’t just lock her kids in a room, he told her to ‘figure it out.’

Dris said she felt ‘demeaned and degraded’ by his flippant response.

‘Would I win employee of the month in his book if I left my one-year-old in a room alone, crying, so that he could get his way?’ she asked. ‘It’s disgusting.’

She was eventually assigned to do time management training and was once again told they were ‘tired’ of accommodating her.

Frustrated with the discrimination she was facing, Dris said she turned to the human resources department for help in late May. After feeling she was dismissed and rushed off of the phone, she sent a follow-up email outlining the issue.

When HR set up a call with her on June 2, she assumed it would be to help her find a solution, but instead, she said she was told they ‘should part ways.’

She claims that when she asked them what she did wrong, they backtracked and said ‘they were experiencing a reduced revenue due to COVID-19.’ 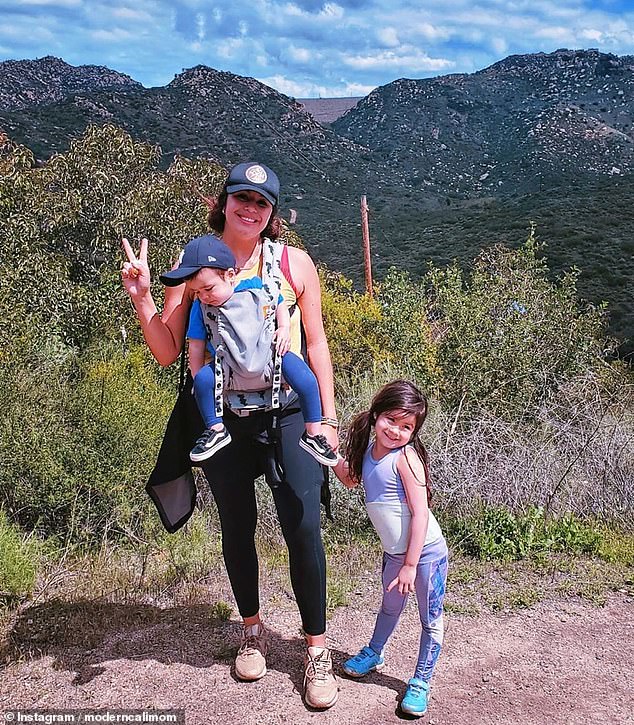 Hard to handle: After months of feeling discriminated against as a working mom, she said she turned to human resources for help only to get fired a week later 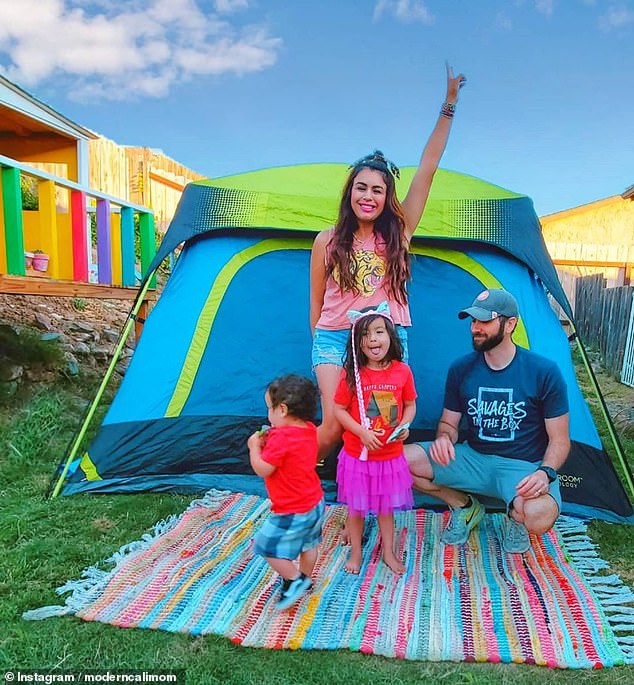 Using her platform: Dris explained that she’s sharing her story because she hopes it will raise awareness of ‘gender discrimination and bias against mothers’

‘It was a clear, inconsistent excuse to cover up their illegal motivations,’ she said. ‘It’s also just not true because they continued to hire new positions after my termination, and the company leadership had committed to no layoffs during the pandemic.’

Dris said she feels ‘betrayed’ after working tirelessly for the company while taking care of her children at home.

She explained that she’s sharing her story because she hopes it will raise awareness of ‘gender discrimination and bias against mothers.’

The influencer, who has more than 61,000 Instagram followers, also shared a candid post about her firing last week along with a picture of herself with her daughter and son.

In the snapshot, her daughter is holding a letter board sign that reads: ‘My mommy got fired because her boss didn’t want to hear me in the background.’

‘They can keep the hush money they offered to not bring this up! No working mother should be discriminated against, especially during these times, for not being able to keep my one-year-old quiet for a business call. For not being able to turn something around in five minutes when my baby wants a snack,’ she wrote.

‘I’m going to fight for every mom that has gone through this! It’s not okay!!! IT’S not OKAY to have to feel that your boss is making you pick your work over your kids during these times!!!’