A mother-of-two has been left outraged after discovering her ex-partner is making a monthly donation to charity, while paying minimum maintenance for his own two children.

The unnamed UK-based parent revealed that her former partner, gives her just £25 a week, or £12.50 per head, for their two children, forcing her to rely on benefits to top up her income.

She vented her frustrations on Mumsnet’s Am I Being Unreasonable, explaining that because money doesn’t even cover her children’s lunches they need free school meals, and he tells her to use her benefits when she complains.

The majority of commentrs shared her anger, and questioned if he was hiding his true income to avoid paying more, while a handful defended him, saying that as long as he pays what’s legally required, he can do what he wants with the rest of his money. 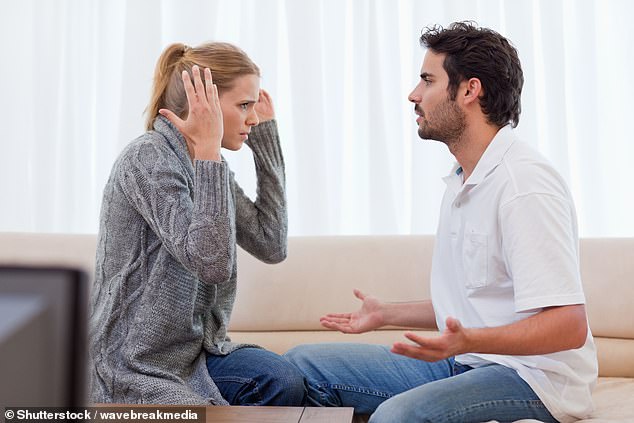 A UK-based mother said she was outraged by the fact her former partner was donating money to charity while only paying the minimum of £25 per week – £100 per month – for their own two children. Pictured: a stock picture of a couple arguing

‘I’ve just found out my ex, through his business as a sole trader, donates a monthly “financial contribution” to the local food bank that is run by a religious organisation, as well as making regular food donations too,’ the mother wrote.

‘I’m absolutely enraged. I receive £25 a week through CMS collect and pay service for a teenage daughter and 11-year-old son. This has been regular now for about two years.’

The mother-of-two explained she had not received any payment before then, and added her ex-partner added salt to the wound by slating her for having to survive on benefits such as child tax credit and child benefit to top up her income.

‘I get called a benefit bum quite a bit and when I try to explain that £25 doesn’t go very far in order to at least feed them. He tells me, “That’s what your benefits are for”,’ she said. 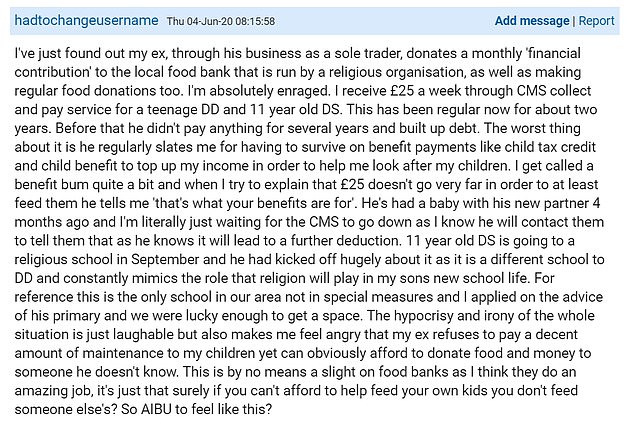 In a post on Mumsnet, the mother-of-two explained she had to rely on benefits to feed her children. She added her former partner judged her for that

She added she felt she would be paid even less money in a few months, because her ex-partner has had another baby with a new girlfriend.

‘I’m literally just waiting for the CMS to go down as I know he will contact them to tell them that, as he knows it will lead to a further deduction.’

In spite of her anger, the woman wanted to stress her frustration were only directed at her former partner, not the food bank he apparently supported.

Mumsnet members felt for the mother-of-two and shared her angry, stressing her former partner was only doing the minimum for his children.

‘He sounds like an idiot, OP! I would be fuming too,’ one said.

‘£12.50 a week per child doesn’t even cover their lunch money. Either your husband is really poor or he’s a lying b******. I presume you know which. I’m furious on your behalf.

Some people sided with the ex and said he’s paying what the CMS requires, and that his former partner should take action if she thinks he’s earning more than he’s declaring

‘What kind of a man pays the legal minimum whilst giving money away to random strangers. Have a think for a minute. £12.50 a week contribution for a child is a disgrace,’ another said.

‘I cannot believe there are posters who think, knowing he has a mortgage-free home, and is making regular tax deductible and very public charity contributions, who clearly has an accountant who knows what they are doing, and is paying £12.50 per child per week and doing absolutely none of the work of child rearing, and name calls the mother of his children, he is some sort of hard done by, great guy. RAISE YOUR STANDARD FOR FATHERS,’ another said.