Australians are obsessing over a mother’s heartwarming family tradition, which encourages people to reflect on the happiest moments of the past 12 months on New Year’s Eve.

Every January, she buys a large glass jar which her husband and children fill with positive notes and personal achievements once a week until the end of the year.

Sitting down as a family, they empty the container on December 31 and look back on fond memories of the year gone by.

The idea, which was posted anonymously in an Australian parenting group on Facebook, received widespread praise online, with many saying it has reminded them to ‘count small blessings’ and be grateful for what they have. 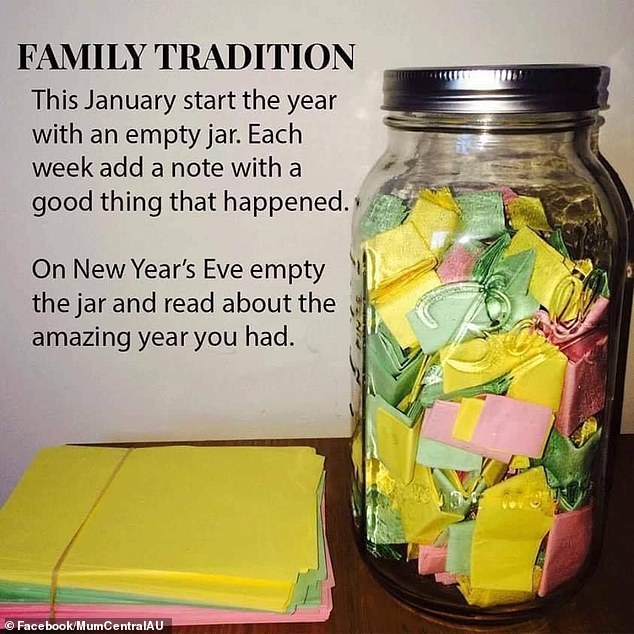 Australians are obsessing over this heartwarming family tradition (pictured), which encourages people to reflect on the happiest moments of the past 12 months on New Year’s Eve

‘I needed this. I’ve been thinking of my losses and not my blessings this year,’ said one woman.

‘Reading notes from our jar while having a glass of wine or two on New Year’s Eve is what we do,’ another said.

‘It’s really nice to look back and think, “it hasn’t really been a bad year after all”,’ she added.

One woman called the jar ‘an awesome idea’ and a great opportunity to take time out of busy modern life to document special moments.

Others suggested alternate uses for a ‘note jar’, like using one to keep track of key milestones for young children.

One mum said she plans to jot down every new word her son speaks in 2020.

Some felt it would make a romantic wedding anniversary gift, encouraging married couples to reflect on the high points of their relationship.

One woman fills her jar with spare change and opens it a few weeks early at the start of December to spend on Christmas presents.