An obese mother who used to drink five litres of coke a day revealed how she shed 7st after being told she was eating herself to an early grave.

Kelly McCracken, 42, from Hull, East Yorkshire, used to wear a size 28 and tipped the scales at 20st at her heaviest.

She was so big she had to be washed and dressed by her boyfriend, Steven Hall, 51, and felt so embarrassed she hated being seen by other parents when on the school run with seven-year-old son Curtis.

However Kelly turned her life around after she was hospitalised in March last year with complications resulting from diabetes and high blood pressure caused by her unhealthy lifestyle.

‘The doctor told me I would die and would not make it to Christmas if I didn’t do something about my weight,’ she said. 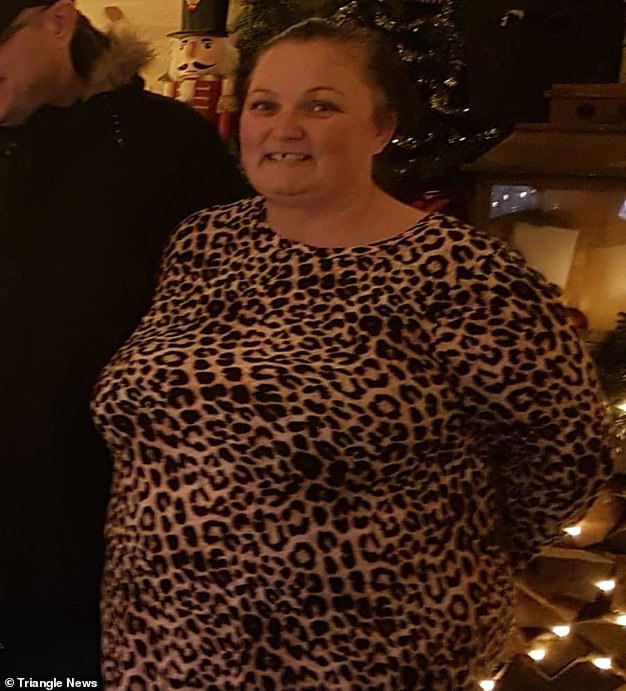 Kelly McCracken, 42, from Hull, East Yorkshire, used to wear a size 28 and tipped the scales at 20st at her heaviest. She lost 7st in just 10 months. Pictured, before her weight loss 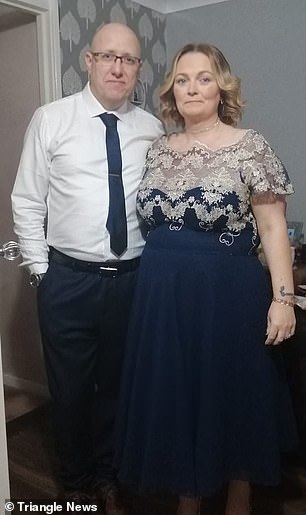 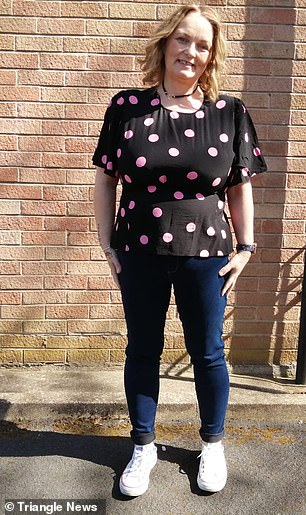 The mother-of-six piled on the pounds after the birth of her son Curtis, now seven, and would on fizzy drinks and pizza. Pictured, before (left) and after the weight loss (right)

‘I felt sick and was terrified I wouldn’t see my boy grow up. I vowed to diet and I haven’t touched coke or junk food since. It was the wake up call I needed.

‘I was lying in the hospital bed and I made Steven sign me up online to Weight Watchers and that was the day my life changed.’

Kelly, a mother-of-six, lost 7st in 10 months by overhauling her diet and recording what she ate in a food diary. She also introduced exercise into her daily routine.

She said: ‘I started going on little walks even though I couldn’t go far but every step made a difference. I was eating things like fruit and yogurt, sweetcorn soup and crackers and omelettes with salad and pitta bread. 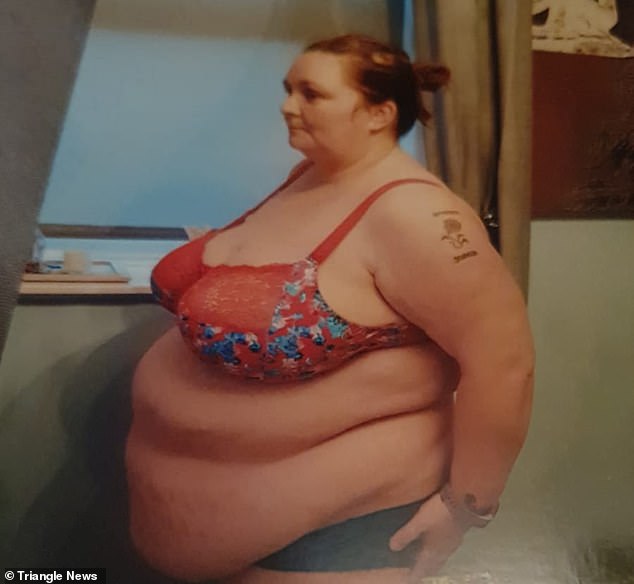 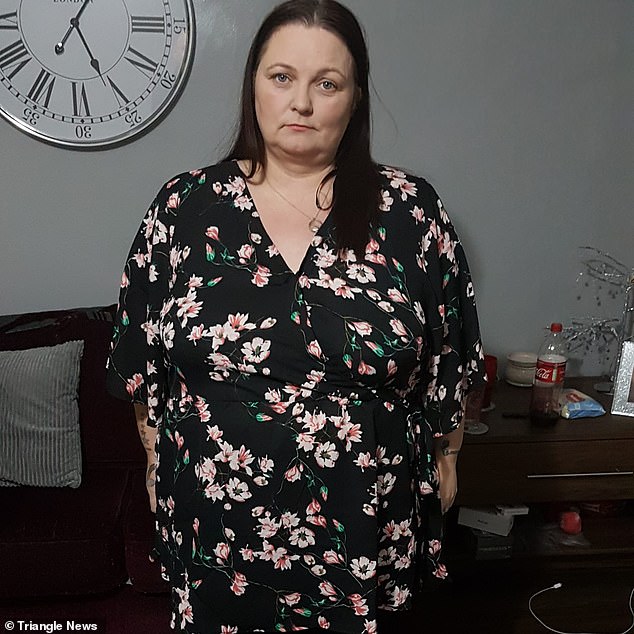 In March 2019, Kelly (pictured before) was admitted into hospital for diabetes and high blood pressure 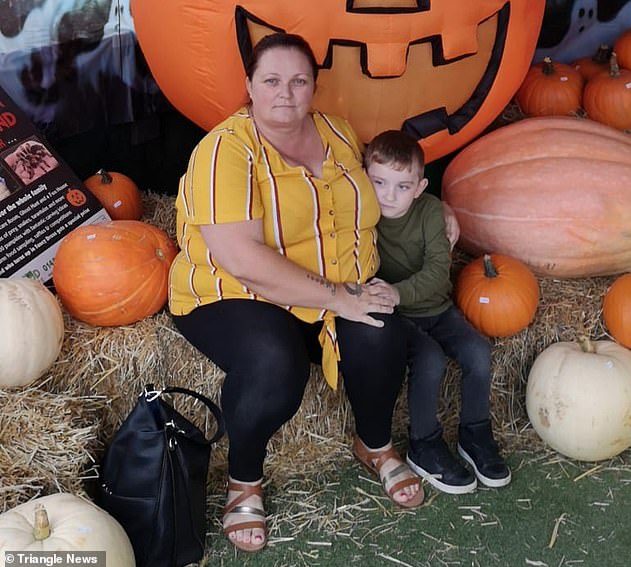 ‘And when I lost three stone, my partner bought me a little sausage dog called Frankfurter. Me and my little boy had wanted one for ages and all of a sudden I had a responsibility to walk him twice a day which I did. We love him so much.’

Kelly says she now only drinks water and will have a protein bar as a treat now and then – having ditched junk food entirely.

She says cutting out takeaways has been a huge challenge and admits there has been tears along the way.

‘But it has all been worth it,’ she said. ‘I can finally be a mum to my boy. He deserves having his mummy able to move around with him.’

Before losing the weight, Curtis would speak to his classmates and teachers about his mother’s weight.

Kelly is now a size 14, and weighs 13 stone. She adopted healthy eating habits and took up exercise in order to shed the weight. Pictured now 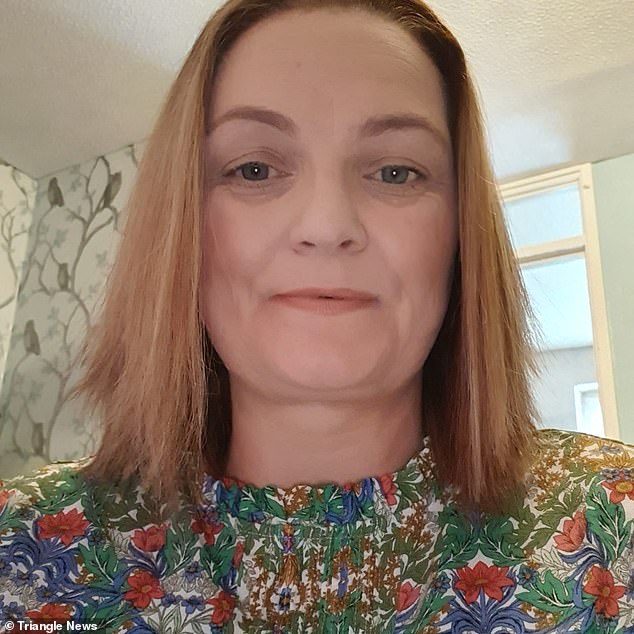 Pictured now. Kelly is now rocking a slimmer silhouette and is determined to keep her trimmer figure

Now more confident in her body, the mother-of-six said she could wear clothes she’d never pick before (pictured now)

Kelly said: ‘My little boy used to go to school and tell his teacher he was scared Mummy might not pick him up because she might die.

‘He knew his mummy was bigger than the other mummies. I found out at a parents evening and I just broke down.

‘The truth was I was obsessed with food and couldn’t stop. I even thought I was happy but I obviously wasn’t. We used to go out as a family to all you can eat restaurants and I would tell myself I have had enough now for the day but by the time I got home I would be eating crisps.’

Kelly said her partner of 22 years, Steven Hall, 51, had to become her carer, even though he has a full-time job as an accountant.

‘He would have to help me dress because I was so fat I couldn’t put on socks and he would need to help with my trousers,’ she continued. 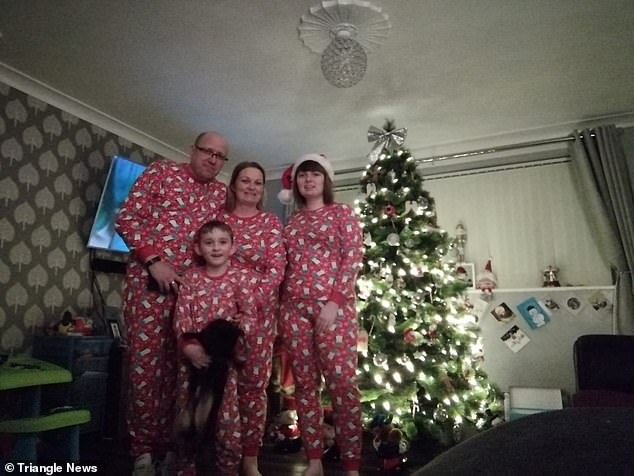 Kelly with Curtis, Steven and another of her children during the 2019 Christmas holidays, after she’d already lost some weight

‘But the biggest humiliation was him washing me because I couldn’t get in and out of the shower and was too big for the bath.’

But one Friday night in March last year Kelly went to bed early after telling Steven she felt ill. Her eyesight had been blurry all week and her whole body was shaking.

Kelly woke up in the early hours in a panic with chest pains before an ambulance was called. She was rushed to the Hull Royal Infirmary with Steve, 51 and her mum, Janet, 58.

The shock set Kelly on her path to losing weight and less than a year later, on 25 January, Kelly stepped on the scales having reached her target weight of 13st 7lbs.

She is now a size 14 She has now lost even more weight and aims to maintain her goal weight of 13 stone. 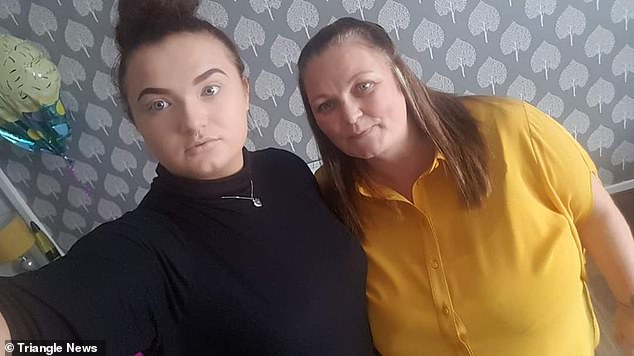 Kelly with her eldest daughter Bethany, before she lost the weight. The mother-of-six said she was proud of her children’s reaction to her new weight

‘Life is so different I feel like I have a new one,’ she said. ‘I can wear clothes that would never have fit before and I have become a gym bunny.

‘I go four times a week and do legs, the treadmill, exercise bikes, resistance band training and tyres and it is really helping.

‘I even go to the shops and buy clothes I want rather than ones I can find that fit. I don’t recognise myself when I look in the mirror and I feel independent again.

‘But the magical thing about this journey is my son now puts his arms around me for a hug and says “Look how thin you are mummy.” I was too big for him to fit his arms around me before. I’m now always on the school run and have no shame about the way I look.’