A 17 stone sugar addict who drank up to five bottles of Lucozade a day – leaving her suffering from extreme heart palpitations – has shed an incredible eight stone and cured her fizzy drink cravings.

Em J Carter, 25, from Wavertree, Liverpool, started to pile on the pounds in 2016 when she turned to fast food and fizzy drinks as a form of therapy whilst suffering from depression.

Barely fitting into a size 16, the actress would make three trips to the shop a day to buy bottles of Lucozade, hiding the evidence under her coat, and would order takeaways at 3am and wait for them outside her house so her parents didn’t hear.

Her unhealthy habits turned so bad in 2017, that when she visited her GP with severe dizzy spells, shortness of breath and extreme heart palpitations he offered to call her an ambulance.

Em decided to take a stand against her weight in 2018, teaching herself how to cook and eat healthily using YouTube videos – and swapping sugary snacks for carb free alternatives such as Coke Zero and carrots with hummus.

Her lifestyle transformation saw her shed a mammoth eight stone in 12 months to fit into a size six – and she now wants to help others battling an extreme food addiction. 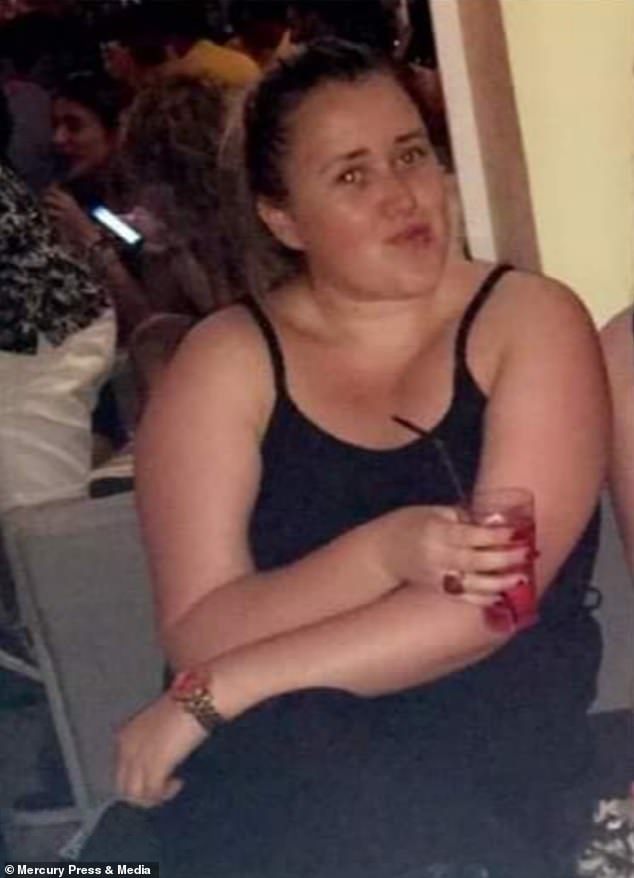 Em J Carter, 25, from Wavertree, Liverpool, started to pile on the pounds in 2016 when she turned to fast food and fizzy drinks as a form of therapy when suffering from depression. (pictured before the weight loss) 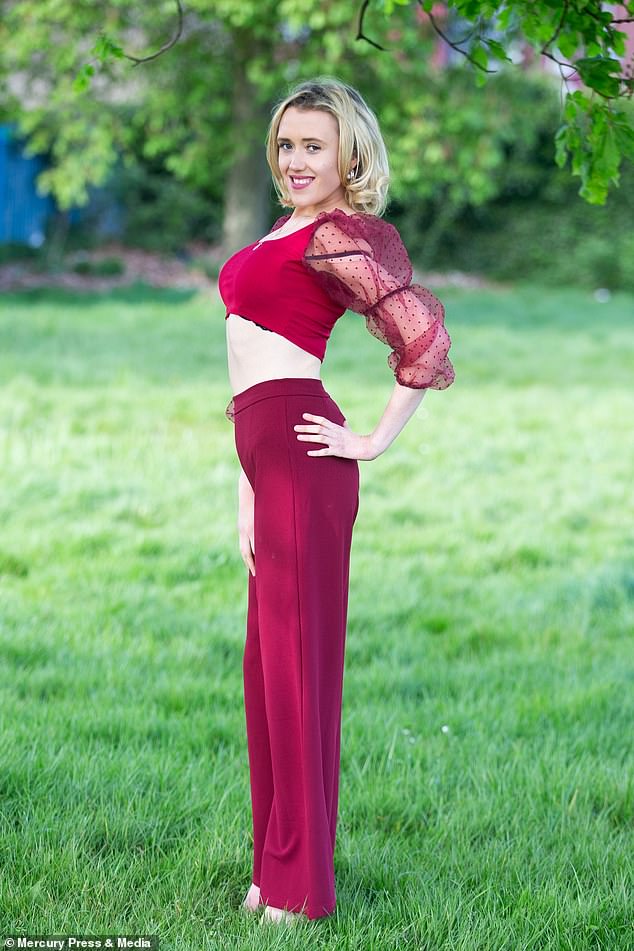 Using Youtube to learn to cook healthily, Em managed to kick the sugar addiction. It had caused her to experience dizzy spells, shortness of breath and extreme fatigue, sa well as heart palpitations (pictured now)

Em said: ‘I was diagnosed with depression and anxiety at nine-years-old, which I think played a huge part in my later life and contributed to my eating habits.

‘I turned to food and fizzy drinks as a form of therapy, and was always in denial of my habits.

‘I used to drink four or five bottles of Lucozade a day, I was robotic – I would make three trips to the shop per day to pick up a bottle.

‘In the mornings, I would go and get my dad some milk from the shop but also go and order a big breakfast from the local cafe, with my bottles of Lucozade. 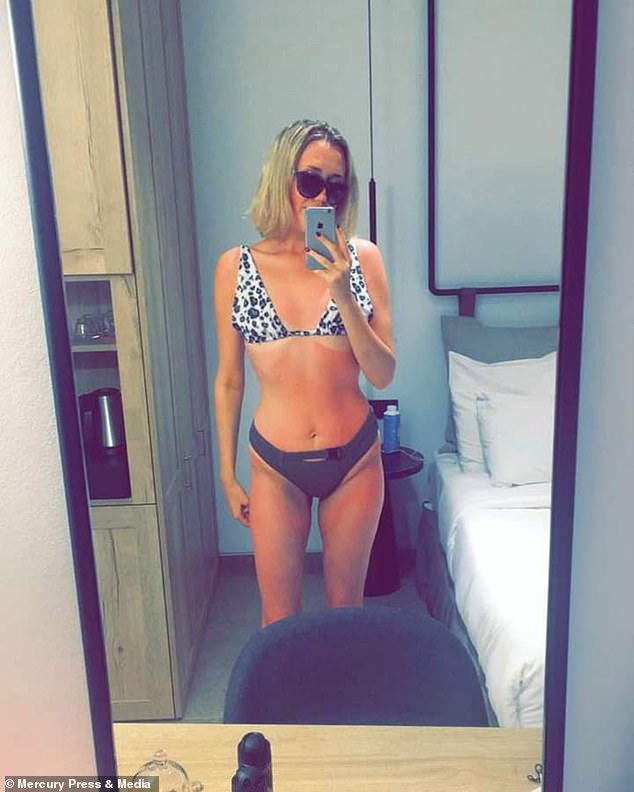 At the height of their addiction, Em would go to the shop thrice a day to buy more Lucozade in order to quench her thirst for fizzy, sugary drinks (pictured now)

‘I was cooking at crazy times to eat through the painful void and would order takeaways at 3am and wait for them in the middle of my street so my dad didn’t hear the delivery man knock on the door.

‘I was so out of my own head that I would hide food and drinks in my pockets and under my coat so my parents didn’t see.

‘It came to a point where it affected my health massively, I had a pale complexion and was in a mentally low state.

‘I realised I had an illness with food and a sugar addiction but I lost all my self-worth and cut myself off from daily life. 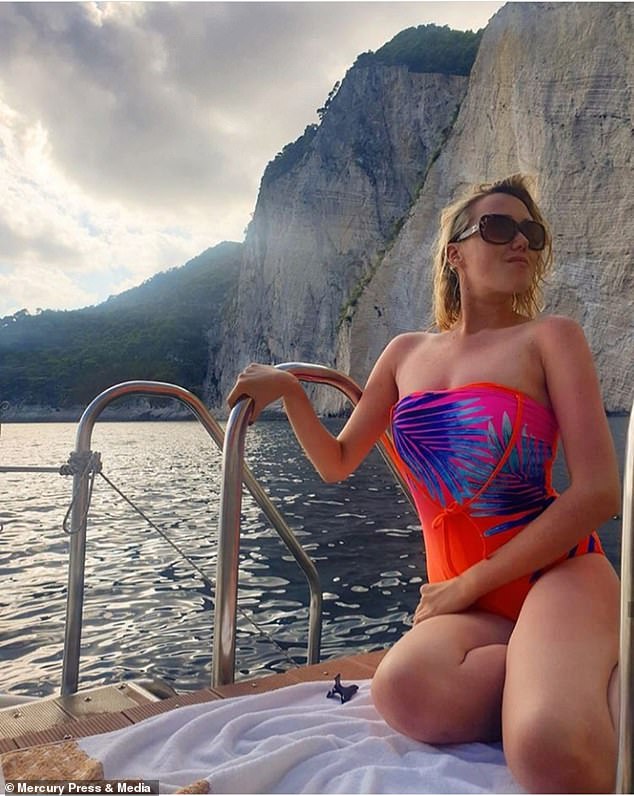 ‘I think if I had kept eating like that I’d have been dead by now, it was such a toxic environment.

‘I’ve been through the depths of hell, but now I feel a lot better because I’m nowhere near as tired, I feel so energetic and I’m in a better headspace – I feel like I’m the person I always should have been.’

In 2017, Em began to suffer from severe side effects of consuming so much sugar, such as dizziness, but she was terrified to speak to her doctor about it.

The actress also became chronically tired and would sometimes even miss work as a waitress because she couldn’t get out of bed.

Whenever Em tried to cook food for herself she would opt for large bowls of pasta with cheese and mayo late at night, and wash the dishes to hide the meal from her parents. 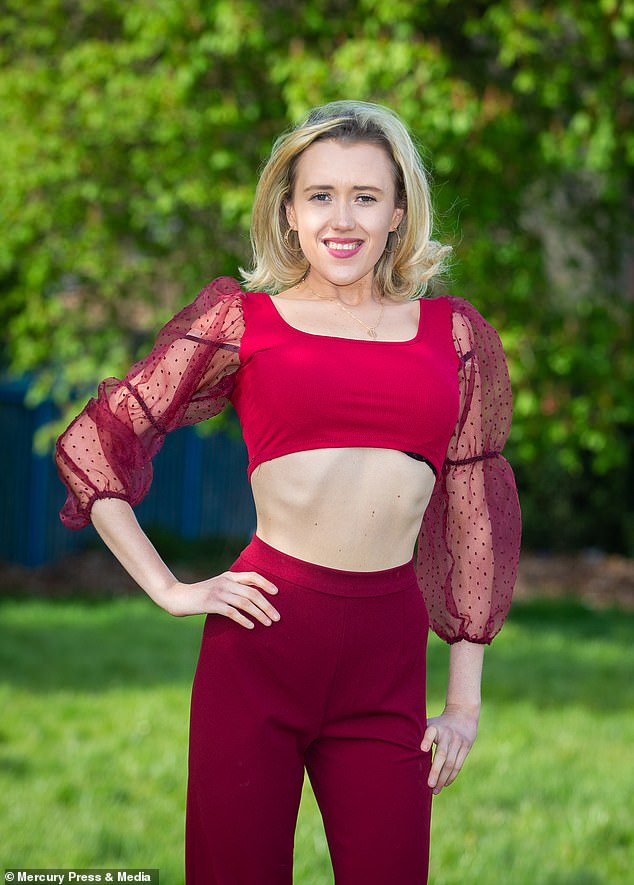 Whenever Em tried to cook food for herself she would opt for large bowls of pasta with cheese and mayo late at night, and wash the dishes to hide the meal from her parents (pictured now) 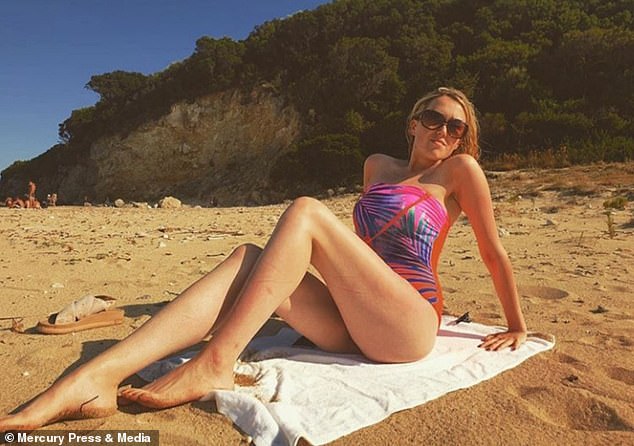 She went completely cold turkey on sugar, and now lives a carb-conscious lifestyle, avoiding meat and limiting eating potatoes and bread to once a week, but also gives room for treats such as sugar free cake and the odd fast food takeaway (pictured on holiday after her weight loss) 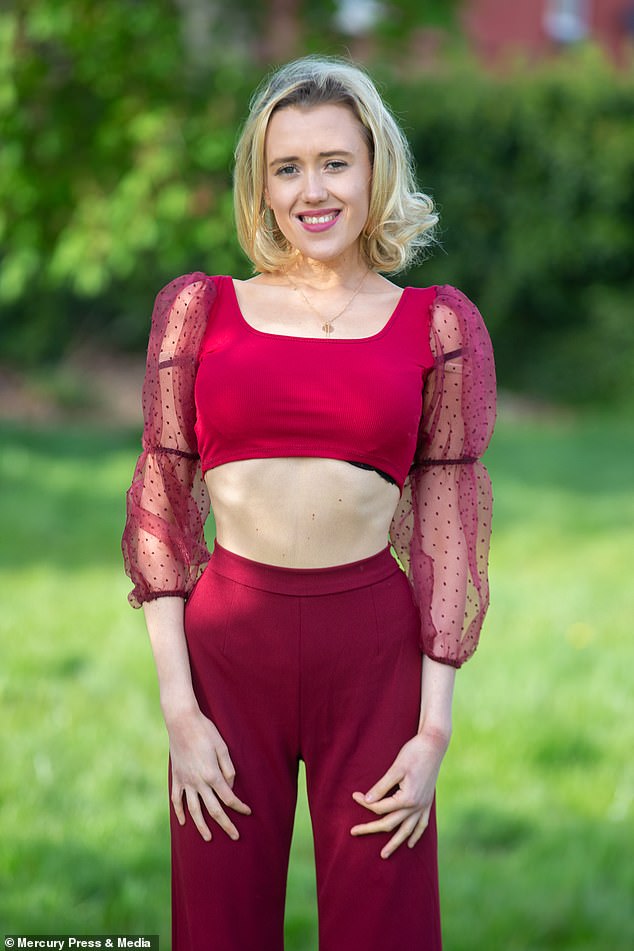 Em said: ‘The dizzy spells came on any time and I was scared to go to the doctors about it.

‘They happened more and more frequently to a point where I thought “am I ever going to give a normal life?”

‘I was tired all the time, even after 12 hours of sleep my entire body was in chronic fatigue.

‘I felt so ashamed and alienated so I lied to my family that I was going to work when really I couldn’t get out of bed.

‘One day I was getting in the bath and left the door open and my mum came past and saw me – usually I hid my weight and stretch marks.

‘She told me to go downstairs after my wash, where she told me she felt like crying when she looked at me because she was shocked at my size and it broke her heart. 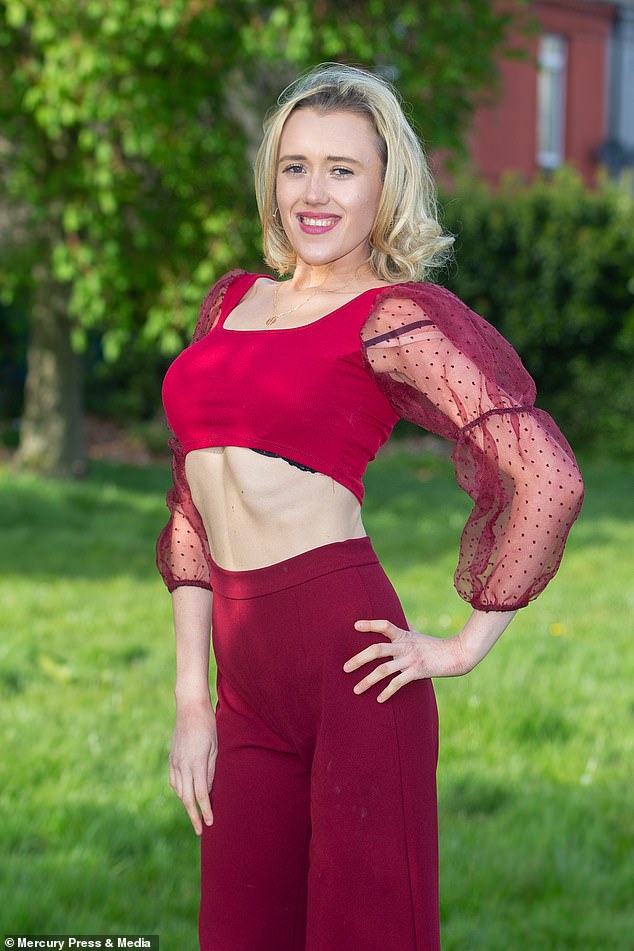 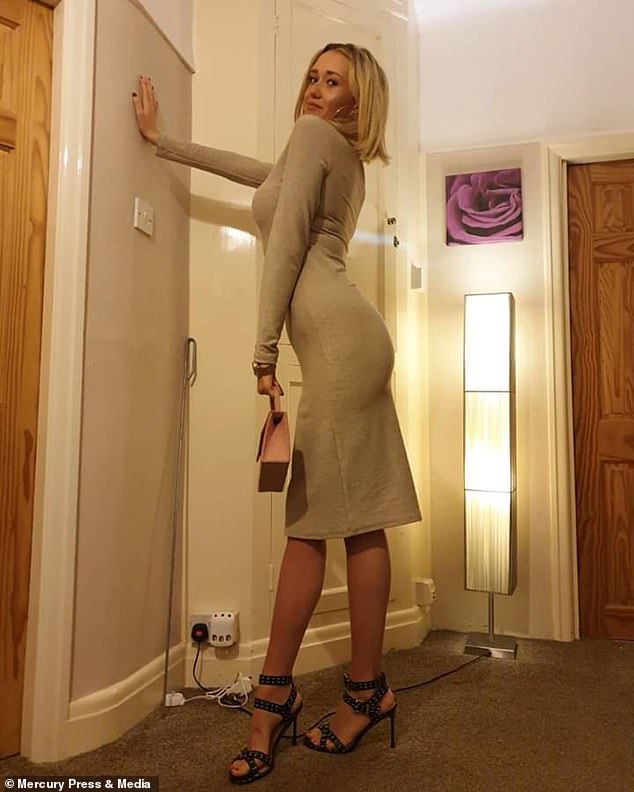 ‘But I was really self-defensive so I accused her of having a go at me and ignored her.’

After years of denying her health problems, Em finally began to accept herself and decided to take the first steps to change her life in 2018.

At first she tried attending Slimming World sessions, but ended up figuring out her own unique way to learn how to eat healthier via YouTube.

Over the last 12 months, Em has lost eight stone and weaned herself off her sugary drink addiction, by drinking alternatives such as Coke Zero, and it’s been two-and-a-half years since she’s had a full sugar drink.

She went completely cold turkey on sugar, and now lives a carb-conscious lifestyle, avoiding meat and limiting eating potatoes and bread to once a week, but also gives room for treats such as sugar free cake and the odd fast food takeaway. 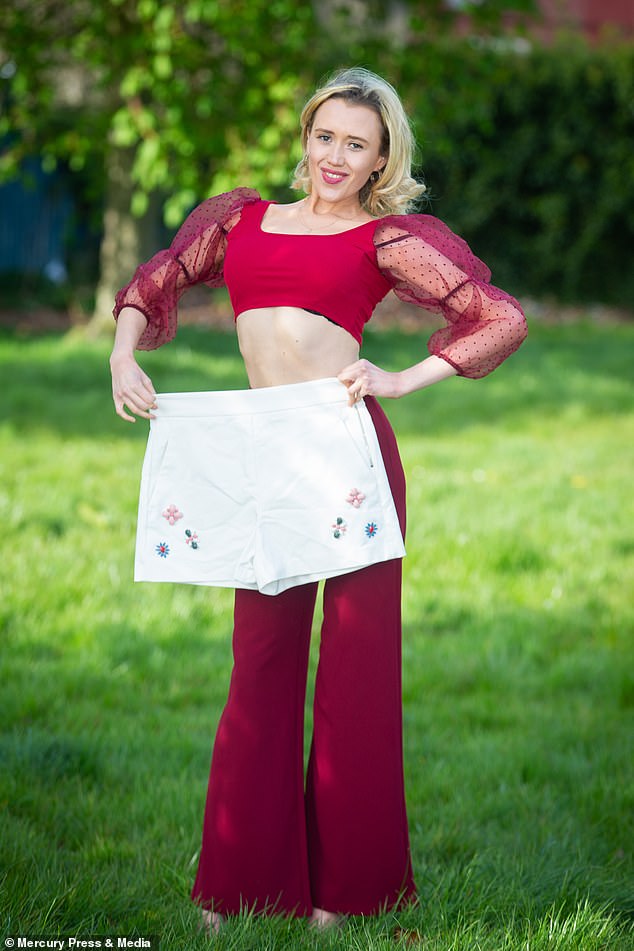 The super slimmer showing off her weight loss by holding an old pair of shorts in size 16. Em is now a size 6 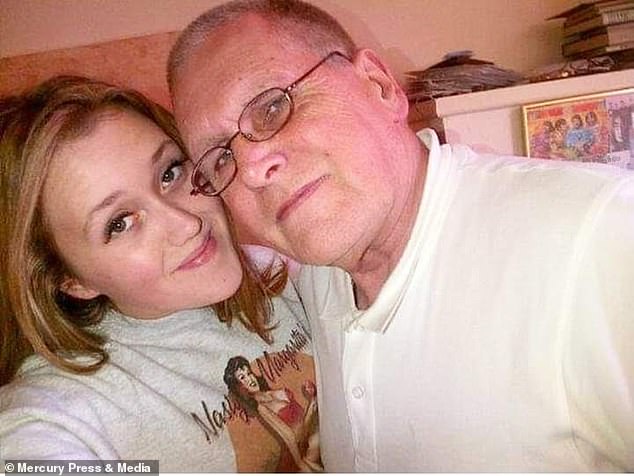 Em’s father Stephen passed away in January 2020, and the former sugar addict said it was a full-circle moment, knowing he was proud of her on her death bed (pictured with Stephen)

Em said: ‘All the signs that I needed to change were there, I just had to accept it first – it took something in my head to tell me that I had to stop.

‘I wasn’t just putting weight on, I was battling a mental illness and addiction.

‘It was killing me and I needed to change or I’d be dead.

‘I don’t know exactly what it was that made me take the steps to transform my body – I just thought “enough is enough”. 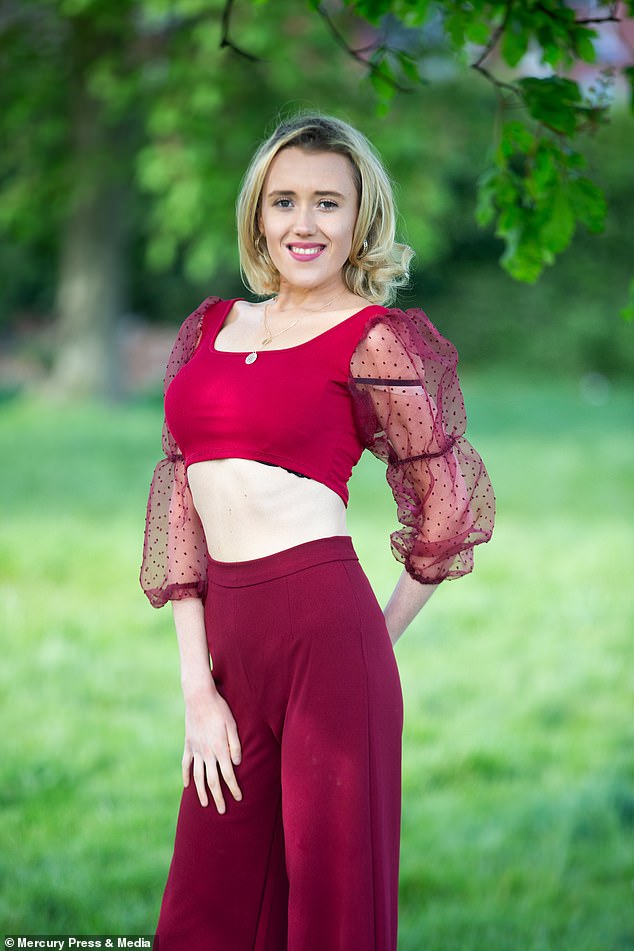 ‘I attended a couple of Slimming World classes but I didn’t think it was for me, so I looked on YouTube and found ways to eat healthier and searched videos on how to chop an onion to help me cook.

‘Going cold turkey on the sugar was hard because I was seeing sugary stuff on the shelves at supermarkets and thinking “I need this”.

‘I had bad withdrawal symptoms where I was shaking in bed from sugar comedowns, my heart was racing and I was terrified – I felt like my body would explode.

‘Now I follow my own bespoke lifestyle and found a way of adapting my life to help myself – I watch my carb intake, I walk everywhere and I keep active through performing and working a bar job on the side.

‘Of course I still have days where I have a Chinese or Indian takeaway but I make sure I eat healthy the day after.

Breakfast – Big brunch from local cafe with three sausages, egg, bacon and chips, four bottles of Lucozade, and half a tub of cheese pasta

Lunch – Two crisp sandwiches with slices of meat, sausage rolls, packet of crisps, and the rest of the cheese pasta

Breakfast – Beans or egg on brown toast with no butter

‘When my dad Stephen, who passed away in January, was on his deathbed it became a full circle and he was really proud of me – he was one of my big inspirations and he helped pay for my healthy shopping.

‘I still have stretch marks which make me think “did I really let myself get that big?” and people now say to me that they can’t believe how much weight I’ve lost.

‘I’ve now set up an Instagram account where I offer support and want people to know that no matter what you’re going through, you can get yourself back and do it on a budget.

‘You’ve just got to accept it and do it yourself – don’t look at what others are doing, find what works for you, and see where your journey takes you.’