A staggering 60 dogs are now stolen every week. Many spend the rest of their days churning out litters in miserable puppy farms as part of Britain’s £300 million dog business. In truly horrific cases, they are used as bait in dog fights.

And of these missing dogs, only one in five is ever reunited with its owners. But, just as in the family favourite film A Dog’s Way Home — currently showing in cinemas and telling the fictional tale of a lost dog’s epic 400-mile journey to find its owners — sometimes there are real-life happy endings, too.

Here, owners who had all but given up hope tell how, years after their beloved dogs were taken, they were reunited in extraordinary circumstances.

How could the criminals be so cruel?

Five-year-old cocker spaniel Bella was stolen from a farm in Braintree, Essex, in October 2015. She was reunited with her owner, HR co-ordinator Francesca Debnam-Sharp, 25, after being found, along with four other dogs, dumped by the side of the road in Kent. 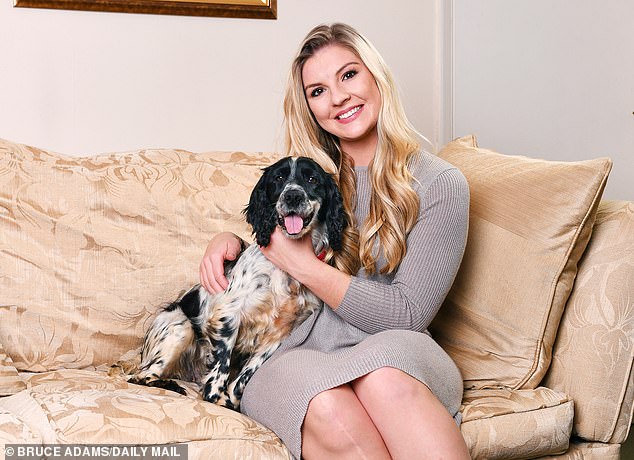 Francesca Debnam-Sharp was reunited with her lost 8 year old Cocker Spaniel ‘Bella’ after more than 3 years. Pictured at her home in Solihull, Birmingham

Bella was a working dog on my family’s farm but she was also a pet and was very loved. As a working dog, she slept in a locked kennel. She was stolen at some point during the night.

My parents and I took to social media and phoned the police. We put up posters. We did everything we could.

We absolutely adored her. She hadn’t been spayed though we had never bred her and had no plans to, but I knew that was why she was taken.

Whenever I saw a spaniel in the street, I would slow down to check if it was her, but as the years passed, we all started to lose hope. That’s why it was such a bolt from the blue when we got the call in October last year from a dog warden saying she’d been picked up and identified from her microchip.

I was living in Birmingham at the time and drove straight to my parents’ farm after they went to pick her up from council kennels. I just couldn’t believe it when I saw her. She was so happy to be home, but the state of her broke my heart. How can anyone do this to a defenceless creature?

When I saw her, she was in a bad way. She had a severe case of mange, her skin was covered in sores, and her fur was matted and stained yellow from where she had been sat in urine.

She hadn’t been exercised at all. She was just bred and bred until she was of no use to the heartless criminals who stole her.

We are like best friends now and she’s recovered well. She is still full of energy and like my shadow.

It makes me furious that the law treats dog theft the same as theft of property.

This needs to change, especially as people are only sentenced in accordance with the monetary value of the dog. The value of a dog can’t be defined by money — they are part of your family.

He’s so anxious, it breaks my heart

Mother-of-two Nicola Phillips, 35, had her beloved seven-year-old cocker spaniel Scampi stolen from her home in Coleford, Somerset, in August 2013. The administrator searched for him for five years until he was found wandering the streets of North London last July. 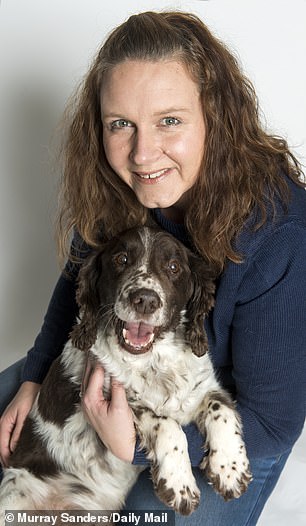 Scampi was stolen from his locked kennel in the early hours. He was a working dog, part of our family and deeply loved.

We called the police, put up posters, combed the streets and I contacted Dog Lost and set up a Facebook page. Over the years, I would get messages about possible sightings but it always proved to be nothing.

My main fear was that he had been taken for fighting but I think because he hadn’t been neutered, he was of use for breeding.

In July I looked at his Facebook page for the first time in months when something caught my eye — a video of a dog walking the streets of Islington on his own. It was posted by a passerby. My heart stopped. I had no doubt it was Scampi. He had been picked up by the dog warden in North London. I phoned immediately and drove 200 miles to get him immediately.

We met in a park and I didn’t recognise him at first. His head was tilted, I later learned he’d had a stroke, his fur was matted and he was covered in fleas. He was partially blind and deaf. He just looked so sad. It was horrible. He didn’t recognise me straight away, but on our journey home, he kept staring at me. I felt like he was trying to picture where he knew me from. But as soon as he stepped out of the car, he knew where he was and started running around like a puppy with his tail wagging.

He has settled in again but is anxious about a lot of things. When he has a drink he drinks it all. It’s the same with food; there’s a desperation to it, a panic. It’s heartbreaking to see; he must have been left hungry and thirsty so many times.

I don’t think the people who do this realise the pain they cause. I didn’t sleep for weeks. I felt violated — like part of my family had been taken. He’s an old man now, he sleeps on the sofa. I cherish every day together.

I sobbed…Belle still knew me

Four-year-old springer spaniel Belle was stolen from owner Trisha Joseph’s home in Powys, Wales, in December 2016. Mother-of-one Trisha, 45, a gardener, and partner Wyn Price, 56, a pest control officer, were reunited with her just before Christmas. 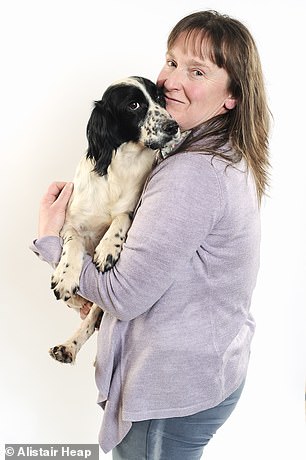 Trisha Joseph reunited with Belle who was stolen in 2015. They were reunited after she was seen for sale on-line

We’d had Belle since she was three months old. She slept in a locked barn attached to the house, with her puppy Bess and our terrier Holly. One evening we noticed the lock on the barn was broken and Belle and Holly were gone. Bess was running around distraught. It was one of the worst experiences of my life.

We spent the night calling their names through the woods near our home. The police came but there wasn’t much they could do.

Two days later we received a call to say Holly had been found 100 miles away in Worcester and taken to a vet’s where her microchip identified her. It was a bittersweet moment: we had Holly back, but where was Belle?

I spent hours checking with missing pet charity Dog Lost, and creating Facebook accounts. I put up posters and searched dog- selling websites. I looked for puppies being sold when I knew she might have had a litter.

Almost two years to the day, I woke up and my phone was going crazy. I had at least 40 messages from people I didn’t know saying they’d seen Belle being sold on a Facebook gun dog page. I messaged the seller and sent a photo. He replied immediately, full of apologies. He’d bought her six months ago for £300 and had no idea she’d been stolen.

He was only 18 and couldn’t have been more helpful. We arranged to meet in Worcester the next day. I was in such a mess, my sister had to drive. Then she suddenly said: ‘It’s her Trisha, it’s Belle’. I ran to Belle. I hugged her, sobbing, telling her how much I loved her. She was timid but her tail was wagging, she knew me still.

She had been called Lady since being taken and although I could tell she’d been bred from, she had been treated well by her owner of the past six months. When we got home Wyn, who is not an emotional man, fell to his knees. Holly and Bess remembered her, too.

We never discovered who took her and, needless to say, our dogs sleep in the house now.

My baby was left dumped by a road

English bulldog Holtz was stolen aged 18 months as she played in the garden of her home in Waltham Cross, Hertfordshire, in June 2011. Pawnbroker Ruth Kirby, 34, searched tirelessly for her and always held onto the belief she would find her one day.

Our home, in a leafy, quiet part of Hertfordshire, was perfect for dogs. Holtz and my other dog, a Jack Russell called Scamp, could play in the garden, which was surrounded by a six-foot wall, whenever they wanted. 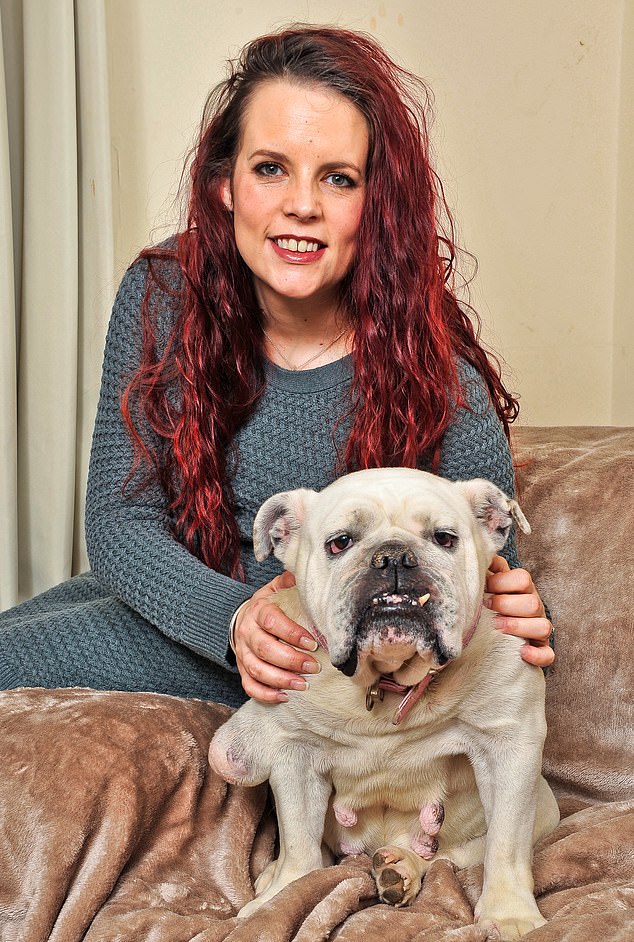 Ruth Kirby and her English Bulldog Holtz. Holtz was stolen seven years ago from Ruth’s garden in Hertfordshire. She was used on a puppy farm to breed and breed until she was so ill she was of no use. She was dumped in Norfolk and reunited with Ruth last year

One morning I came downstairs and Holtz wasn’t there. I thought she had gone out into the garden using her dog flap, but it slowly dawned on me she was gone. It was just the worst feeling.

I phoned the police, I made posters, I put adverts in magazines and the local newspaper and I used social media to help find her. I would spend hours combing websites such as Gumtree, looking for anyone selling a dog like her. Sometimes I would receive messages about possible sightings, but it always came to nothing.

I loved her so much. I’d had her since she was a puppy. She was like a child to me.

Worse still, she hadn’t been spayed so she could be bred from, and with bulldog pups selling for £2,500, I knew this would be her fate.

The thought of her being cruelly treated was so upsetting. I couldn’t sleep, I couldn’t concentrate on anything. I just wanted my baby back. Seven years passed, and Holtz was always at the back of my mind. When I received a call from a vet in Norfolk one day asking if I’d lost a dog, my immediate thought was that Scamp had gone missing —and I checked on him in his bed.

I didn’t think for a moment they meant Holtz. But it was! Her microchip identified her. I couldn’t believe it.

I drove the 100 miles to Norfolk immediately. Holtz had been dumped by the side of a busy road, along with an elderly Chihuahua who sadly wasn’t chipped, and had been miraculously found by a veterinary nurse on her way to work. 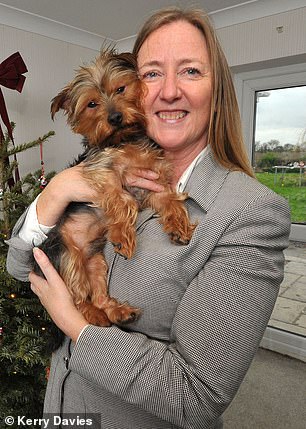 Terri Harman and her dog Barney. Barney went missing in October 2017, they were reunited last year after he had been missing for a year

Poor Holtz had been through a terrible ordeal. She had been puppy farmed within an inch of her life. She had a huge tumour, severe mastitis, and her nails were so long she couldn’t stand.

She had spent seven years of her life in a pen, never loved or exercised. It was just heartbreaking — all to make money, and judging by the state of her, she had made them a lot.

Yet as she sniffed me, I saw her tail twitch as the happy memories came back.

As I now had a young family, I had a difficult decision to make. Poor Holtz needed a quiet life, so I arranged for her to live with my sister, Joanie.

I still see her regularly and my sister adores her. She sleeps a lot but is doing OK. At least she is living now and not just existing.