Not since she shot to fame 20 years ago as Jane Austen’s heroine Fanny Price in Mansfield Park has Frances O’Connor taken centre stage quite so effectively.

Her latest role isn’t a particularly sexy one, she’s more a mother battered by life, but it is possibly the role of a lifetime for the actress who won a Golden Globe nomination for 2014’s The Missing and also starred as Rose in Mr Selfridge.

Unbound by period dress, the British-born Australian actress shines in ten-part Sky Atlantic drama The End as Dr Kate Brennan, a woman juggling an ever-expanding pile of issues that would have most of us refusing to leave our bedrooms.

As a palliative care doctor she looks after the terminally ill at a hospital on Australia’s Gold Coast, and at the start of the series we see the kind of ethical dilemmas this throws up when a seriously ill young woman shows Kate the poison she’s planning to kill herself with. 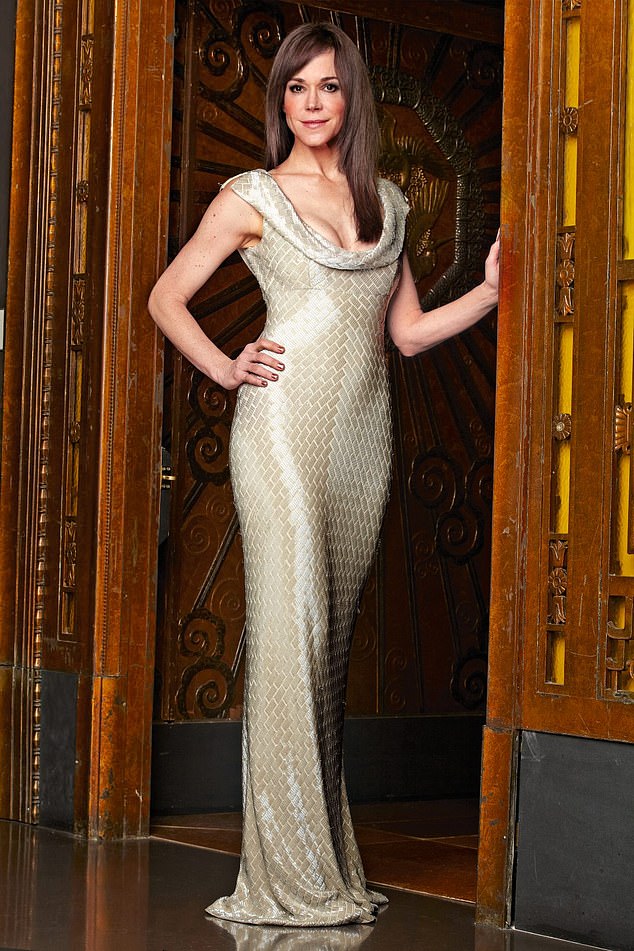 Kate confiscates it, but then finds herself in a battle of wills with the woman’s husband.

Things are no easier for her at home. Her estranged husband is in prison for embezzlement while her eldest child Oberon (played by teenage transsexual actor Morgan Davies) is transitioning into a boy and has attempted suicide once already.

Her younger daughter Persephone (Ingrid Torelli) is playing up by leading rebellions at school in a cry for attention.

Kate then transports her from Surrey to join her in Australia – in an eye-wateringly expensive retirement village.

‘It’s a rare show that really looks at what it is to be a woman in each of these different stages of life,’ says Frances. 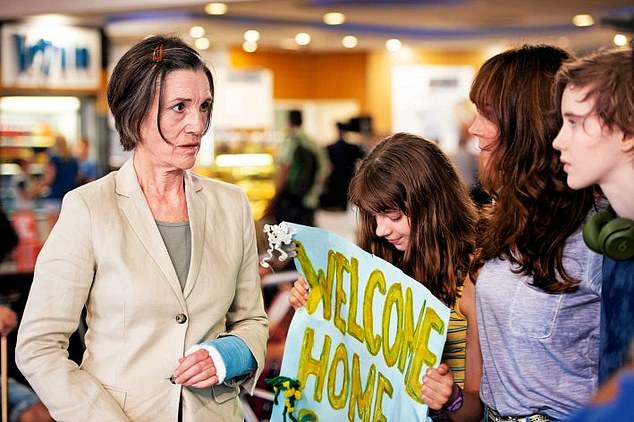 O’Connor, right, as Kate in The End with Edie (Dame Harriet Walter), Persephone and Oberon

‘I loved that the story didn’t deal in stereotypes but has created wonderful, very flawed characters.

‘Kate messes up a lot. It was such a pleasure to read this very real and funny script, and I hope we’ve done it justice.

‘The #MeToo thing might have changed things a lot, but scripts like this about women – especially women over 30 – are still not being written enough, which is ridiculous when it’s women over 30 who are watching television. We need much more of this kind of stuff.’

The meandering and occasionally surreal story follows Kate and her family as they attempt to negotiate life’s many challenges.

Ugh, I’ve always been so nervous before sex scenes. Having to pretend to be doing stuff while half naked with a stranger, and making all the noises…
Frances O’Connor

They fall out, make up, love and hate each other. Refreshingly original, it’s about life, love, family and sex.

Frances didn’t think she’d still be doing sex scenes in middle age. Perfectly understandably, she’s always hated having to get intimate with a stranger in front of the camera, and had hoped that at the age of 52 those days would be behind her.

‘Ugh, I’ve always been so nervous before them,’ she grimaces. ‘Having to pretend to be doing stuff while half naked with a stranger, and making all the noises…’

But she at least had a helping hand. The show used an ‘intimacy director’ – someone hired to carefully arrange sex scenes and guide the actors and directors about physical touch – a growing speciality in the film world.

It made the experience rather less painful, she says. ‘Everything is choreographed like a dance. It means you know what you’re doing and there’s a lot less fumbling and getting things wrong. Thank God!’

But the show is also very much about death, and controversially so. It looks at euthanasia, suicide and how people feel about mortality. 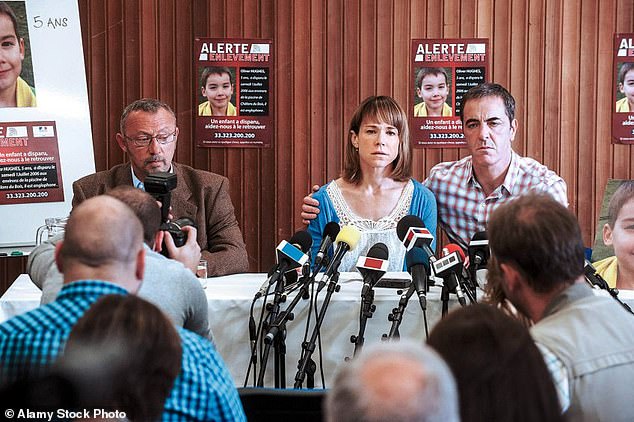 O’Connor won a Golden Globe nomination for her performance in 2014’s The Missing, opposite James Nesbitt (pictured)

It unflinchingly shows the pain of being forced to stay alive when you don’t want to, the indignity of a painful death and how some people are desperate to cling onto life while others desperately want to end it.

‘Kate doesn’t believe in euthanasia but she becomes conflicted by it as the series goes on,’ says Frances. ‘I’m conflicted too, it’s such a complicated issue.

‘It’s hard to legislate in a blanket kind of way about something that’s so personal, and it’s hard to see how it wouldn’t be open to corruption.

‘I spent a couple of days working with palliative care doctors to get a bit of an understanding of the role, and what they do every day is truly mind-boggling.

‘It’s all about giving people an excellent death. People are very uncomfortable with death – they don’t want to spend time talking about it, but maybe we should. I think the show will ruffle some feathers.’

For Dame Harriet Walter, 69, the issue is something she’s thought long and hard about.

‘The great thing about this show for me was my character is fully rounded – she’s an adolescent, a child, a middle-aged old woman – she’s terrific to play,’ says the acting veteran.

‘The subject matter also feels important. I’m getting nearer to it all being terribly relevant, which meant I did have to think about whether I could take it on.

‘A decade ago I did a television play with Julie Walters about a euthanasia clinic in Switzerland, and it was all so brutally sad I did think, “I can’t go there again.”

But it’s a really important subject to revisit, and in this show it’s looked at with humour and a lightness of touch. 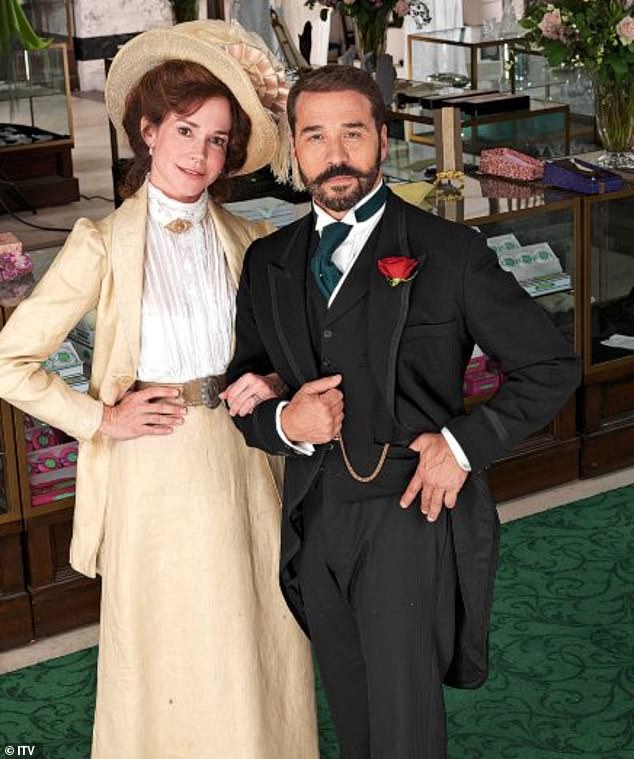 O’Connor starred as Rose in Mr Selfridge, as seen with co-star Jeremy Piven as Mr Selfridge

Assisted dying is something I’ve thought about, but there are problems in making it legal. It’s very hard to legislate against Harold Shipman-type situations.

‘But one thing I have done is written a “living will” to make clear what I do want should something happen to me – it’s important to do these things when you’re still pretty sane.

‘It’s hard to come to terms with the fact that you have to make these decisions, but I have discussed it with my family and my solicitor.

‘To ensure your loved ones are protected and exonerated of any criminal repercussions is something you have to do. So, it’s important to articulate whether you still want to be kept going once you can’t eat or speak while you’re sane enough to do it.’

There’s a lovely line, which I helped our scriptwriter with, about how the freedom of the 60s never reached Surrey. For people of that generation there was a lot of sexual repression and ‘lie back and think of England’
Dame Harriet Walter

Dame Harriet, who is married to American actor Guy Paul, hopes the show will make people talk about it.

‘It’s a private thing, but I hope this provokes some discussion. It’s good to get people talking – we’re frightened of it but there are practical decisions to be made.’

The series is based on the real-life family of Australian writer Samantha Strauss, in particular her grandmother who found a new lease of life once she moved into a retirement village.

Samantha has joked that the main topics of conversation there were sex, alcohol and death, and Harriet says she adored playing a character who starts off repressed and unhappy but changes her life.

‘There’s a lovely line, which I helped our scriptwriter with, about how the freedom of the 60s never reached Surrey,’ she says.

‘For people of that generation there was a lot of sexual repression and “lie back and think of England”.

‘Edie had very little positive experience of sex. The more you learn about her, the more you see she was bullied by her husband.

‘But when you travel to a new country there is a wonderful opportunity to reinvent yourself – even at Edie’s age.’

Harriet too had the help of the intimacy director, as Edie explores her body and her sexuality at the retirement village.

‘It’s a big deal depicting a sexual relationship for someone at my age,’ she admits. ‘I don’t actually want to watch other people having sex – even if they have beautiful bodies – and this has been done discreetly, you don’t see much.

‘The notion that this element of you dies is such b*****ks. We were filming in a real retirement village with the residents as our extras – and even then we could all see it going on.

‘I mean when I think of my grandma… but she must have done it! It’s still an important element for people my age, although there’s also a wonderful freedom in the idea that you don’t have to do it any more if you don’t want to.’