In the Grimms fairytale a spoiled princess is rewarded with a handsome prince after kissing a frog, but that’s one legend you’ll be hoping doesn’t come true after seeing this very strange ring.

A woman from Oklahoma has shared a picture of a bizarre piece of jewellery with the Facebook group That’s It, I’m Ring Shaming after spotting it elsehwere on the social networking site.

The seemingly normal ring was adorned with a golden frog carved on its top. However, a cheeky design of a prince with an erect penis could be found underneath the frog when the ring was shown upside-down.

The ring sent jewelry enthusiasts in hysterics, with many saying they wanted it for themselves to ‘scandalize’ their grandmothers and leave tiny penis imprints on their fingers. 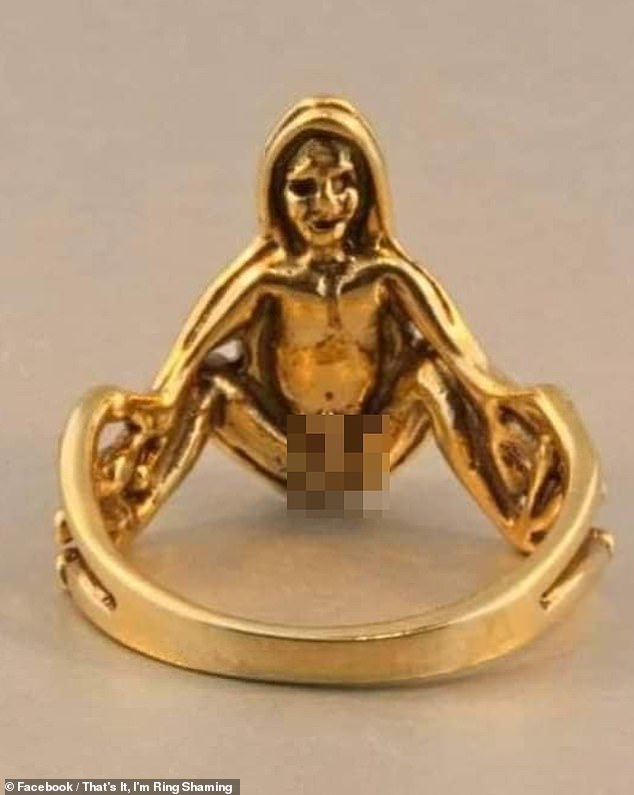 A woman from Oklahoma has shared this ring, which is shaped like a frog on the surface, but reveals a naughty prince underneath

The gold ring looked perfectly innocent from above, with a normal ring band and a small frog wearing a crown with an emerald gem on the top.

However, if one were to lift the ring and turn it upside down, they would come face-to-face with a tiny prince carved on the frog’s flip side.

The prince, carved with his legs and arms open, is naked with a protruding penis between his legs.

The ring seemed to be a cheeky interpretation of the Frog Princess tale, where a frog turns into a prince after receiving a kiss from his beleoved. 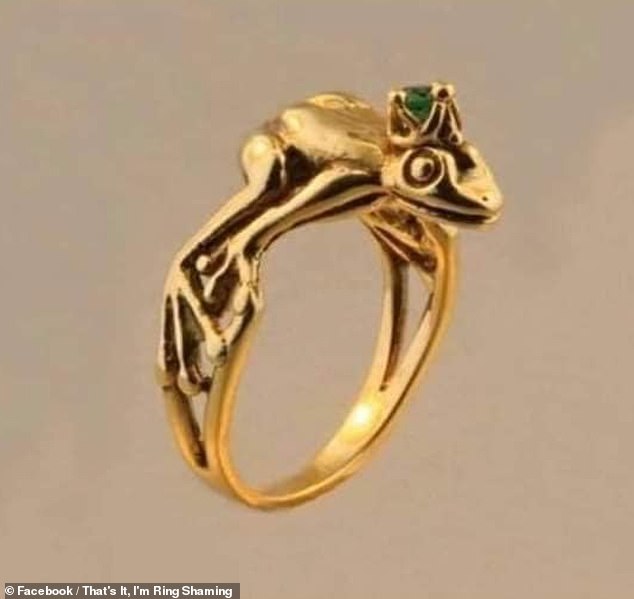 The ring looks perfectly normal when worn on the finger, but reveals the prince when flipped upside down

People were left in hysterics when they saw the ring, which many saying they wanted to purchase it

Women particularly enjoyed the surprising cheeky design of the ring.

‘That which the eye has seen, and now cannot unsee,’ one said.

‘every time I see this one, I just start giggling again,’ said another.

‘I want one to scandalize my grandma with,’ one said.

‘Love this and need it immediately,’ said another.

Some also observed the ring would leave a tiny penis imprint on a person’s hand if it had a snug fit around their finger.

‘Imagine the mark that would leave on your finger though,’ one pointed out.

‘Please tell me it leaves little penis impressions on your finger,’ said another.

I just realized if this ring fit snuggly or your finger swelled a little, there’d be a little pecker imprint on your finger.

However, some did not like the ‘trashy’ ring and its naughty secret design.

‘What is this monstrosity about?? Like I want some little penis rubbing my finger… ew,’ said

‘Its so trashy,’ said another.

Many people were seduced by the ring’s unexpected hidden design, but not everyone loved it , calling it trashy