Movie magic can be created in the most ordinary places.

A world away from the glitz of Hollywood, in a warehouse on an industrial estate in Bristol, the latest instalment in the adventures of the world’s most mischievous sheep is slowly – painfully slowly – being created.

Animators at Aardman Studios are hard at work – it takes a week for each of them to create four seconds of stop-motion film, in which they make minute adjustments to plasticine models for each frame – to create their most ambitious movie yet.

Shaun the Sheep may have ventured into the big city in his first film in 2015, which took an incredible £100 million at the box office, but for his second, Farmageddon, he will be the first sheep to have an intergalactic adventure in what is quite possibly the wackiest and, yes, most magical film of the year. 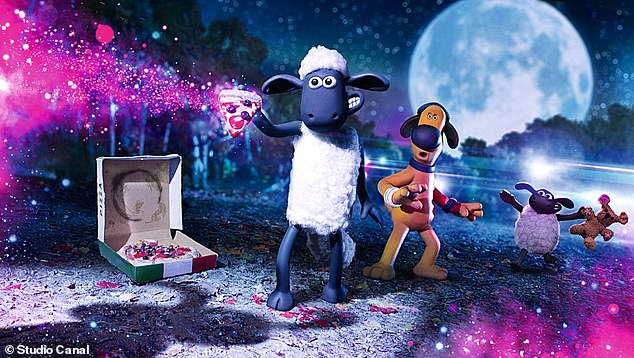 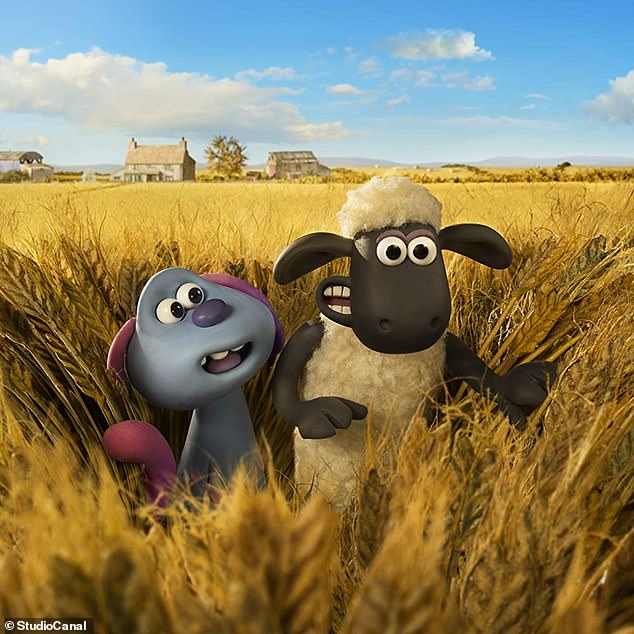 This month Shaun The Sheep returns to the big screen on a cosmic mission. He tries to save alien Lu-La from capture by Agent Red and a group of useless government officials

The first movie followed the antics of Shaun, the leader of his flock at Mossy Bottom Farm, when he decided he was bored and concocted a plan to have a day off.

He tricked the farmer into going to sleep, but the caravan he dozed off in accidentally rolled away and took him into the city, with his dog Bitzer in pursuit.

The sheep soon found life at the farm impossible without him, so Shaun and the flock headed to the city to find him. Cue hilarious misadventures in a barber’s shop and a posh restaurant, before Shaun and Bitzer hatched a cunning plan to get the farmer home.

The film was a bigger hit than even Aardman envisaged, with jokes to keep the whole family happy, and now a host of science-fiction favourites, from ET, Star Wars and 2001: A Space Odyssey to Doctor Who and even James Bond, have been thrown into the mix for the follow-up. 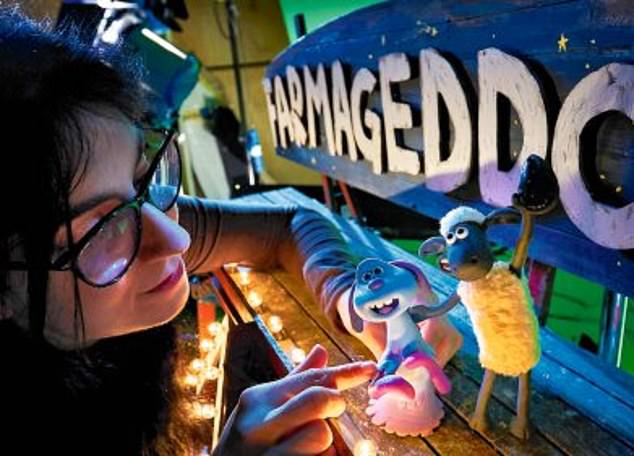 Farmageddon focuses on the arrival of Lu-La, an alien who has crash-landed on Earth and, desperate for food, arrives at Mossy Bottom when Shaun, who speaks only in ‘baaas’, orders a pizza for the flock.

Lu-La is being pursued by the ice-cold Agent Red from the Ministry of Alien Detection (MAD), who’s desperate to get her hands on an extra-terrestrial.

For the first time in his life, Shaun has to take some responsibility as he attempts to prevent Agent Red from catching Lu-La before she can return home.

Agent Red’s main problem, however, is that she’s assisted by a group of useless government agents.

In the meantime, reports of a UFO sighting in nearby Mossingham Forest have attracted hordes of visitors, and the farmer – not realising he’s actually harbouring a real-life alien – decides to cash in on the interest.

He enlists Bitzer to create a UFO theme park with hysterical results, and demands the dog dress up in a sparkly spandex suit to impersonate an alien. 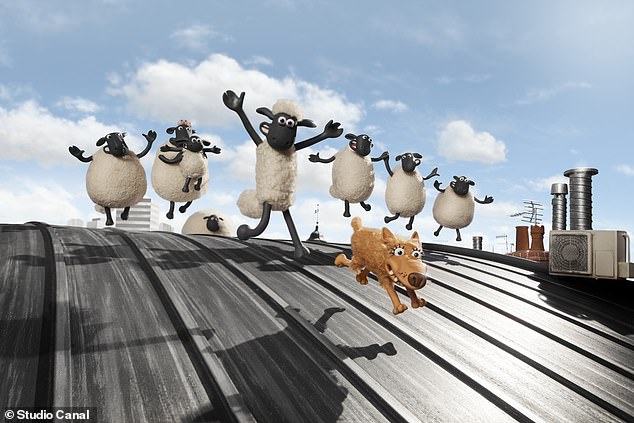 While attempting to save Lu-La, the flock sets up a theme park to confuse the officials – with the inevitable hilarious results

It’s no surprise work started on the second film almost as soon as the first came out, and the past four years have been highly intensive for the studio. 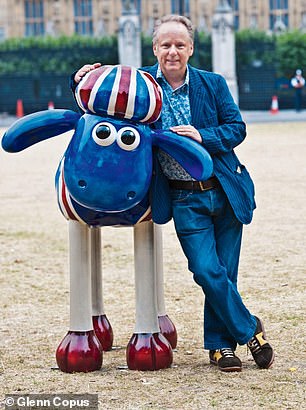 Down in the basement here at Aardman today it’s a hive of activity with 28 animators – the people who manipulate the plasticine models for each scene – working flat out on different sets.

One set has a miniature Bond baddie lair, where models of Shaun and Bitzer (in his spandex alien outfit) are suspended in mid-air.

It appears the pair are in deep trouble again.

In another, a distinctly amateur-looking ‘alien’ show is being performed at Mossy Bottom, and this time Shaun’s halfway up a crane.

On each of the sets, animators are quietly at work moving each of the plasticine characters’ limbs and faces just a millimetre at a time before filming the next frame.

It’s a painstaking job, as one accidental knock can cause hours of extra work.

The attention to detail is phenomenal – each character’s new pose goes through at least three checks before it’s filmed. 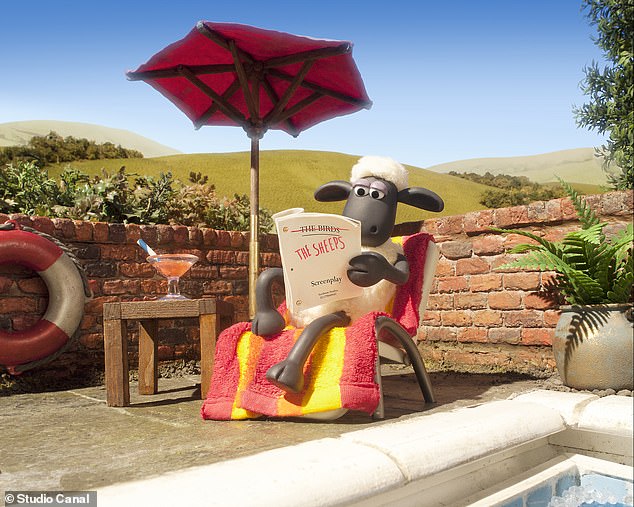 But thumb-prints on the models showing where the animators have adjusted them are allowed.

Audiences, it seems, like the more human touch in a world of bland computerised animation, and a modest meeting room just off the reception area proves just how much; unobtrusive cabinets contain the studio’s four Oscars, as well as numerous other awards from around the world.

SHAUN’S SECRETS – FROM KYLIE TO THE OLYMPICS

■ Despite his first appearance being made in the Wallace & Gromit classic A Close Shave in 1995 (left), Shaun is still in his early teens.

■ The soundtrack for Farmageddon includes a new song by Kylie Minogue called LAZY.

■ Bitzer the dog is voiced by John Sparkes, who is also the narrator of Peppa Pig.

■ A typical Shaun the Sheep model is 17cm tall and weighs around 100g.

■ Next summer Shaun will travel to Japan as an official supporter of the Team GB Olympic squad.

■ The film has up to 40 different sets, but because different parts of scenes are filmed at the same time there can also sometimes be six versions of each set.

Aardman made its name with the short film A Grand Day Out in 1989, the first to feature cheese-loving inventor Wallace and his intelligent but silent dog Gromit.

The man behind it, Nick Park, went on to make four more Wallace & Gromit films as well as 2000’s Chicken Run, about a band of chickens trying to escape being made into chicken pies, which is still the highest-grossing stop-motion film ever.

The studio has also made more traditional animated features such as Flushed Away, which followed a pet rat’s attempts to return home after being flushed down the toilet, and its films have made more than £1 billion in total to date.

Shaun made his first scene-stealing appearance in the Oscar-winning 1995 Wallace & Gromit short A Close Shave, which centred on a sinister dog’s sheep-rustling plan (he got his name because he was accidentally ‘shorn’ by one of Wallace’s inventions).

Shaun was the hero who foils the plot, and soon the cuddly sheep with big innocent eyes had his own BBC series that’s now racked up more than 150 seven-minute episodes and is watched in 170 territories.

There are even Shaun the Sheep theme parks in Sweden, Australia and Japan, with a Chinese one being planned.

‘Shaun is cute and cool at the same time,’ says creator Nick Park. ‘He’s good at sending up the way we are as humans. 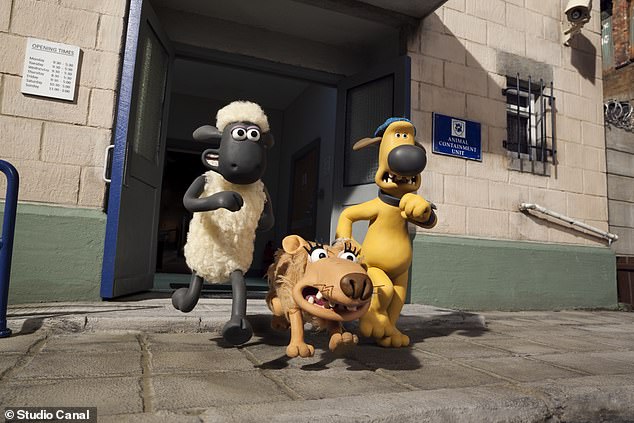 ‘I think we relate to that. He’s excitable and naughty. He’s a flawed character but in an innocent way.

‘He’s human, really. I think his basic flaw is that he doesn’t like to do what he’s told.’

The first Shaun The Sheep movie was Oscar-nominated, and Aardman will be hoping for more accolades with Farmageddon. 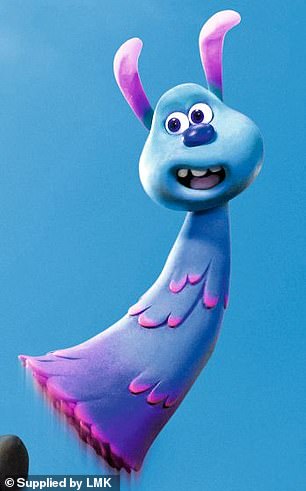 In the film alien Lu-La crash lands on earth and, desperate for food, stumbles upon Shaun’s farm – the aptly named Mossy Bottom

‘We wanted to give Shaun a real challenge so we had this mad idea of doing something entirely out of this world,’ says producer Paul Kewley.

‘Then we thought, early on, “Wow, what have we done? We’re trying to make a film about a sheep in space with no dialogue!”’

Because stop-motion takes so long to make, the team go over every element of each scene – every grin, eyebrow raise, and baaa – again and again as the story is being put together.

‘Even though there are no words in Shaun The Sheep, the dialogue is really important,’ says co-director Will Becher.

‘We go through hours of takes, listening to the right number of syllables in each “baaa”, because the animators rely on them when they’re creating the scene.’

The animators also rely on multiple models of the main characters, to be used on the different sets.

The studio has its own factory creating mountains of plasticine to specific colour recipes for its characters.

It also adds chalk – about ten per cent of the final product – which makes the models firmer and less likely to melt under the studio lights.

But not all parts of them are made from plasticine.

‘Quite a lot of their bodies are made from silicone as they’re less likely to be stretched or squashed too much,’ says model maker Will Harding. 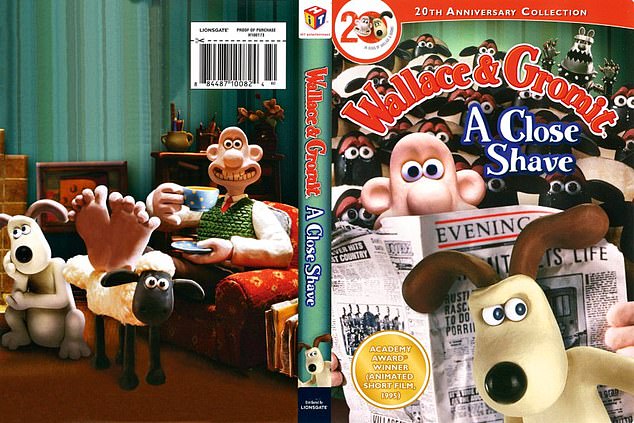 Shaun The Sheep’s first show A Close Shave, in 1995, was a huge hit with the public

Shaun is a mix of silicone, resin, plasticine and fur fabric, while Lu-La has a plasticine head, resin eyes and a silicone body.

Each animator is given not only the figures to model, but also a selection of mouths and, for the human and dog characters, eyebrows.

‘The eyebrows are the most expressive parts of our models,’ says Will.

‘They’re all oversized to show their reactions to things, and they’re always made from plasticine.’

In the new film Agent Red’s outfit is loosely based on Theresa May – they share a love of shoes and boxy suits.

‘She does look a bit like Theresa May, but I’m not sure she’s actually based on her,’ says Paul Kewley.

‘She’s the baddie but we do redeem her. There’s a reason why she behaves as she does.’

Aardman films may stress the virtue of good over evil, but they never preach.

It’s one reason why the company’s ten-year arrangement with American studio DreamWorks came to an end a decade ago – they now work with French outfit StudioCanal.

As well as trying to convince Aardman to computerise their work rather than moving each character by hand, the American producers insisted the films have a strong moral theme. 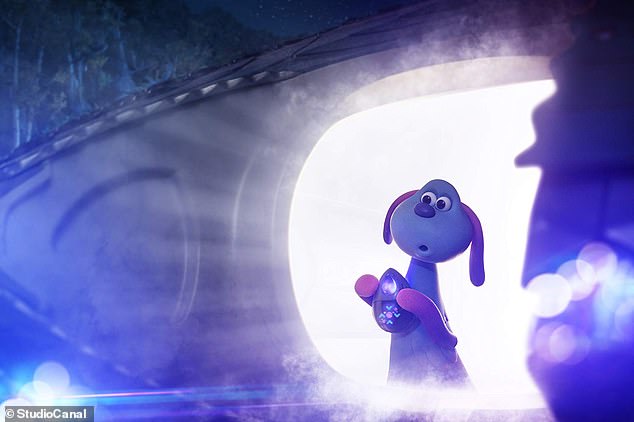 ‘We very consciously set out to not take ourselves too seriously because I was very aware that Hollywood movies for children often contained a very strong moral message,’ says Peter Lord, who founded Aardman with childhood friend David Sproxton.

‘It’s what people expect now, but we’re pretty subtle. I like to think the most important thing in what we do is that goodness wins out.

‘Shaun is profoundly good. It doesn’t mean he doesn’t cause trouble, but what he stands for is good and decent.

‘You don’t have to labour that point.

‘With the first Shaun movie people came out smiling, because they’d seen something that was funny and warm and life-affirming. That’s what we always hope for our films.’

A Shaun The Sheep Movie: Farmageddon is in cinemas from Friday.