Cautious shoppers have been buying up their Christmas dinners two months early, with Iceland, Waitrose and Marks & Spencer all reporting record sales of festive foods in the last week of October.

Frozen retailer Iceland, which has stores across the UK, reported a surge in sales of turkeys last week, with more than 4,000 customers snapping up the festive treat before Halloween.

Meanwhile, upmarket grocer Waitrose has seen turkey orders up 280 per cent, year on year, with sales of Christmas pudding and Panettone also soaring.

Some shoppers have even taken to social media to brag about their haul, with one writing: ‘Last pumpkin spiced latte of the year and ordered the Christmas turkey. Not bad for 10.15am in the morning.’ 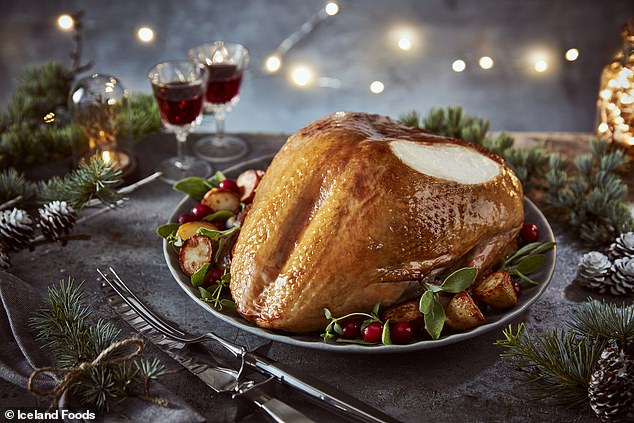 Cautious shoppers have been buying up their Christmas dinners two months early, with Iceland, Waitrose and Marks & Spencer all reporting record sales of festive foods in the last week of October. Pictured: A turkey from Iceland

Smaller birds and crowns are seeing strong sales in Waitrose, perhaps a reflecting the move toward smaller Christmas gatherings amid lockdown restrictions with more first time cooks whipping up Christmas dinner this year too.

Meanwhile, sales of advent calendars already up 40 per cent at Marks & Spencer as customers ‘get ahead’ with their Christmas shopping

How much Christmas food has sold so far in 2020?

Turkey crowns are proving extremely popular, thanks to their size and ease of cooking, with orders up 228 per cent at Waitrose on last year and the premium Bronze feathered crowns are up 242 per cent.

Waitrose’s small free range Bronze Feathered Turkey is a top choice this year too with orders up by a huge 550 per cent.

Christmas pudding are up five percent and Panettone are up 25 perceent.

With puddings, Waitrose has seen a significant uplift across the smaller portion sizes – with puds 100g -400g puds are up 34 per cent compared to the same week last year.

Searches from 1 Aug to date vs last year on Waitrose.com show people are looking for inspiration and food associated with Christmas dinner, including increased searches for the following: –

Perhaps with people rushing for the year to be over, Marks & Spencer have also seen sales of their advent calendars fly.

Sales of the festive countdown calendars are already up nearly 40 per cent on last year at M&S, as customers get ahead with their Christmas shopping and start celebrating the season earlier.

Their £5 Percy Pig Advent Calendar has also seen staggering 125 per cent more sold so far this year than in the same period last year!

With families clearly seeking out fun ways to celebrate the season, novelty and entertaining advent calendars are topping the charts so far, with M&S’ Science Museum Solar System calendar currently the second most popular choice behind Percy.

In a nod to returning traditions, M&S’ Nativity Advent Calendar is currently the third most popular choice, with sales up over 86 per cent on the same period last year.

Meanwhile, Waitrose have also seen a huge surge is seen a surge in searches for Christmas Dinner listings online.

The shop, which cut ties with Ocado earlier this year, saw visits to their Christmas listings increase 590 per cent in October.

With many preparing to host Christmas at home as just six, John Lewis has also seen a leap in demand for people getting their kitchen’s ready for the festive season.

The department stores kitchen category was sales were up 47 per cent last week vs the year before.

Andrew Staniland at Iceland Foods told FEMAIL: ‘We knew turkey sales were going to go crackers this month [October] after our analytics had spotted so many searches for them.

‘Christmas can help lift the mood of the nation, so given the year we’ve had, it’s no wonder people are starting to think about it early and get stocked up.

‘Those who may have gone out for Christmas dinner could well be eating in this year – but fear not, Iceland is well prepared and we have stock arriving every day that can be bought in store or online.’ 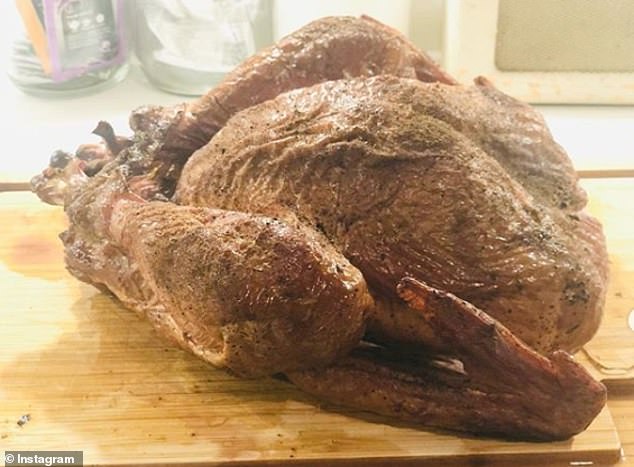 ‘Just did an order for Christmas dinner. Hopefully at least that is sorted now,’ said one.

‘Christmas dinner sorted! What ever happens lunch will be delicious,’ said another.