Sophie, Countess of Wessex swapped her wellies for heels tonight to attend an event which celebrated the life of late TV presenter Jill Dando, almost 20 years after her death.

The mother-of-two, 54, was pictured at the weekend romping around the countryside with her family and their two dogs in Windsor, having attended an Easter service on the Queen’s birthday on Sunday.

But tonight Sophie, a trustee of the Jill Dando Fund, looked a picture of elegance in a black mid-length dress with a wavy hem and matching sleeves and neckline.

She teamed this with smart pointed toe black heels and gold jewellery, sweeping her blonde locks into a bun.

Sophie, Countess of Wessex swapped her wellies for heels tonight for an event to celebrate the life of late TV presenter Jill Dando, almost 20 years after her death. Pictured with former Crimewatch presenter Nick Ross, who co-hosted with Jill

Glamorous Sophie clasped a silver sparkly clutch bag as she chatted animatedly to ex-Crimewatch presenters Nick Ross and Fiona Bruce at the event held at the Royal Society in London.

Jill Dando was also a presenter on the BBC show before she was shot outside her home in Fulham, west London, on April 26 1999.

Following her death, an institute was set up in her name at University College London, said to be the first in the world devoted to crime science.

Jill’s former co-host Nick Ross said the Jill Dando Institute of Security and Crime Science is a legacy of which those who knew and loved the presenter could all be proud. 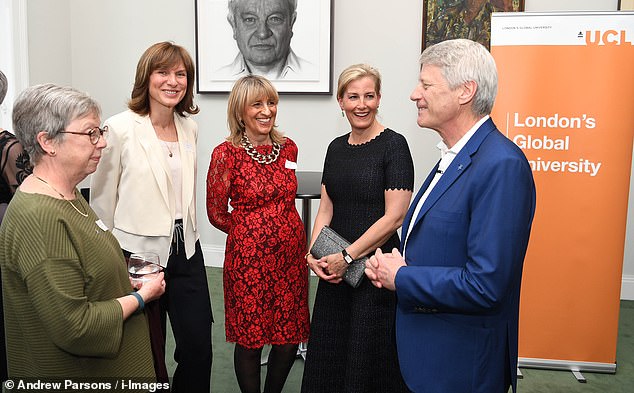 The Countess of Wessex, pictured second right with Crimewatch presenters Nick Ross (right) and Fiona Bruce (second left), joined family, close friends and colleagues of Jill Dando as they gathered at the Royal Society to celebrate her life, her achievements and her legacy at the Jill Dando Institute of Crime Science at UCL 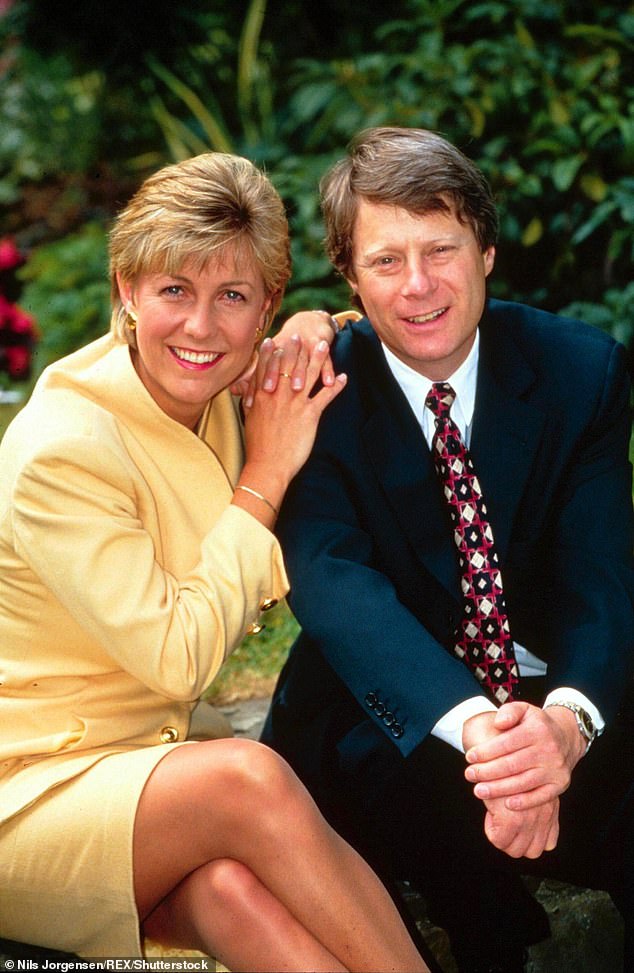 Jill Dando was also a presenter on the BBC show before she was shot outside her home in Fulham, west London, on April 26 1999. Pictured with her Crimewatch co-host Nick Ross in 1995

Speaking at the Royal Society on Wednesday evening, he said: ‘We all know there’s a blaze of publicity about Jill this month. Sadly most of the attention is about the manner of Jill’s death.

‘Tonight is about her life; it’s to celebrate her life and her remarkable legacy, a major department in a world class university that bears her name.’

He added: ‘What we all know is that Jill is still, after 20 years, hugely admired and greatly missed and she leaves behind a legacy of which all of us can be intensely proud.’ 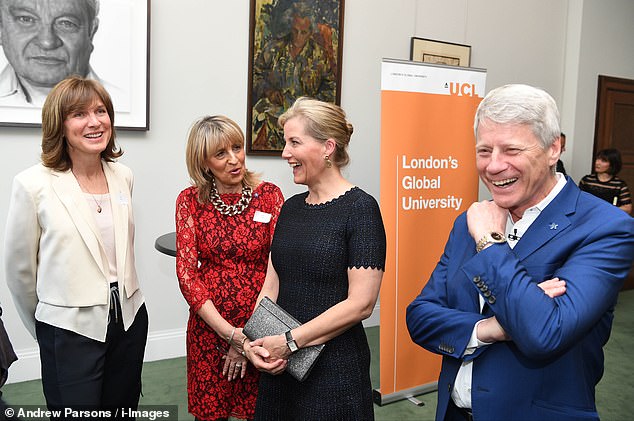 Sophie, a trustee of the Jill Dando Fund, looked a picture of elegance in a black mid-length dress with a wavy hem and matching sleeves and neckline. Pictured with Nick Ross (right), Fiona Bruce (left) and another unnamed guest

It now has more than 30 staff and dozens of researchers.

Those who had known Jill recalled fond memories of her and spoke of their pain at her loss.

He described her as a ‘beautiful, funny, intelligent but above all a genuinely nice, kind and thoughtful human being’.

Jill’s former fiance said he had initially been reluctant to speak at the event due to the emotion of the occasion, adding: ‘Jill was admired by those, many of those who had never met her. She was respected by those who worked with her and she was loved by everyone who knew her.’

Alan, who has since married and fathered two sons, said Jill had been ‘denied’ having a family of her own, something he said was ‘so unfair, so unnecessary and so pointless’.

Fiona Bruce thanked Jill for helping to show her she could have a varied career, presenting shows she loved, from the serious to the more lighthearted. 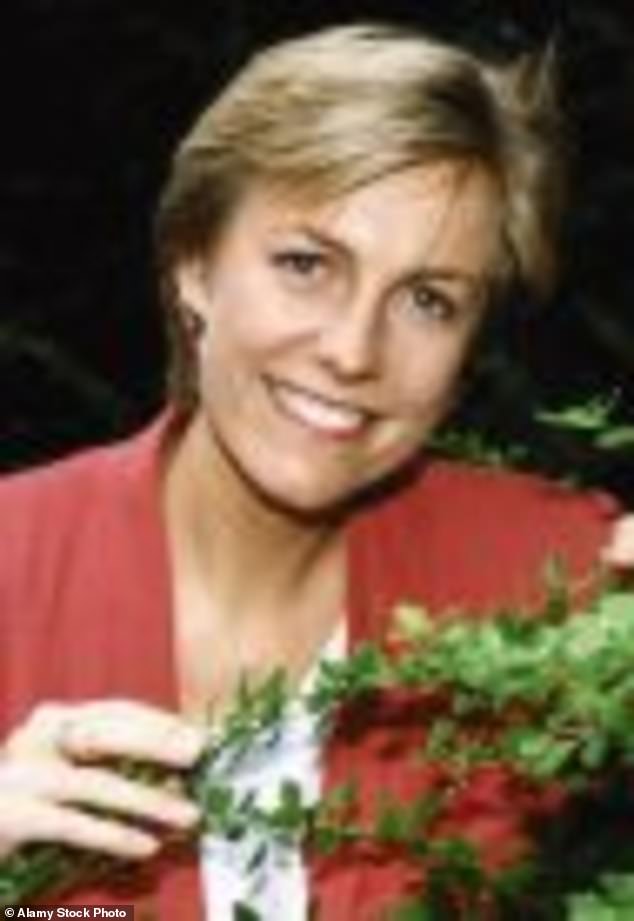 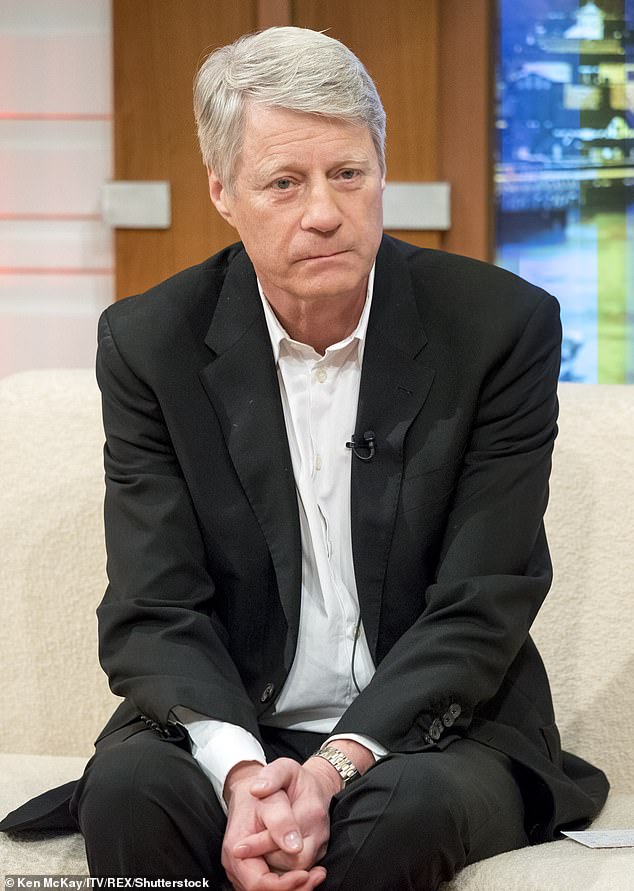 Nick Ross, pictured on Good Morning Britain, said: ‘Tonight is about (Jill’s) life; it’s to celebrate her life and her remarkable legacy, a major department in a world class university that bears her name’

She said: ‘Jill led the way for me, not just in the programmes that I did but also in how I could do them. She showed that you can do the news and you can still show your humanity, your warmth, your sense of fun.’

As her voice appeared to break with emotion, she added: ‘I think, more often than I suspect you might realise, would I be presenting the programmes that I love, combining just recently Question Time and the news, with something like the Antiques Roadshow and other programmes I’ve made over the years if it wasn’t for Jill?

‘I don’t know for sure, but I know that she helped make it possible for me. She broke the mould. And I would love to talk to her about it and get some advice and to thank her, but of course I was never able to do that, so in a small way I’m doing that now. So Jill, I owe you. Thank you.’

Barry George was arrested on suspicion of murder in 2000, one year after Jill was killed.

He was convicted and imprisoned for eight years, then acquitted and released after a retrial.