The British supermodel Rosie Huntington-Whiteley has offered a look at her beauty regime, and revealed how she has been looking after her skin and hair during the coronavirus pandemic.

The 33-year-old, who is based in Los Angeles, said she has seen this year as a good opportunity to slow down and take more time over her self-care, prioritising evenings in the bathroom ‘running a hot bath and lighting a candle’.

‘As someone who is really obsessed with interiors and who spends a lot of time in my bathroom, I’m always looking for those things to make the bathroom feel a little bit special and indulgent,’ Rosie told the Australian beauty site, Mecca.

One of her favourite beauty discoveries this year has been towels by Resorè, which Rosie described as ‘beautiful, luxurious, fast-drying and soft’. 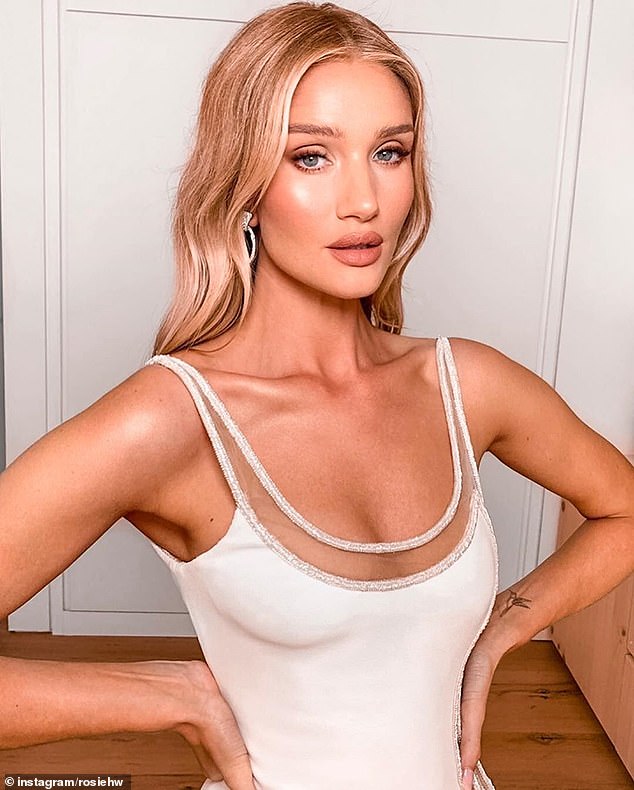 The British supermodel Rosie Huntington-Whiteley (pictured) offered a look at her beauty regime, and revealed how she has been looking after her skin and hair during the pandemic

The 33-year-old (pictured), who is based in Los Angeles, said she has seen this year as a good opportunity to slow down and take more time over her self-care

‘I never thought much about my towels before except perhaps thread count and colour,’ Rosie said.

‘But as someone with acne-prone skin, I wondered when we spend money on expensive and luxurious skincare, and towels touch our skin daily, why shouldn’t a face towel have as much importance?’

The $99 face washer set by Resorè features several game-changing ingredients including silverbac, which breaks down germs and odours, lyocell, which gently removes oil, bacteria and sebum, and rayon bamboo, which absorbs moisture and doesn’t irritate the skin.

It is made from Aegean Turkish cotton, which is naturally hypoallergenic, making it the perfect option for anyone with sensitive skin. 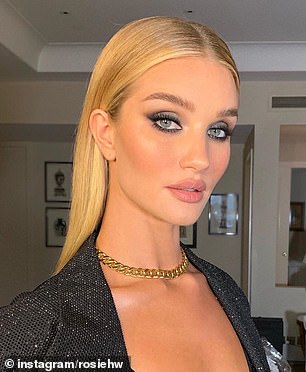 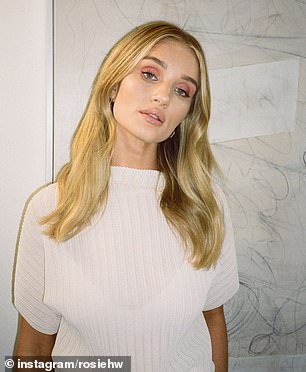 One of Rosie’s (pictured) favourite discoveries from this year is the Resorè face towels, which she said have helped with her ‘acne-prone skin’ hugely

Once she has washed her face with the face washer, Rosie said she likes to spritz her skin with the Caudalie Beauty Elixir Face Mist ($26) because it gives the skin a ‘really nice smoothing healthy glow’.

She then follows this with a home facial of some description, favouring an at-home LED light, a microneedling device and the $507 NuFace Trinity Device as some of her top recent investments.

The Trinity Device is a non-invasive device that works to define facial contours, reduce wrinkles and tighten sagging skin by stimulating deep skin tissues and muscles with gentle microcurrents.

After just five minutes of use per day, fans claim that their skin looks more youthful and radiant as a result.

‘All those beauty tools that were at the back of my cupboard were brought forward, it’s been fun,’ Rosie said. 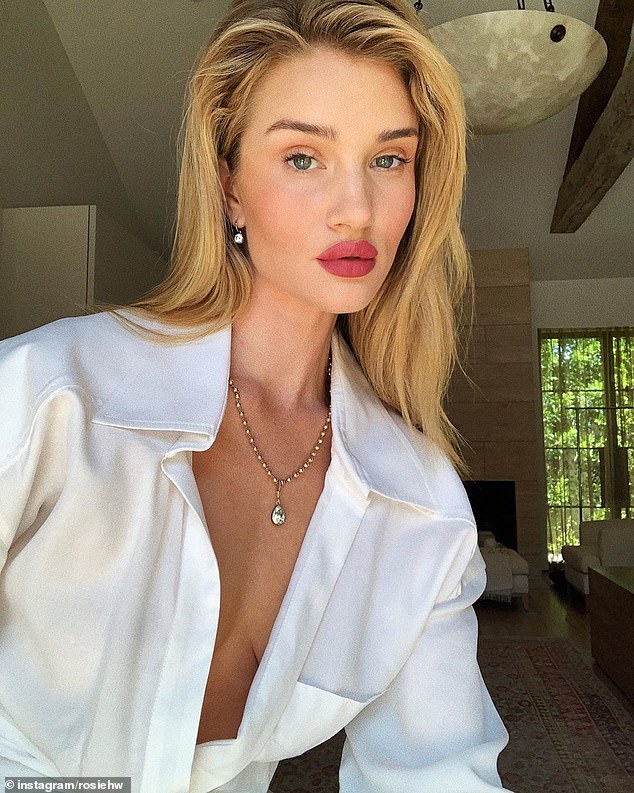 Rosie (pictured) then follows this with a home facial of some description, favouring an at-home LED light, a microneedling device and the $507 NuFace Trinity Device 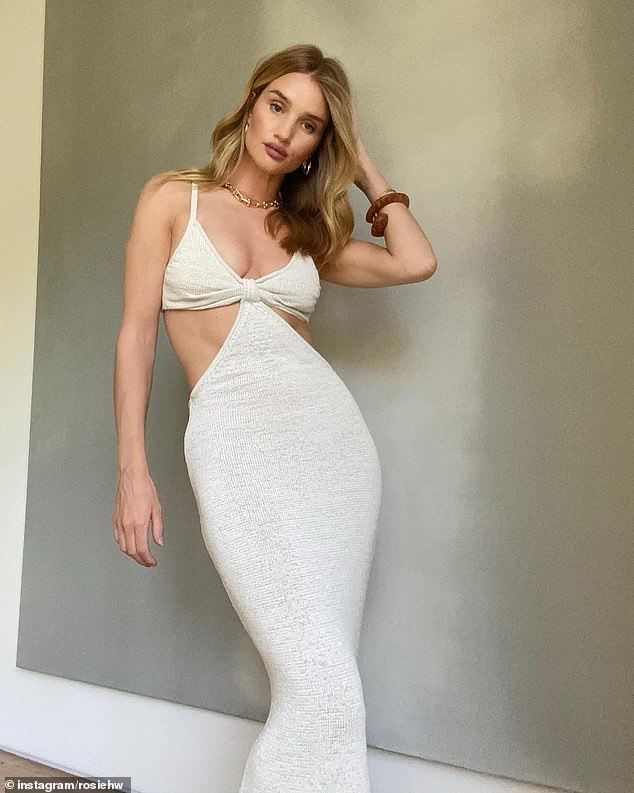 Elsewhere in her regime, the 33-year-old model revealed to Vogue that she uses the Erborian Glow Creme Illuminating Face Cream, which she said gives the ‘baby skin effect’.

Rosie’s favorite tool to use doesn’t come in the form of a brush – it’s her hands which she says is quick and easy.

‘I like the way the warmth of your hand kind of diffuses the product into your face in a more natural way and I feel like you can just correct what you’re doing much much easier,’ Rosie said.

She also loves the Australian brand Lanolips’s lip balm (from $14.95).

‘I do love Lanolips! That Banana Balm Lip Sheen 3-in-1 is at the bottom of every handbag of mine,’ Rosie said.

1. Face mist – The first step in Rosie’s skincare routine is a face mist and she likes to spritz the Caudalie Beauty Elixir because it ‘gives a really nice healthy glow.’ 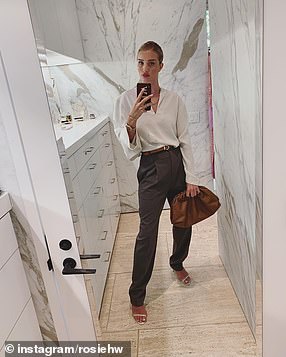 2. Primer – Next she uses a primer from Korean-French brand Erborian and likes the Glow Creme Illuminating Face Cream which she says ‘gives this amazing glowy feel.’

3. BB Cream – After that she uses another product from the same brand but this time she applies Erborian BB Creme au Ginseng which she describes as giving the ‘baby skin effect.’

4. Lip Balm – The next product she uses is the Glossier Balm Dotcom which she confesses is her favorite lip balm out at the moment.

5. Concealer – Next, she uses a little bit of Rosie for Autograph Amazing Skin Secret Concealer and dabs a few dots under and around her eyes as well as up and around the corners of her nose.

6. Brow gel – After concealer Rosie moves on to her eyebrows which she admitted she’s ‘really OCD’ about and she uses Glossier Boy Brow.

7. Bronzer – Following her brows she uses Chanel Les Beiges Healthy Glow Luminous Colour and pops a little into the crease of her eyelid for a natural contour.

8. Eyelash curler – Next up, she curls her lashes and even went so far to say, ‘I don’t believe that you can do mascara without curling your lashes’.

9. Mascara – Once her lashes are curled she applies mascara to her top and bottom lashes which she says opens up her eyes more.

10. Eyeshadow – While Rosie admitted she doesn’t usually wear eyeshadow during the day, she recently discovered Jillian Dempsey’s Lid Tints which she’s ‘obsessed with’ and dabs it on her lids.

11. Blusher – Next she applies blush using the Rosie for Autograph Lip and Cheek Color Stick which she loves because of how glowy it comes out.

12. Highlighter – After blush she follows up with highlighter from RMS Beauty  and applies it to the top of her cheekbones, under the brow, on the cupid’s bow and a little down the center of her nose.

13. Lipliner and Lipstick – Rosie swears by lipliner to get the perfect pout and once her lips are lined she applies a few dabs of Glossier’s Generation G lipstick in a mauve shade.

15. Powder – Lastly, she uses a tinted foundation powder to give her some extra coverage and she applies it to her chin.