Elizabeth Jackson, 43, from Finsbury Park, London, featured in last night’s Big Body Squad on Channel 5, which follows carers and medical staff who look after some of Britain’s biggest people.

Weighting 27 stone, Elizabeth needed hospital treatment for the skin condition cellulitis, but could not exit her first floor flat by herself.

A four-strong team of paramedics had to use a Mediwrap Heavy Duty Rescue Bag, made from ultra strong woven material, which can accommodate up to 300 kg.

However, viewers found it hard to sympathise with the woman and other people featured on the show with some arguing that their conditions are preventable. 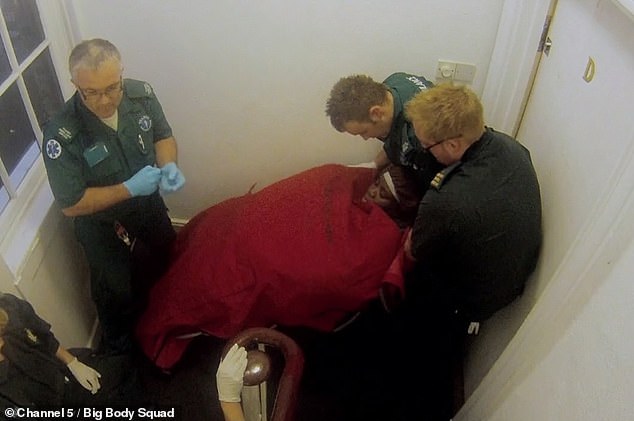 Each decision counted during the operation, which had to be performed quickly and safely in the uneven staircase

‘I can’t work it out. These folks talking about these problems like they aren’t completely preventable,’ one viewer wrote.

Elizabeth needed treatment for cellulitis, an infection of the deeper layers of the skin. and underlying tissues that can lead to blood poisoning if left untreated, with obese patients at an increased risk.

When she called 999 for help, paramedics specialising in bariatrics – the care of obese patients or obesity-related issues – teamed up with the London Ambulance Service (LAS) to help her get to hospital. 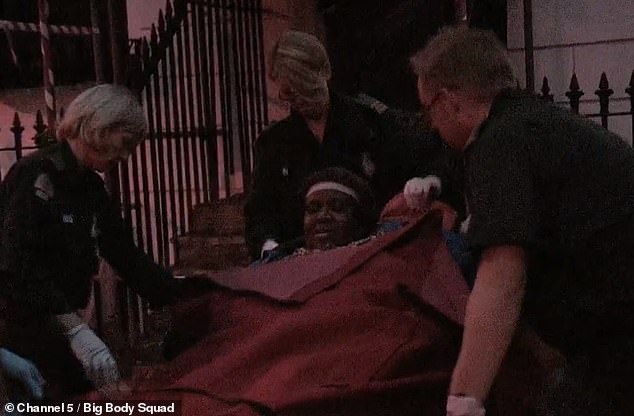 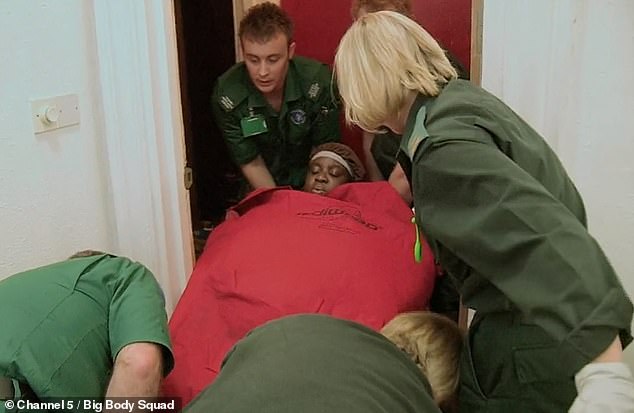 William Bishop, from Thames Ambulance Services, was leading the operation.

‘It’s quite a dangerous staircase we got to bring her down. It’s quite wide but it’s a bit uneven, he said.

As the stairs were too narrow to accommodate a gurney, the team had to resort to using a carry chair and a reinforced bag in order to carry Elizabeth to the ground floor level. 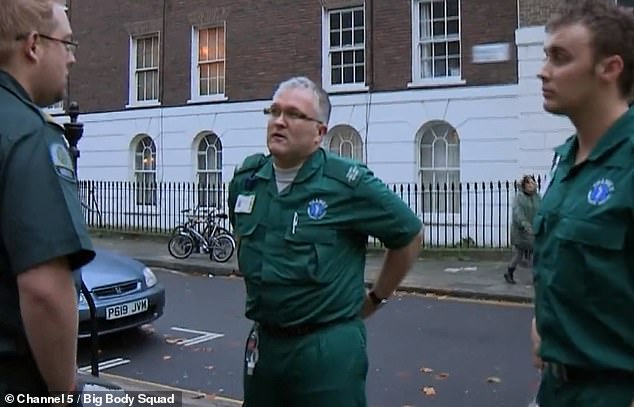 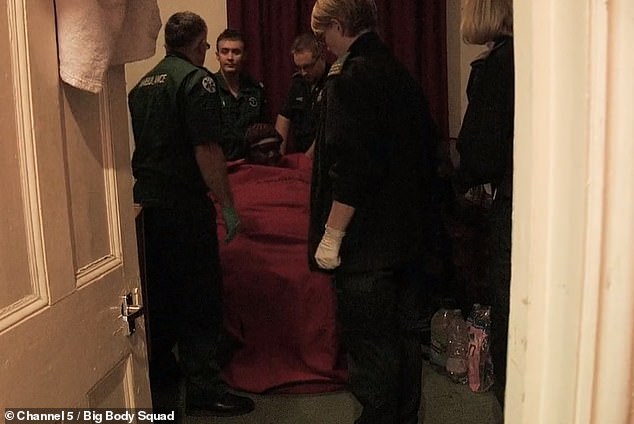 The team put Elizabeth in a bag in order to protect her sore legs during the move, as they were very painful

‘I’d like to put you in that bag,’ William told Elizabeth as the team tried to put together a plan of action.

‘Because we can hold on to the bag as well as the chair rather than grabbing on to you.’

The team had to manoeuvre Elizabeth carefully as they went down the narrow and twisted staircase of the town house. 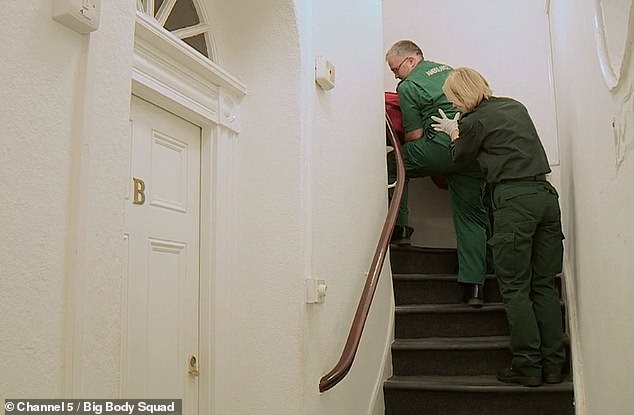 The high-pressure job had to be performed swiftly and with extra care, as Elizabeth was in pain due to her skin infection.

At one point, the woman whimpered when her aching leg got stuck against the wall, as the team of four paramedics apologised profusely.

On top of ensuring Elizabeth’s safety, the crew had to care for their own, as carrying Elizabeth’s 27 stone to the ground floor equaled the weight of three people.

As the team stopped to figure out their next move, Tracey, one of the paramedics made sure to find the best way to maneuver Elizabeth downstairs.

It took several attempts to finally get the shaken woman down the stairs, where she would be lifted onto a gurney and loaded in the ambulance. 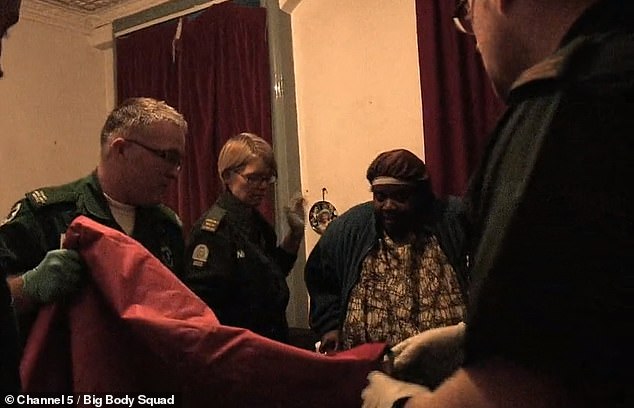 Elizabeth called 999 after the pain in her legs had become unbearable, and she had to be carried to the hospital urgently

The rare condition causes Andrew’s arms and legs to swell out of proportion. At the time of the documentary, his left foot was particularly impaired, and walking anywhere was a painful challenge.

Andrew was transported by ambulance in order to acquire a pair of specially crafted shoes that would help him recover some sort of mobility, and achieve a more active lifestyle.

The pair retailed at £400, were made to measure and specifically designed to keep the feet free of moisture and comfortable. 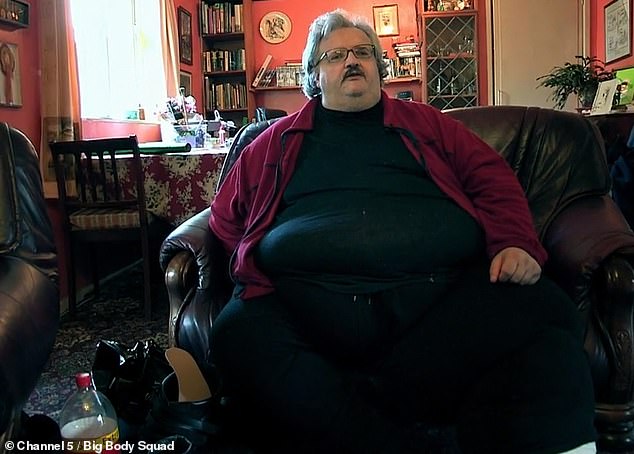 Andrew Elderkin, a 30 stone man, explained he suffered from elephantiasis and needed a new pair of shoes

Demand has increased by 20 percent in the last five year, as obesity and diabetes-related heath issues plagued the UK.

‘Hopefully I can up more, and try to walk more,’ Andrew said. ‘If I can go out of that hospital with that pair of shoes, it’s the proudest day of my life.’

‘Fluid flows down to the bottom of my leg, and there’s not enough things to bring the fluid back up. It goes from my groin down to my toes and it’s very painful,’ he explained, 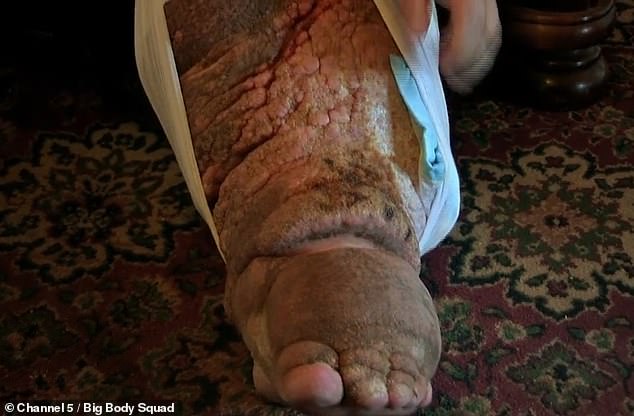 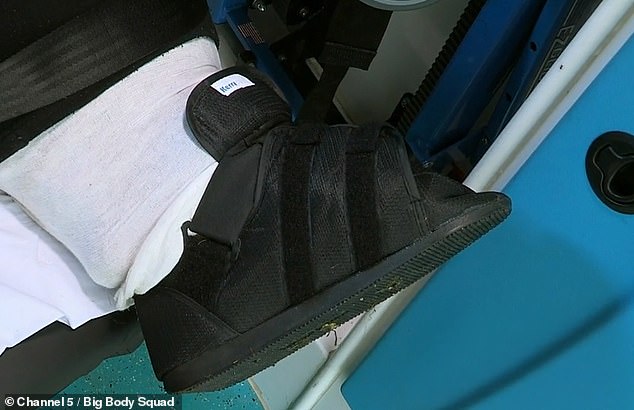 In order to help with his mobility, Andrew needed a specially crafted pair of shoes which cost £400

Due to the accumulating fluid in his legs, his skin and underlying tissue hardened and split.

It had taken Andrew a year to get his new pair of shoe, and the documentary followed him on the day of his final fitting. 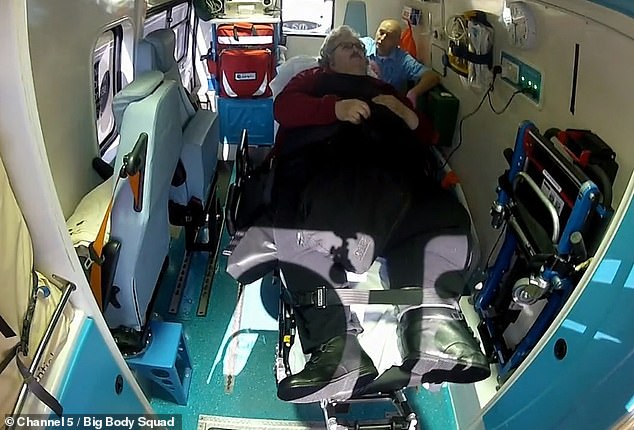 Andrew, whose mobility was very limited, had to be transported via ambulance in order to attend his final shoe fitting

‘That’s a long way, but with a foot like mine, it’s very hard to walking into a shop to buy a pair of shoes,’ he added.

The man revealed the pain was so terrible he had repeatedly suggested extreme ways of getting some relief:

‘I’ve been asking them to cut my leg off and I know it’s very drastic thing, they won’t do it because my toes are pink and I still get life in my feet, so I have to bear with pain,’ he said.

Andrew’s final fitting was a success, and the 30 stone man proudly walked the short distance from his wheelchair to the ambulance without any help.

‘Its so much better because now I’m going to be able to walk netter without worrying about slipping. As they have grip on them now I’m not going to feel like I’m gonna fall.’

He thanked the paramedics for their repeated help.

‘They are brilliant, I love them all, they are our mean of escape. Without them, we’d be completely lost.’

At the end of the episode, we learned that Andrew indeed led a more active lifestyle thanks to his shoes.

Watch Big Body Squad on My5.