A terminal cancer patient who hosted his own wake has fulfilled his dying wish of marrying his ‘rock’.

Factory supervisor Chris Clark, 43, from Hebburn in Tyne and Wear, who has just weeks to live after being diagnosed with bowel cancer last year, held his ‘awake wake’ less than a fortnight ago so he could say a proper goodbye to loved ones.

Just days after the inspirational event, he married his girlfriend of more than a year Claire, 46, at a beautiful but heartbreaking ceremony on Tuesday. 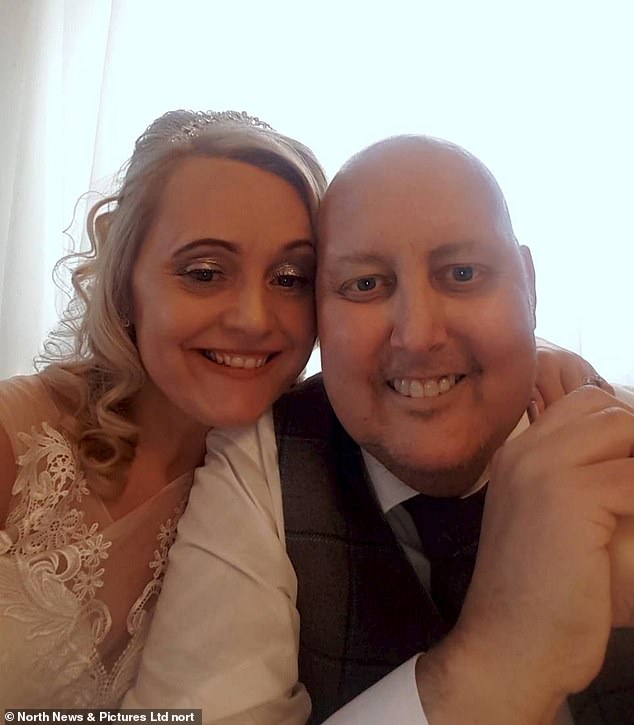 Factory supervisor Chris Clark (pictured with his wife), 43, who has just weeks to live after being diagnosed with bowel cancer last year, has fulfilled his dying wish of marrying his ‘rock’ 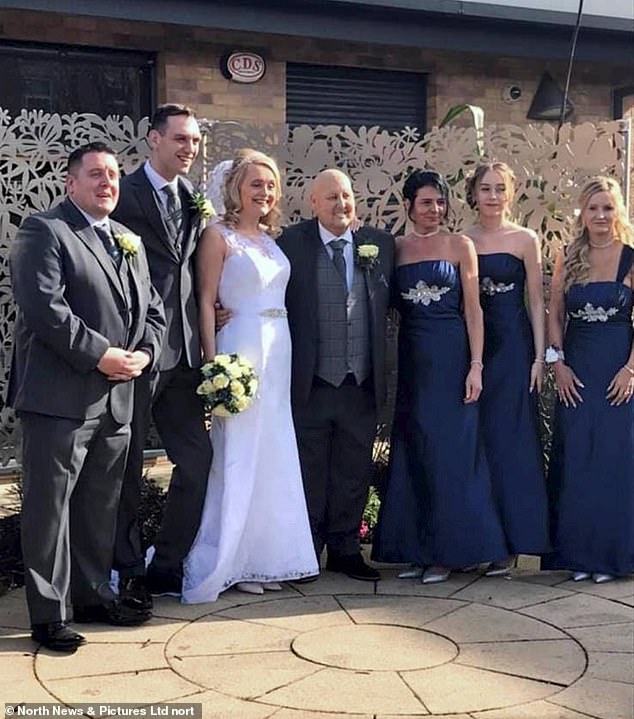 Chris and Claire’s had their first dance as a married couple to A Thousand Years by Christina Perri, and were captured on video in a loving embrace while a slideshow of pictures of the couple played behind them.

They were supported by tearful family and friends, who have come to call Chris ‘Braveheart’ as a result of his courage throughout his illness, during which he has fought multiple episodes of deadly sepsis.

Claire, from Sunderland, has now expressed her pride in her new husband.

She said: ‘It was an amazing and emotional day with our loved ones, who laughed and cried with us. 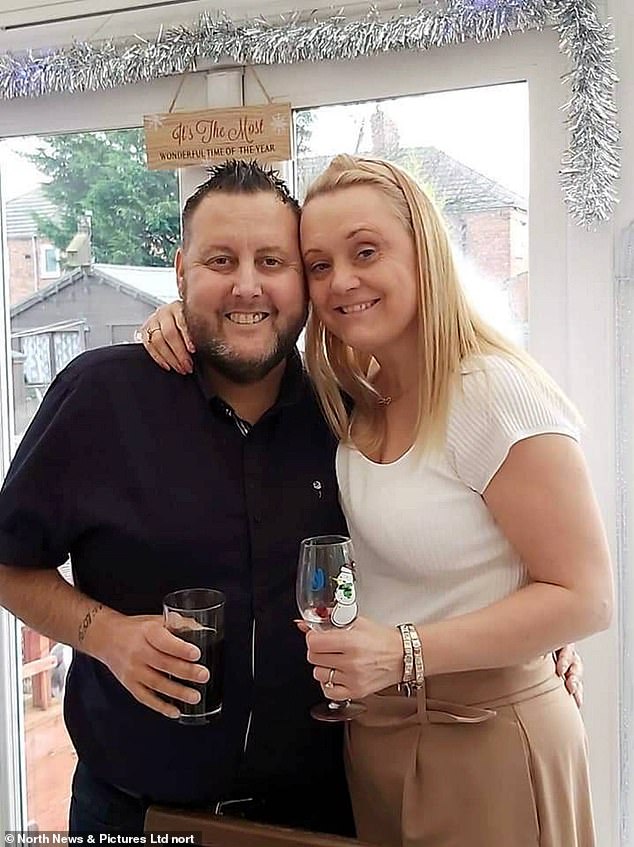 Just days after the inspirational event, Chris, from Hebburn in Tyne and Wear, married his girlfriend of more than a year Claire (pictured together), 46, at a beautiful but heartbreaking ceremony on Tuesday

What is bowel cancer and what are the symptoms?

Bowel cancer is a general term for cancer that begins in the large bowel. Depending on where the cancer starts, bowel cancer is sometimes called colon or rectal cancer.

Bowel cancer is one of the most common types of cancer diagnosed in the UK. Most people diagnosed with it are over the age of 60.

The 3 main symptoms of bowel cancer are:

Most people with these symptoms do not have bowel cancer. Other health problems can cause similar symptoms. For example:

These symptoms should be taken more seriously as you get older and when they persist despite simple treatments.

‘We were married at South Shields registry office and then went to the Hedworth Hall for the meal and party.

‘I am so proud of Chris, it was an emotional and exhausting day and we were there into the early evening, we left at around 8.30pm. We can’t thank everyone enough for their love and support.

‘Our wedding day was organised at such short notice and we would like to thank Deborah Roberts from Cancer Connections and Lisa Nightingale from the Hedworth Hall, among many, many other people, who helped organise such a perfect day for us both.’

Chris, who walked up the aisle to the theme tune from Braveheart the movie to wait for his bride, paid an emotional tribute to his new wife and called her ‘stunning,’ and ‘my rock’.

He added: ‘Behind every good man is a good woman. Claire exceeds all expectations.

‘To do what she has done and put up with me for the past year, she deserves an award.’

Chris came up with the idea of attending his own wake after he was told he had just a matter of weeks to live in February.

During the emotional gathering at the Lord Nelson pub in Jarrow, in Tyne and Wear, more than £7,000 was raised, through raffles and donations, for Cancer Connections, who have supported Chris through his devastating plight.

He said: ‘I started thinking, “Why should I be dead for my wake and not see people?”. People would come who I haven’t seen for years, so why shouldn’t I get to see them?

‘The people I love, my friends and family, would all be together and I would actually be there to say goodbye.

‘I don’t want people grieving. Those close to me have gone through every step with me since my diagnosis and the wake has given them something to focus on as well.’

Chris, who works for UTS Engineering Company in Jarrow said friends and former colleagues travelled from across the UK and abroad for his wake.

Chris added: ‘Claire’s my rock who puts up with my mood swings. I’d be lost without her. 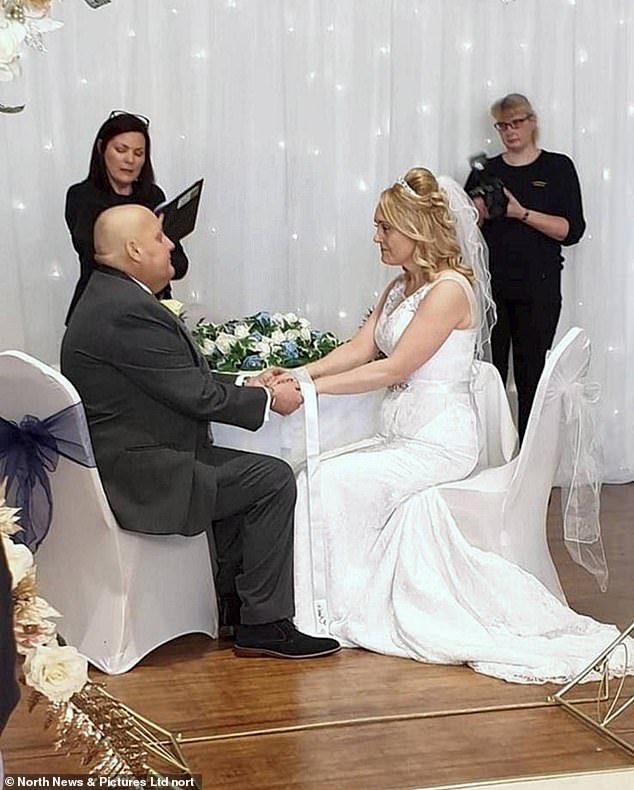 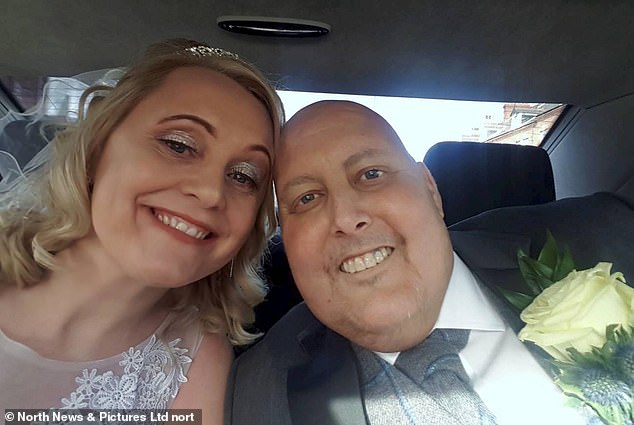 They were supported by tearful family and friends, who have come to call Chris (pictured with his wife) ‘Braveheart’ as a result of his courage throughout his illness

‘People have been so generous to me since my diagnosis. Friends, family and my employers have helped non stop and there was a fundraiser to help me still enjoy life after I was diagnosed.

‘Cancer Connections has been a lifeline, they help with counselling, money advice, basically anything you need. The Macmillan nurses have also been outstanding.

He added: ‘I want to urge people to get checked. If you have any symptoms of anything at all then get help straight away, whether it’s physical health or mental health, don’t just leave it to chance, get it checked out.’

Chris raised money for Cancer Connections at the wake and donations can be made at his Just Giving page. 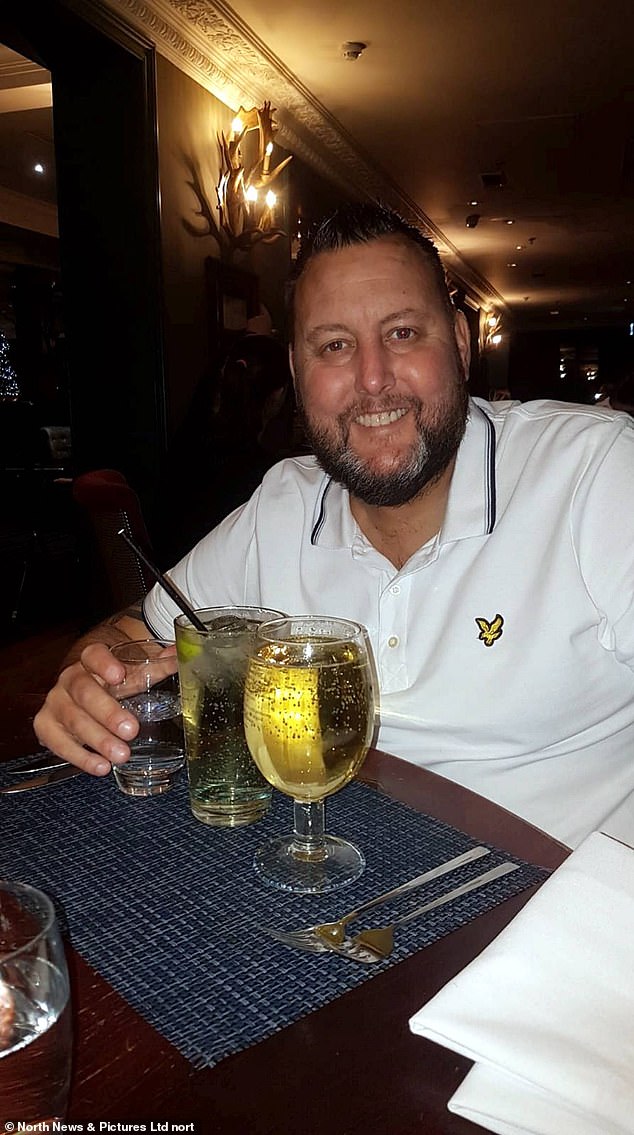 During his hospital stays, Chris penned poetry about his journey, including this one: ‘Gently as the wind caresses the sea, I watch aimlessly as the waves progress.

‘Wind blowing on a solitary tree, branches breaking leaves a mess. I sit in comfort in my car, anguish, anger thoughts afar.

‘Why is life so unfair? I love my life I duelly care. No second chance or any respite, just hanging on tight preparing to fight.

‘A glimmer of hope or a change in luck, is my body up for this ruck? Aspirations and dreams amiss, praying for change that would be bliss.

‘Raw emotion and hurt is deep, head’s a rollercoaster I pray for sleep. Silent thoughts I’m so confused, Cancer’s laughing it’s so amused.

‘Another victim I’ll become, I’l gain my wings and join my mum…. Days or weeks time will tell, I’ve went through an emotional hell.

‘I’m dreading death and my fatal breath. My love, my family my friends I will leave, please celebrate my life and do not grieve.’