The 11 words most commonly misspelled in Google searches have been revealed – and they are less complicated than you might think.

‘Separate’ is the word most frequently entered incorrectly into the search engine, with the misspelling ‘seperate’ entered 92,000 times in the last month alone.

‘Questionnaire’ appears at number three on the list with ‘potato’ – often wrongly spelled with an extra ‘e’ on the end – in fourth.

The 10 most commonly misspelled words in Google searches and their most frequently occurring misspellings (British English).

The data, commissioned by UK-based firm The Knowledge Academy, is based on Google searches carried out over the last month by users from around the world. It also reveals the most common incorrect spellings for each word.

Words like ’embarrass’ (seventh place) and ‘unnecessary’ (ninth) appear on the list due to their difficult-to-remember single and repeated letters, while the ‘sc’ in ‘conscience’ (eighth) often trips people up. 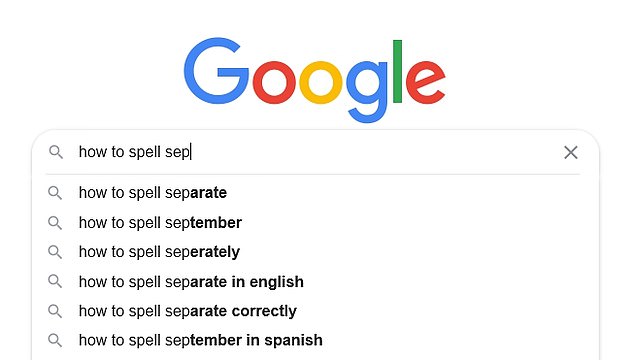 ‘Separate’ is the word most frequently entered incorrectly into the search engine, with the misspelling ‘seperate’ entered 92,000 times in the last month alone

Others like ‘bureaucracy’ (tenth) and ‘manoeuvre’ (eleventh) are tricky to spell because of the sequence of the vowels in the middle of the word.

Controversially, ‘diarrhoea’ is included on the list as the fifth most commonly misspelled word, while the accepted American English spelling of the word, ‘diarrhea’, is considered one of the incorrect variants.

Rounding out the 11-strong list is ‘definitely’ which has common misspellings including ‘definately’, ‘definatly’ and ‘definitley’.

㆗watchtvseries㆙ Call Me by Your Name Movie Online