Today’s cookery segment on This Morning was a little more hair-raising than anticipated, when a cook failed to tie back her long locks.

Cooking from her farm in Yorkshire, Alison O’Neil was attempting to show Phillip Schofield and Holly Willoughby how to make the perfect Victoria Sponge Cake after the Royal Family shared a recipe last week.

However, viewers were distracted by her long locks, which hung over her shoulders, and hovered over her mixing bowls as she showed how the preparations should come together.

Many lost their appetite for cake, observing the practice perhaps was unhygienic, and that her hair should have been tied back. 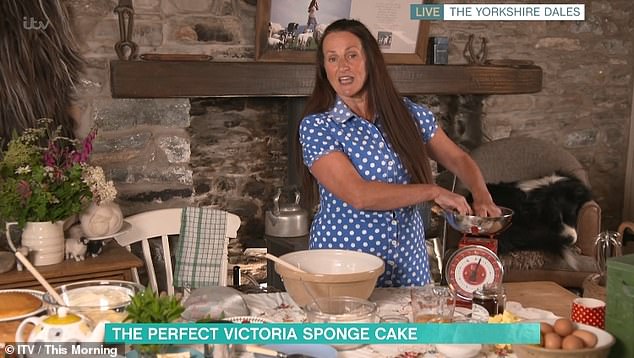 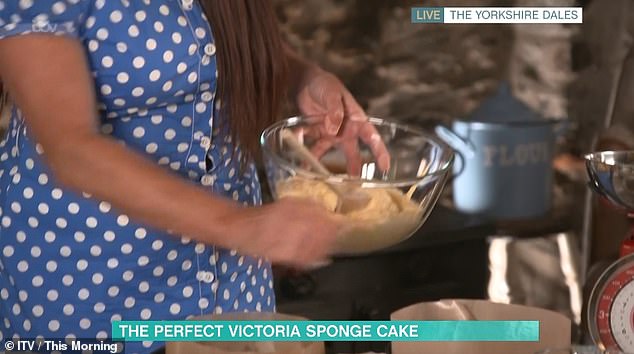 As Alison mixed her ingredients, viewers grew uncomfortable at how close her hair got to the food

Alison, who was wearing a white and blue polka dot dress, had all ingredients for her cake laid on her table as she joined Phil and Holly for the cooking segment this morning.

She let her hair fall loose over her shoulders, and the long mane reached to above her elbows, which were bare.

And as Alisan went on with her baking, her hair got closer and closer to the mix.

Reaching for the bowls and letting them rest against her side to mix the concoction better, Alison’s hair could be seen hovering above the mixture, making many worried strands of her hair would end in the cake. 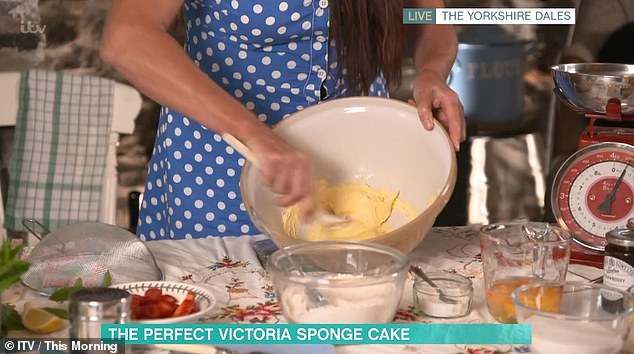 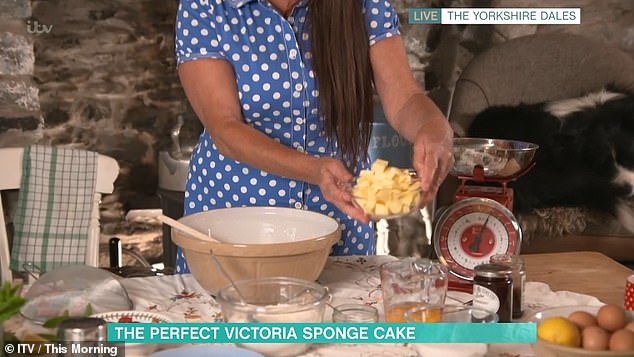 When Alison proudly showed her butter cubes to the camera during the bake segment, many felt she should have tied her hair

Viewers started to get uncomfortable with her lengthy locks  as she proudly lifted the bowls, filled with cream, eggs and flour, to show the mixture to the camera.

‘Victoria sponge with the secret ingredient that is her hair,’ one said.

‘Her hair’s off in the mixing bowl,’ one pointed out.

‘Oh gosh, I was a bit grossed out by all that hair being so close to the mixing bowl,’ another wrote.

‘That sponge looked delicious. But she should have tied her hair up or back instead of letting it practically go in cake mixture,’ said another.

‘Eh, no thanks, hair cake not my favourite,’ joked another.

The chef also raised eyebrows at the start of the segment when she weighed her whole eggs, in their shells, to have the exact measurements for the recipe. 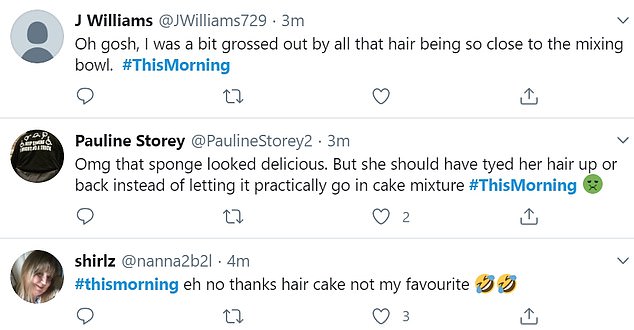