LinkedIn is a place where professionals from all around the world can connect, but that’s not always how it’s used.

A hilarious online gallery, collated by BoredPanda, of the Twitter account Cr** on LinkedIn has revealed some of the bizarre posts employees from around the world have shared to their page on the platform.

From a man who insists you ‘don’t need a degree if you have a Ferrari’ and a woman who inexplicably shared a photograph of herself posing in a field, some users aren’t exactly being professional on the website.

Examples also include several nonsensical motivational quotes, one made from balloons,  and a man who says he was inspired by a bug. 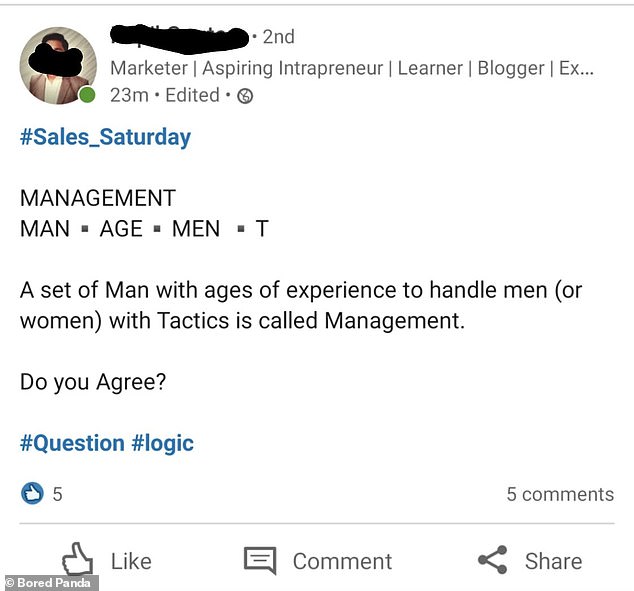 Bored Panda rounded up a selection of hilarious posts spotted on LinkedIn, including one users attempt at redefining the term ‘management’ 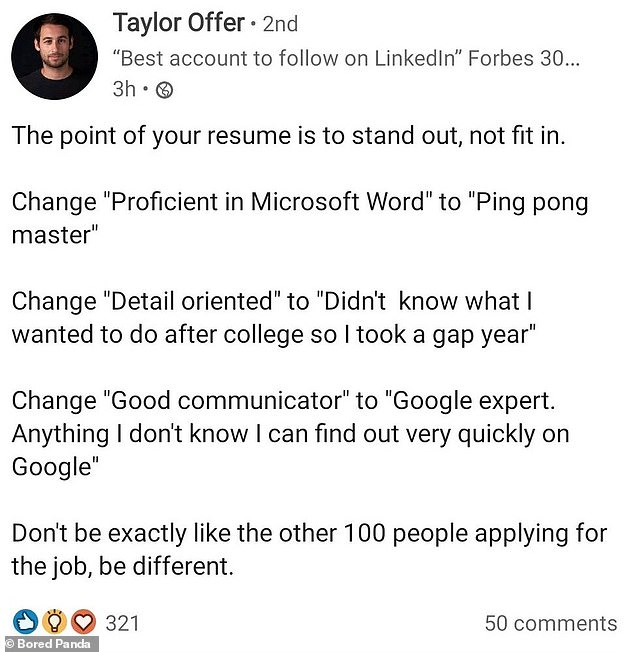 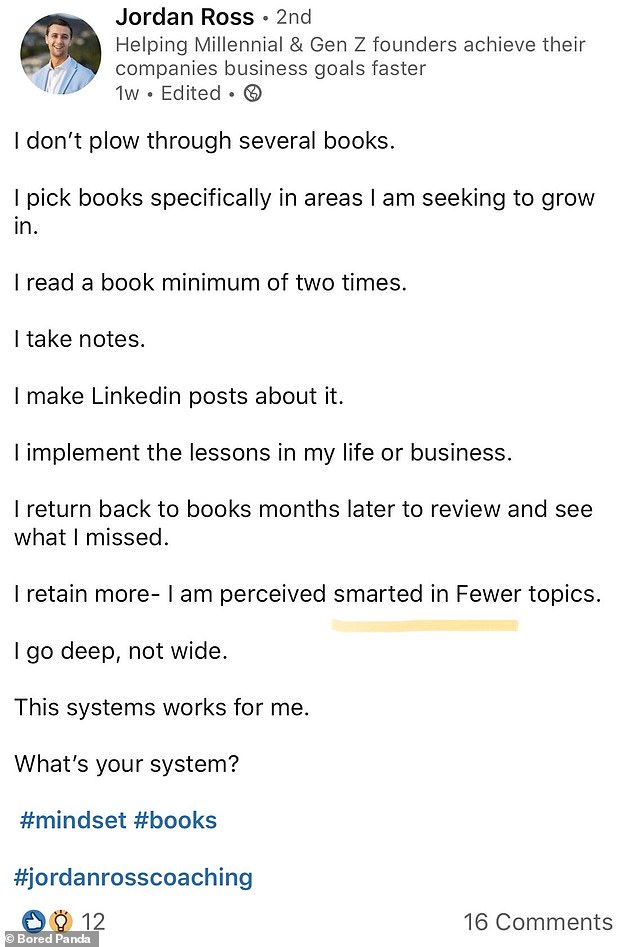 Me, me, me! Another individual shared a humble brag of how he’s able to expand his knowledge across a range of topics by reading 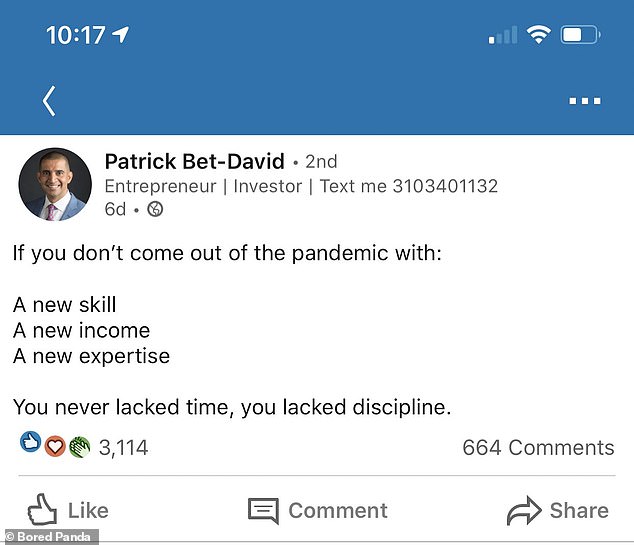 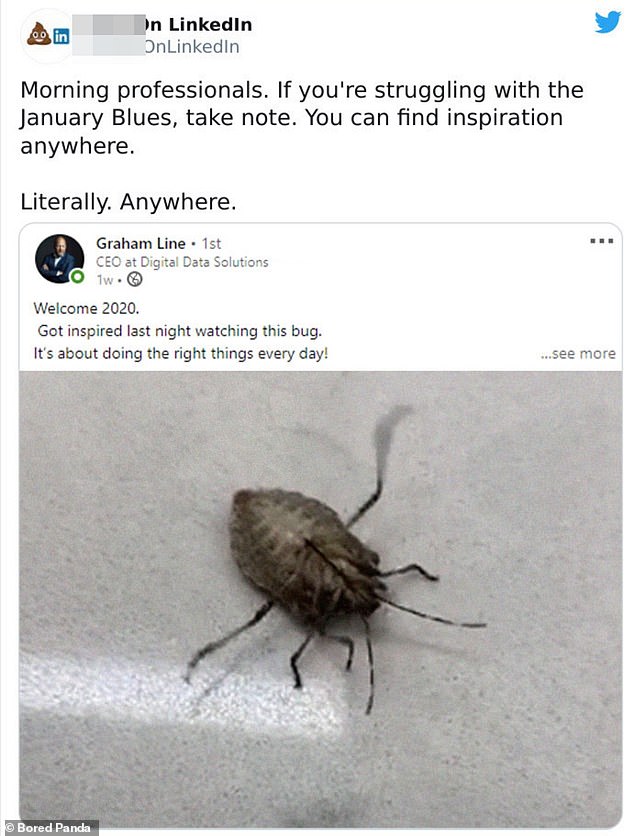 What the bug! Graham, from the UK, revealed that his inspiration came in the form of an insect that crawled across his desk 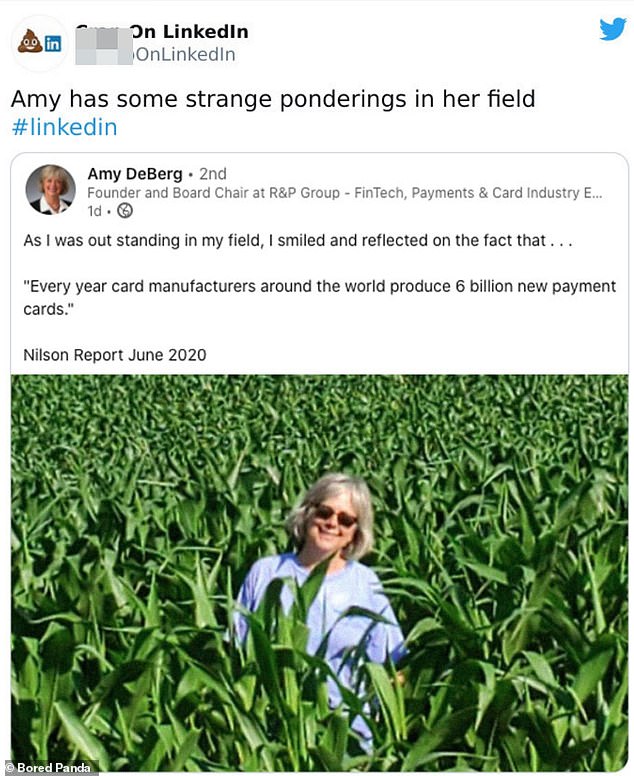 Rather far afield! Amy, from Dakota, shared an inspirational quote, accompanied with a picture of herself in a field with no explanation 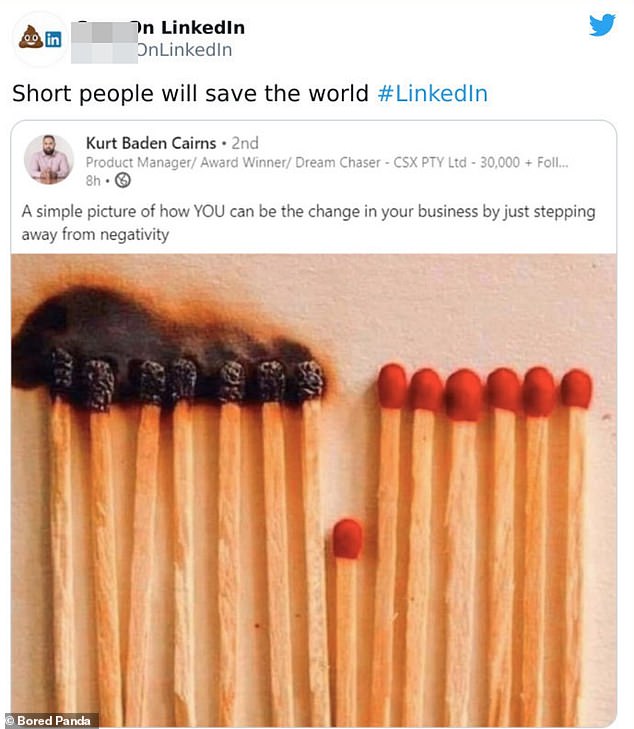 What exactly does that mean? Kurt shared a ‘simple picture’ of how to improve your performance in business 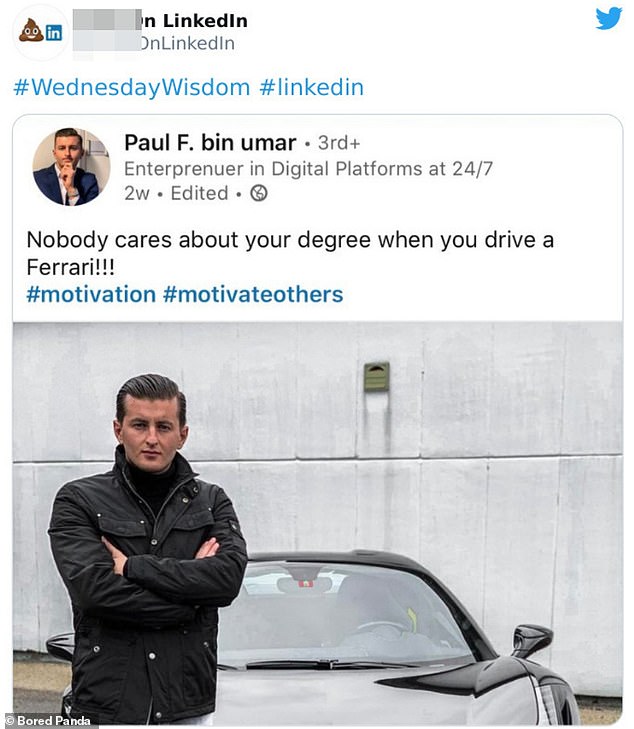 Great advice! Paul, from the UK, boasted about his sports car and told people that nobody cares about his degree 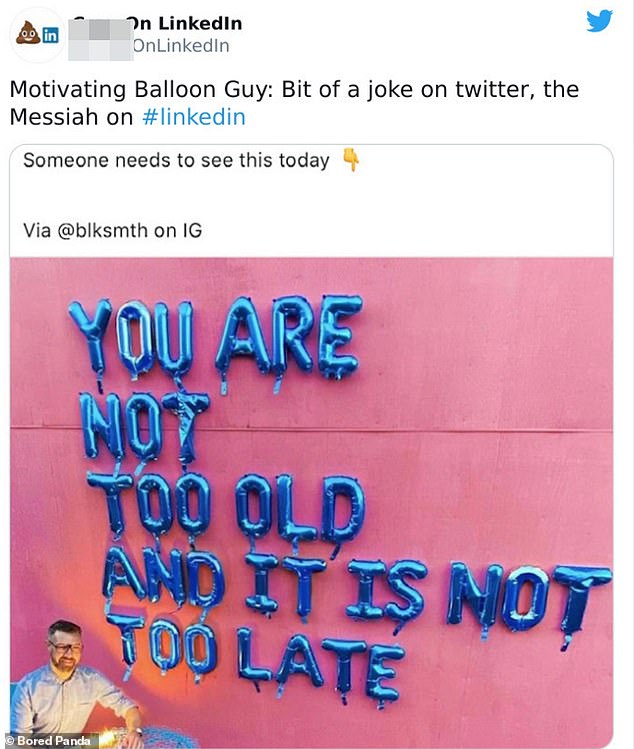 Great advice! This user shared a motivational quote, made from balloons and insisted that employees ‘needed’ to see the message today 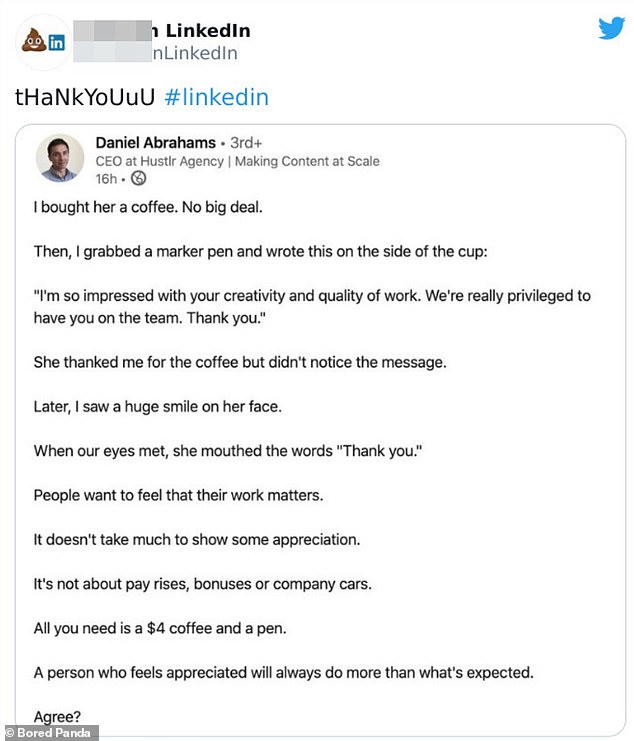 A true inspiration! This boss, from Sydney, was very proud of himself for writing a kind message on the side of one of his employees coffee cups 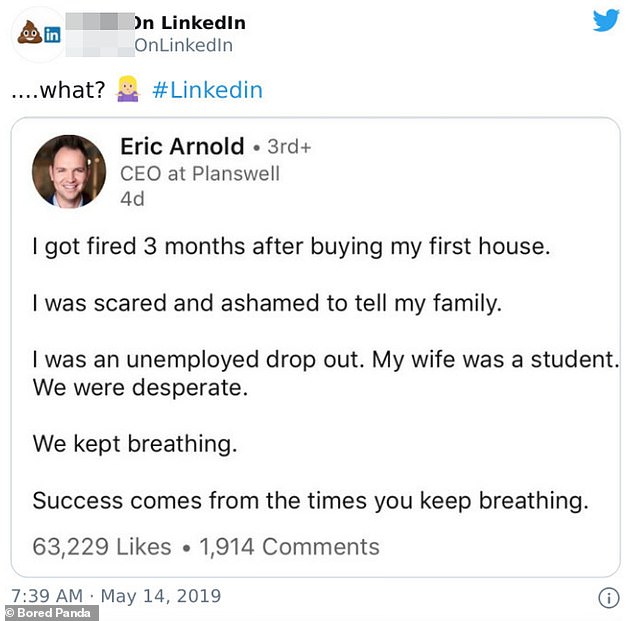 We’ll take that on board! Eric, from Canada, gave a motivational speech that wasn’t too clear 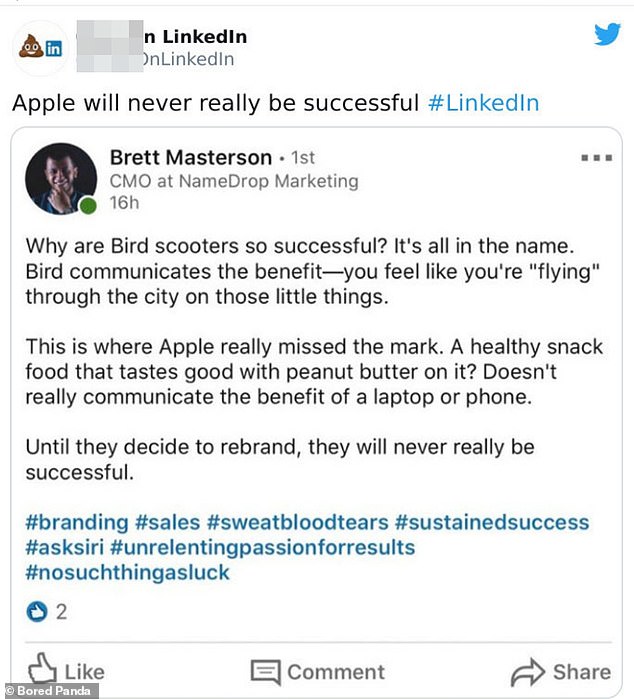 Not sure about that one! Brett, from the US, claimed that Apple will never truly be successful and ‘really missed the mark’ on their name 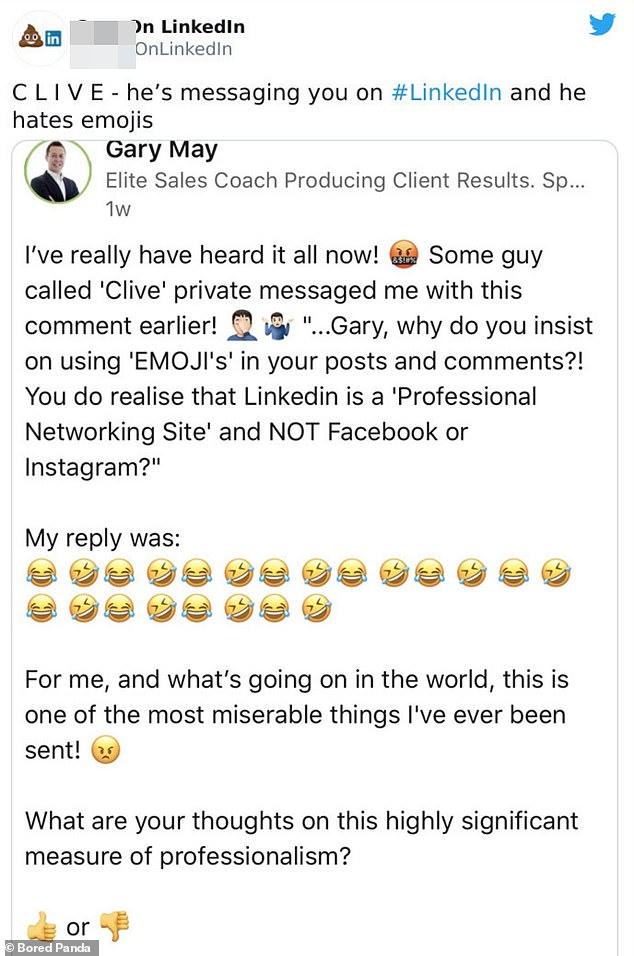 Enough of the emojis Gary! This user got very angry after he was told by a colleague to stop using so many emojis 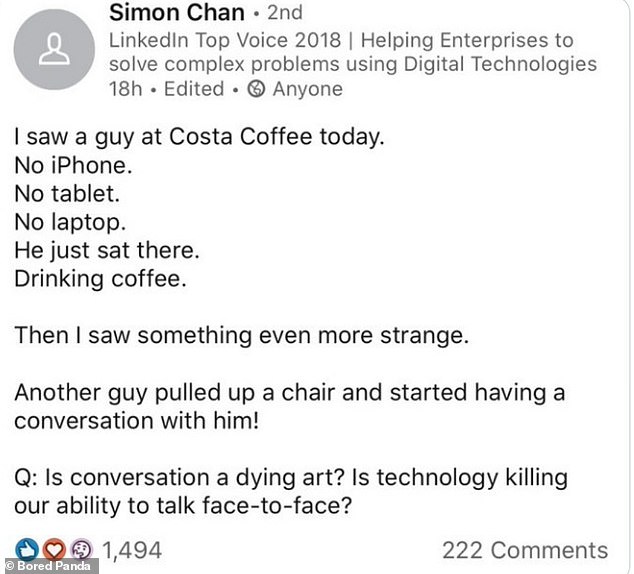 Deep! LinkedIn user Simon, based at an undisclosed location, shared his profound thoughts on watching someone have a coffee 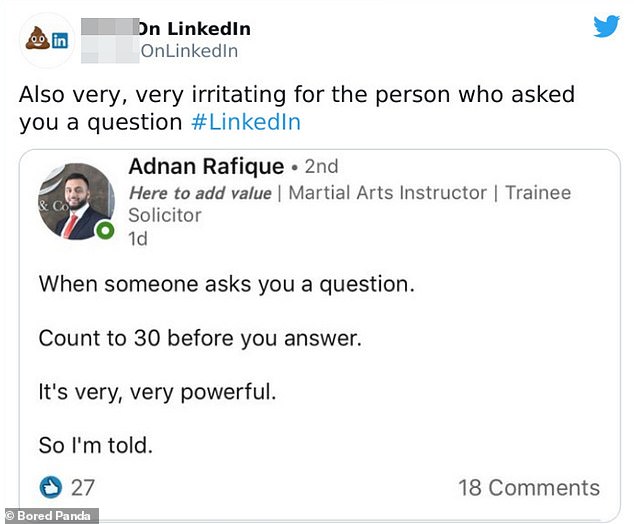 We haven’t got all day! Adnan, from London, advised taking 30 seconds to answer a question when someone asks you