A wealthy man used to the finer things in life has to rough it up on a farm after swapping his lavish holiday with a skint couple’s budget vacation on Rich Holiday, Poor Holiday.

In tonight’s episode of the Channel 5 show, Ton, who works in PR, and Andrew, a marketing executive for a luxury perfume brand, both from Surrey Keys in London, learn to live with compost loos and scooping up hen faeces during a week-long stay on a volunteer farm in Shropshire.

The big spenders admit that they often spent up to £3,000 on accommodation and another £5,000 on entertainment and food when they travel abroad to exclusive locations.

So they’re in for a shock when they swap five star hotels for the holiday of parents-of-two Dessie and Hayley, from Bexley, who are used to spending a maximum of £600 on the very rare vacations they allow themselves to take.

The couple admit in the programme, which was filmed in the summer of 2020, that the coronavirus pandemic has left them struggling to make ends meet, with Dessie, a musician, making no money due to lack of gigs, and Hayley having to take on an admin job to make up for the loss of income.

While Dessie and Hayley live the high life during a Croatian holiday worth £30,870, Ton, who says he likes to have two to three showers a day, is taken aback by the farm’s rustic appearance and its toilet situation. 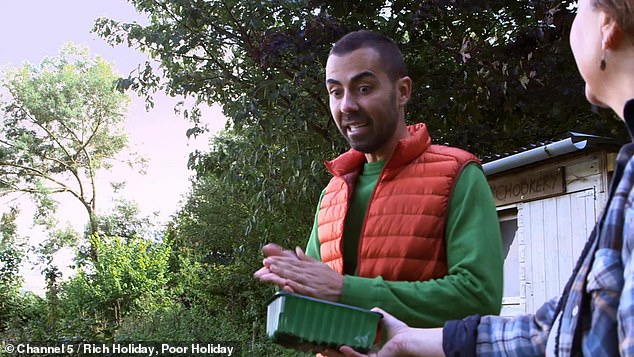 Ton, a PR from Surrey Keys in London and his best friend Andrew, a marketing executive for a luxury perfume brand, swap lavish holidays for a stay on a working farm in Shropshire on tonight’s episode of Rich Holiday, Poor Holiday 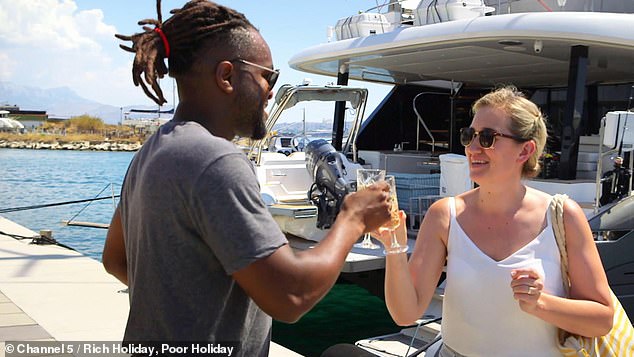 Parents-of-two Dessie and Hayley, from Bexley, are used to spending a maximum of £600 for their very rare holiday, but are treated to a week on a private yacht in Croatia on the show – with a champagne welcome

At the start of the show, Ton admits his nightmare holiday would be one with a communal shower.

‘It’s extremely important that there are facilities that I can use throughout the day because I like to shower two, three times a day,’ he explains.

And after touring the volunteering farm he and Andrew will be staying at for the week, the big spender, who has grown up surrounded by wealth thanks to his parents, is less than impressed.

‘Why would anyone want to come here?’ he asks an amused Andrew. 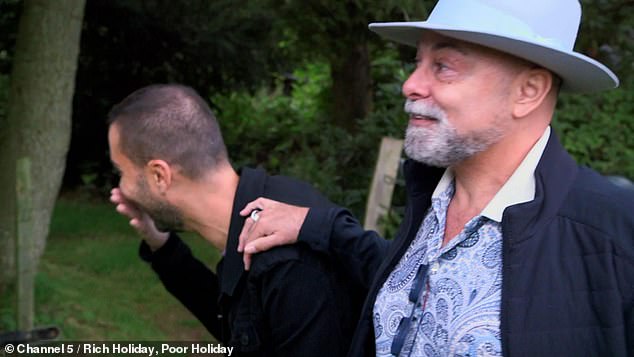 When he finds out that the caravan he will be staying in has no electricity or water, and that the closest loos are communal toilets which use compost rather than water, he shudders.

‘This is actually scary,’ he says.

Meanwhile, Andrew is excited about the idea of staying on the farm because he hopes it will remind him of holidays spent with his hardworking parents as a child.

The two friends are shocked to find they only have a budget of £100 for treats for the week.

And after their first night in, they admit they didn’t get much sleep due to the farm’s noisy cows. 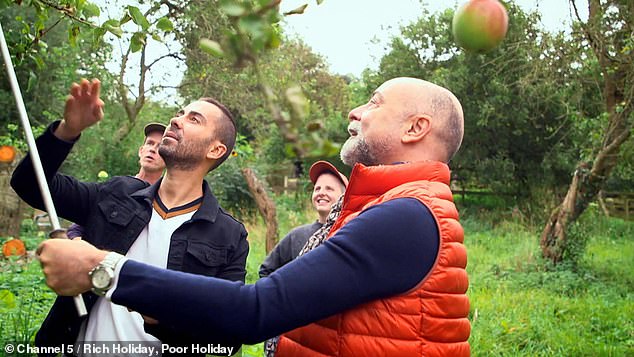 During their week in Shropshire, Andrew and Ton go apple picking with some of the local farmers 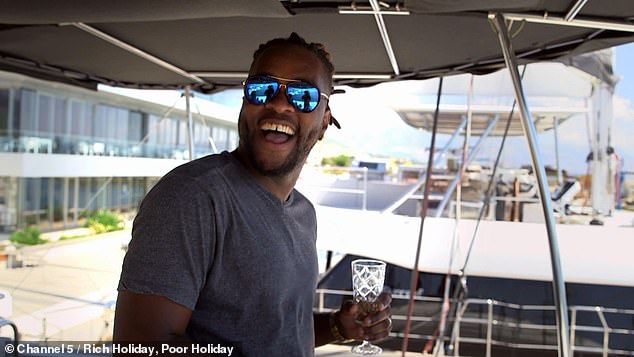 Dessie, a musician who was hit by the coronavirus crisis, can finally let his hair down during the lavish holiday 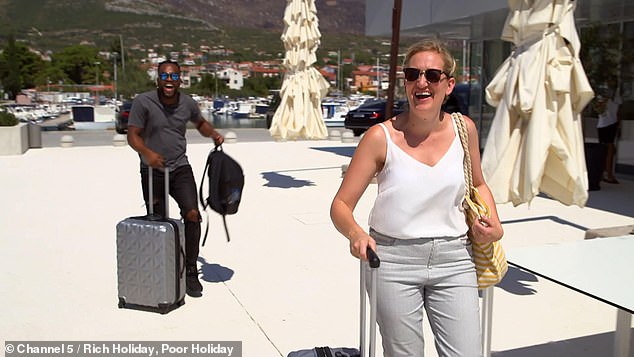 On his first full day working on the farm, there was no way for Ton to avoid the ‘scary’ compost loo.

‘It was a bit challenging to use it for the first time today,’ he says. ‘I survived, but I’m not looking forward to using it again. I’m not there yet but maybe after a few days.’

Andrew agrees that his best friend is totally out of his comfort zone on the farm.

‘I don’t think Ton’s ever done anything like this in his life,’ he says. 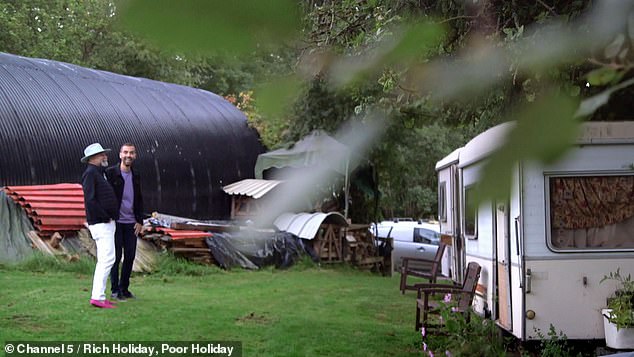 Ton and Andrew are not impressed with the caravans they’ll be staying in on the farm, which don’t have electricity or water 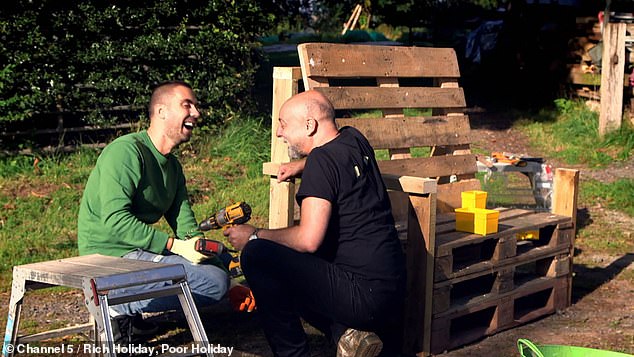 Best friends Ton and Andrew describe themselves as ‘lovers who don’t have sex’ and met while working at Harrods.

They love to travel around the world on lavish holidays, spending up to ‘£3,000 on accommodation’ and much more on entertainment and ‘great restaurants.’

But on their farm holiday, they have to work to earn their keep, starting by feeding the hens, cleaning the barn and scooping rabbit poo to make fertiliser.

And their programme for the rest of the week includes looking after animals on the farm, harvesting the crops, helping with a build and apple picking.

Meanwhile, skint couple Hayley and Dessie, two musicians who met while working on a cruise ship, want to experience what it’s like to have a relaxing holiday, instead of ‘working on one.’ 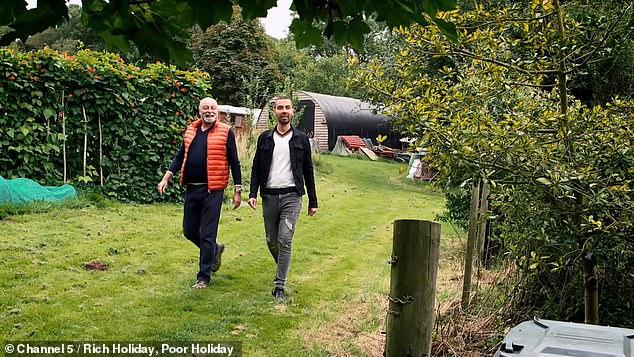 Andrew says the farm reminds him of his childhood holidays with his family, but Ton, who grew up in a wealthy family, is out of his element when they arrive on the farm

Their wish is answered when they are flown to Croatia on a private yacht with a chef and a skipper ‘at their beck and call.’

The couple, who are parents to two daughters, have never had a real honeymoon and are looking forward to reigniting the romance in their relationship with some time to themselves.

On the beautiful Adriatic coastline, the couple can finally relax, with the mother-of-two saying: ‘This is exactly everything that we pictured when we wanted to have some alone time to ourselves.’

‘It’s been quiet in our relationship since having children so I was yearning for Dessie to show me a bit more attention.’ 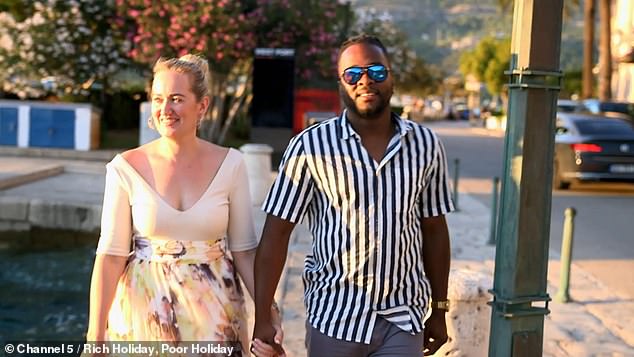 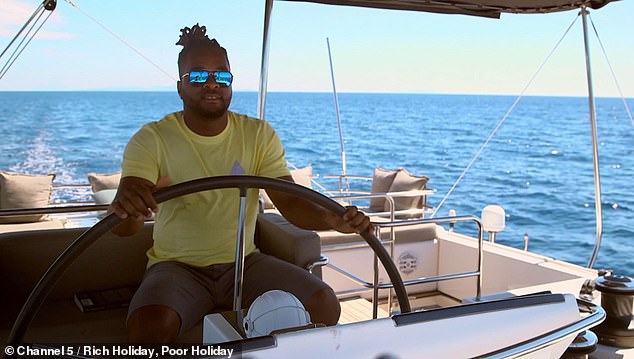 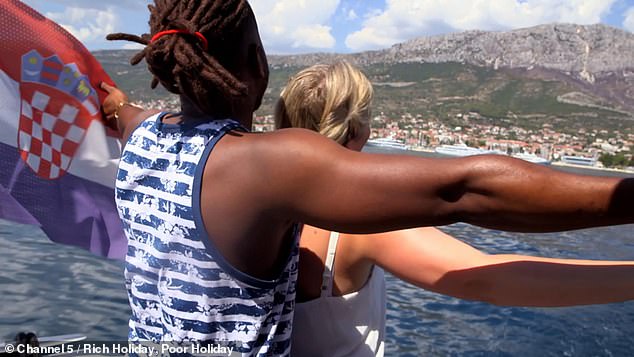 During a romantic dinner, she opens up to Dessie and admits: ‘I think that sometimes we forget how attracted we are to each other.’

Dessie is set to make his lady feel special and writes her a song to ‘up the romance game’ which he sings to her during a night out.

However, the lavish holiday make the couple reflect on what rich people are looking for in a vacation.

‘The more money you have, the more isolated you can become,’ Hayley says, to which Dessie asks: ‘Do you think that rich people…sometimes they are more jealous of how we live than how they live?’

Hayley assumes that wealthy people must have stressful lives, which drives them to want to isolate from others during their down time. But she adds this is not what Dessie and her are seeking. 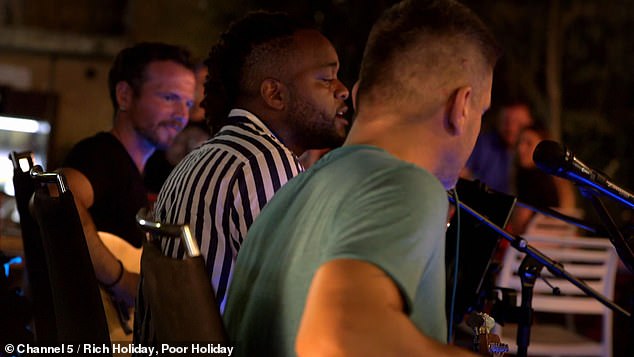 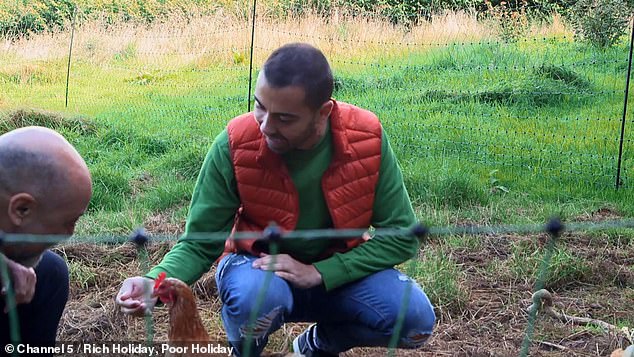 The couple agree they’d rather spend their time off ‘surrounded by family.’

When they find out that the lavish holiday they’ve been on is worth £30,870, the couple are speechless – and the mother-of-two is not that impressed.

‘What we could do with £30,000,’ she says. ‘But if you think about what we gained from doing that as a couple it’s invaluable.’

Meanwhile, Ton and Andrew are shocked to find that their holiday on the farm cost nothing. 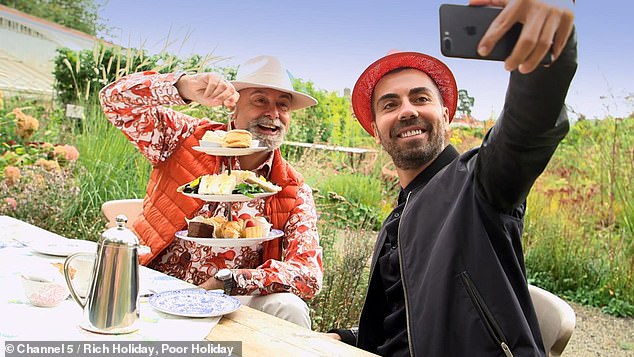 The two best friends treat themselves to an afternoon tea with farm treats during their stay. They had a budget of £100 for the whole week 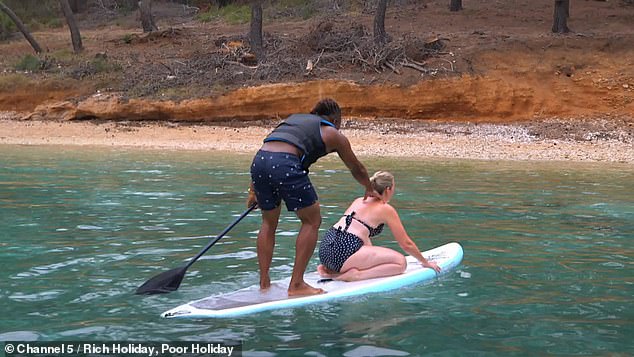 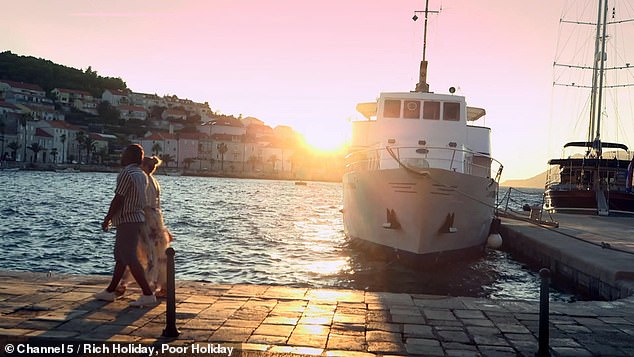 When it’s time to leave Croatia’s coastline to go home, Hayley remarks no amount of money could take away the love she feels for her husband

‘We’ve had an amazing week on a holiday that costs nothing and normally we spend thousands. I think it’s actually inspiring,’ Ton says.

Due to the coronavirus pandemic, the holidaymakers did not meet at the end of the show, but instead, Hayley and Dessie wrote to Ton and Andrew.

‘Thank you for everything you’ve done for us this week. Even though your holiday cost nothing, the help you have given us is priceless,’ it read.

‘There is nothing that money can buy that would take away my love for this man,’ Hayley says at the end of the show. ‘I know he would say the same about me, through and through.’