Every week, we send a couple out on a blind date. This time, Freddie Cocker, 25, had dinner in Ember Yard in London with Nia Davies, 28. 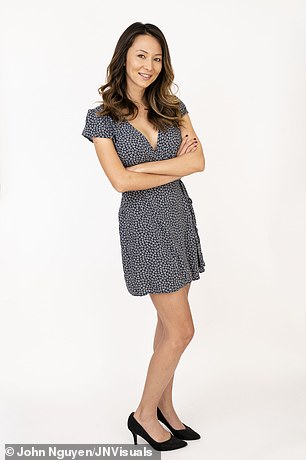 I was worried about not being able to find the restaurant, so I got there early and was sitting at the table when Freddie arrived.

I knew that he was younger than me, but I figured it didn’t matter. I thought he seemed nice and friendly. I could tell he was nervous, but I guess that’s normal — and, luckily, we immediately found common ground.

He started work in PR and is now also involved in a start-up business, which I am, too. I work in marketing and also run a cosmetics start-up. Freddie runs a mental health charity, which I admire, because it’s extremely important. You have to be vulnerable to talk about mental health and I liked that about him, as he was very open.

I admired his honesty and our shared experiences of setting up new ventures had us chatting for ages.

However, his main focus was music — he is one of those people to whom music is everything. I don’t think I lived up to his expectations in that department.

I felt that nothing I said about music was right, especially when I told him I liked Taylor Swift. But he is clearly passionate and knowledgeable.

We chatted a bit about our families, but never got on to past relationships. I’ve had four serious boyfriends, but have been single for a while. I do use online dating apps, but I’ve been so busy lately I haven’t focused much on it. I find them superficial and, after a while, they get boring, so I often stop using them for long periods.

Generally, I try not to have an ideal type in mind, because expectations can limit you — but I tend to like chivalrous, handsome men with a funny and spiritual side. I know that chemistry is a tricky thing. You can either have butterflies from the start, or the attraction can grow, so I am open-minded.

I love being active with yoga, Pilates, hiking and skiing when I can, so between that, work and my new business, it can be hard to find the time to date and I’ve learned to take people as they are.

The restaurant was nice and had a lovely vibe, but we hadn’t realised it was tapas and ordered just two dishes, then wondered why they were so small!

We more than made up for it with the desserts, though.

I wouldn’t say that there was any flirting or cheeky banter going on, but we had a chilled-out, easy time.

I had driven in, but Freddie was getting the train, so we didn’t linger too long and parted with a hug.

I don’t see any romantic potential, but I want to keep in touch with him. We swapped numbers and we might even get together to collaborate on some work things. I guess for romance, it’s back to dating apps for me.

LIKED? He was open and friendly.

Freddie Cocker (pictured), 25, is in PR and lives in South Woodford, North London

I was quite nervous when I arrived, but, as soon as I saw Nia, I relaxed. She was friendly and warm and we immediately started chatting.

We work in similar areas, so we connected about the challenges our jobs can have, and also talked a bit about our childhoods.

Music is a huge part of my life and, while I don’t expect someone I date to love it as much as me, I’d like to meet a woman who would be willing to try new things with me, and vice versa. I do realise I’m obsessed with music and am often going to gigs and festivals.

Although dance music is my favourite, I like all types. While Nia is not as into music as me, we did have a good chat about Taylor Swift’s upcoming album.

I also told her about the work I do with Vent, a mental health charity. We try to help everyone, but especially men and boys, open up about their mental health. It takes up most of my spare time.

Nia surprised me with how open and compassionate she was about the subject, and she even asked me about my own experiences.

Some people prefer to avoid the subject, and I’ve been on dates where the topic of mental health doesn’t go down well, so I appreciated that she was interested. It was refreshing.

It’s a shame that, on a romantic level, sparks didn’t fly — and I’m sure she’d agree on that, too. I don’t think there was any flirting on either side. But the fact that neither of us felt any chemistry meant we could relax.

We did swap numbers half way through the meal, as we may well do a work project together, so there is potential — though not in a romantic way.

Unfortunately, I’ve not had much luck when it comes to relationships, but it’s not for lack of trying. I’ve never had a serious long-term relationship, just short-term liaisons.

Dating apps are something I’m terrible at. I find the whole ‘swiping’ culture a bit hollow — it’s hard for me to judge someone for five seconds and then ‘swipe’ them one way or the other.

I’ve been duped a couple of times, too, with the real person not matching their picture profile. The whole process is a bit demoralising.

This blind date was a massive step out of my comfort zone.

Being an extrovert, I prefer to meet people in the flesh, but it’s getting harder, as my social group are all in long-term relationships, as are my three siblings.

It’s not always a bad thing being single, because I get to do my own thing, but it’s harder convincing other people to do stuff with me when they are comfortable with their partners on a Saturday night.

I love dancing, so I’d like to find someone to go to gigs with and, equally, someone with whom I could have a nice night in watching a film.

After the meal, I walked Nia back to her car and we parted with a friendly hug.

LIKED? She was open, friendly and clearly someone with compassion and empathy.

REGRETS? None at all.