An American woman says that she wants to bring her famous boyfriend to her sister’s upcoming wedding — but the sister is furious that the boyfriend might take attention away from her on her big day.

The woman shared her story on Reddit, complaining that she got into an argument with her family over the proposed plus-one.

Her sister, she said, ‘is upset that I would even think of bringing my boyfriend, because it’s going to steal her thunder’ — and their mother is taking the bride’s side, telling the Redditor she is being ‘unfair.’ 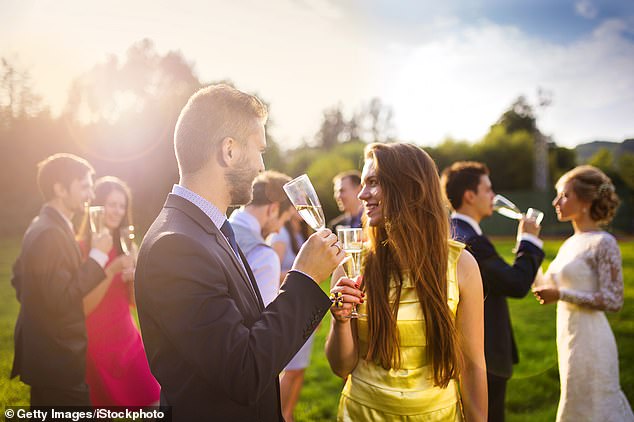 Drama: A woman says that she wants to bring her famous boyfriend to her sister’s wedding, but the sister is worried about being upstaged (stock photo)

The woman said that her boyfriend is ‘famous.’ Though he’s not on the level of Brad Pitt, he is ‘someone that my particular small town family would recognize,’ on par with a country singer.

They live in a big city and have been dating for about eight months, but things have grown serious as they are quarantining together.

‘So my sister is sending out RSVPs for her wedding (which is like, months away, and we don’t even know if it’s going to get postponed because of corona).’ she wrote.

In their big city, ‘no one cares or bothers him much’ — but, she admitted, ‘I understand that in a small town, any excitement is…. exciting?’

She explained: ‘Basically my sister is upset that I would even think of bringing my boyfriend, because it’s going to steal her thunder.

‘Part of me gets it, but part of me is just annoyed. She and my parents have already met him, he’s been to our home town before. And sure, like, our cousins and extended family haven’t met him. And yes, it would be the first large family gathering that he’s a part of.

‘The conversation then turned into an argument about how famous he is or isn’t (they’re acting like I’m bringing Justin Bieber home), and even if I was… I guess famous people aren’t allowed to date…..?’

Even her mother is taking the sister’s side, calling the woman ‘unfair.’

Other Redditors have quickly chimed in, with most seemingly in agreement that no one was strictly in the wrong here.

‘You have every right to want your bf with you at the wedding, no matter how “famous” or not,’ wrote one. ‘At the same time, a wedding day is all about the couple (especially the bride), and if there is even a remote chance that his attendance will cause excitement then it’s natural for her to want to avoid being upstaged by a guest.’

‘It’s her wedding, she gets to set the invite list. I think it’s messed up she wouldn’t let him come, but it’s her choice,’ wrote another, telling the Redditor she has every right to be angry, too.

Several offered a helpful workaround, suggesting that the woman and her boyfriend visit for a big family gathering ahead of the wedding, where everyone can meet him on a day that’s not about the bride and groom.

She agreed that it would be a good way to ‘get people’s excitement out of the way’ and planned to discuss it with her sister.’

And, she added, she still intends to go to the wedding, whether her boyfriend can come or not.

‘But, reading through these comments, I feel validated that I’m allowed to go and still feel upset about it,’ she said.

She also added that several people who tried to guess the famous boyfriend’s identity were unsuccessful.