A mother-of-five cruelly bullied for being the ‘darkest kid in class’ has finally found confidence after becoming the face of a new shade of foundation that perfectly matches her skin tone.

Joy Mohammed, 31, from Detroit, spent her life wearing make-up that was too light for her skin – leaving her feeling ‘ghastly’ during dance recitals or class photos.

Despite growing up in a black community, she was constantly asked if she’d been in the sun too long or if she was adopted because of her dark skin tone.

But last week the law student found herself crying tears of pride as she got ready to step in front of the cameras and model new make-up shade 1.04 Warm Red Ebony.

The foundation is sold by Detroit-based brand The Lip Bar, owned by black female entrepreneurs, which Joy has supported for years. 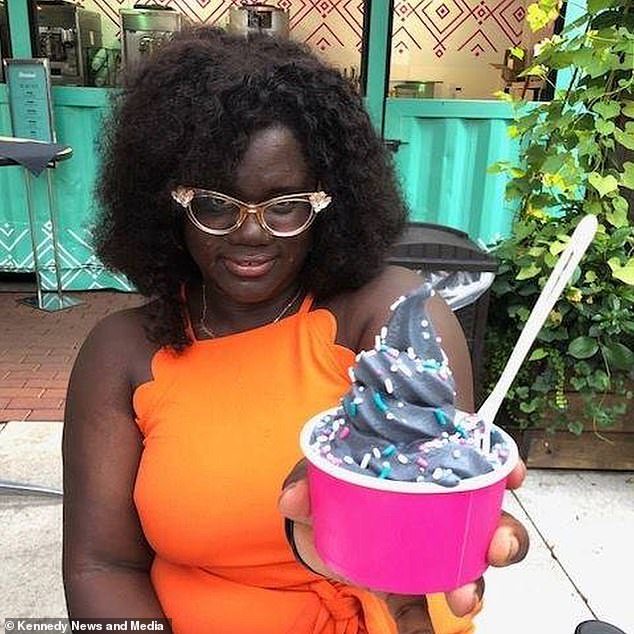 Joy Mohammed (pictured), 31, from Detroit, was asked to model a foundation that matches her skin tone perfectly, after years of being bullied for her dark complexion 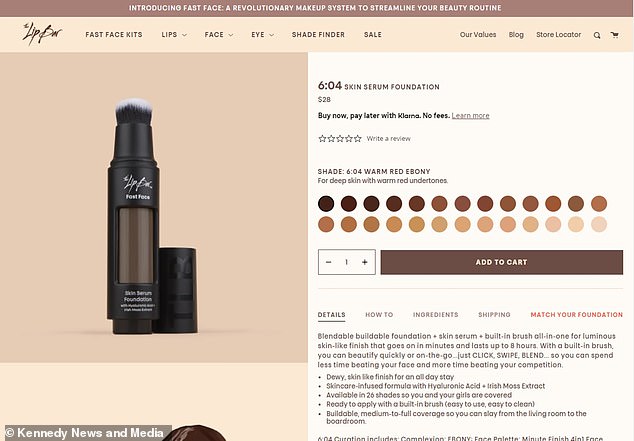 The foundation (pictured) is sold for $28 by Detroit-based Lip Bar, a brand Joy has supported for years 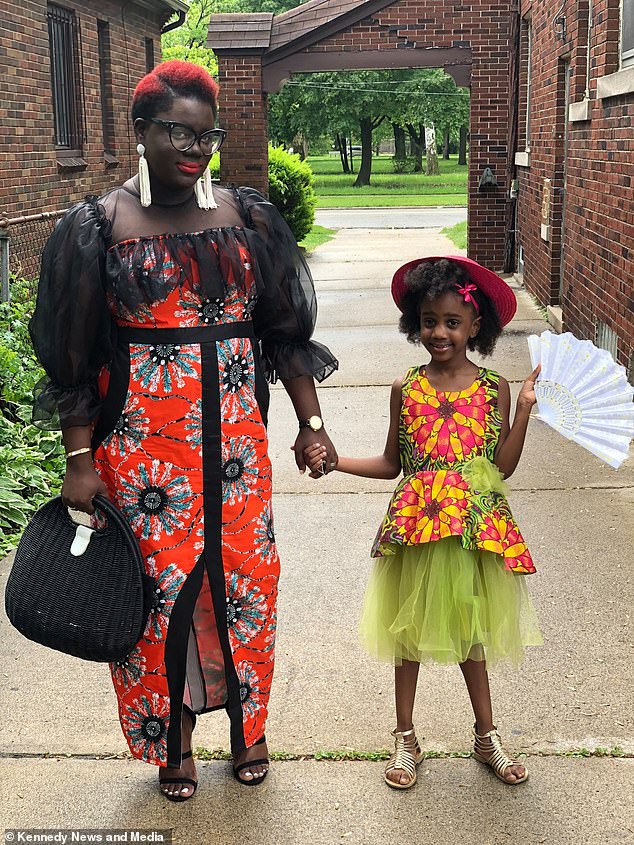 Joy said: ‘I was completely overwhelmed to be asked – absolutely blown away.

‘I couldn’t get over the fact I was tapped to represent a foundation shade that was unavailable when I was in need of make-up for senior photos and dance recitals, because my skin tone was so “undesirable” to the masses.

‘I was always the darkest kid in class when I was younger – it was rough. People would make comments about my skin colour and call me things like “blackety black”.

‘I remember putting on make-up and trying to make it work [even though it was too light]. 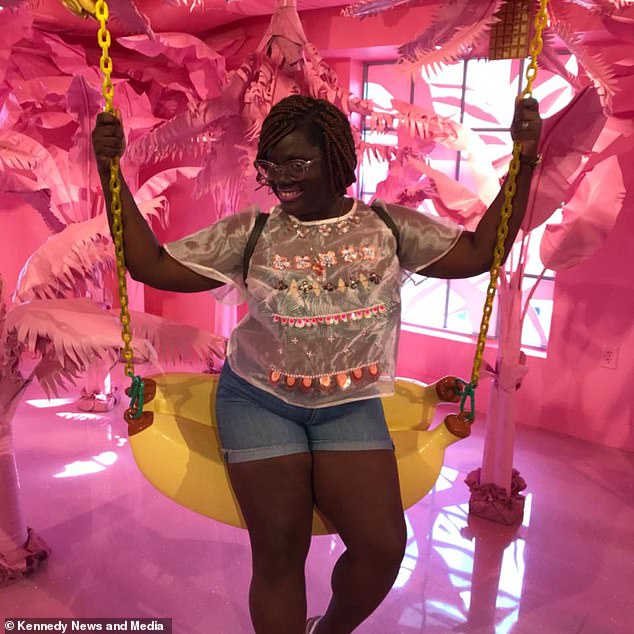 Before, the mother-of-five had to battle it out in order to find the right foundation, and enjoyed more misses than hits, looking too ‘ghastly’ with mismatched and too light foundation

‘I looked horrible, just ghastly. I’d have a dance recital and all the girls would get their make-up done, but I remember going to the local convenience store because that’s all I could afford.

‘I would go there to get the darkest foundation they had – it was ‘Queen Latifah’ shade.

‘People would ask me if I was out in the sun too long, or ask what was wrong with me.

‘They would ask me ‘oh is that your mum, because she isn’t as dark?’ This all came from black people in my community.

‘To have the same thing that people were so mean to me about for years, and then be told “it’s okay.” I was able to really let it go for the first time.’ 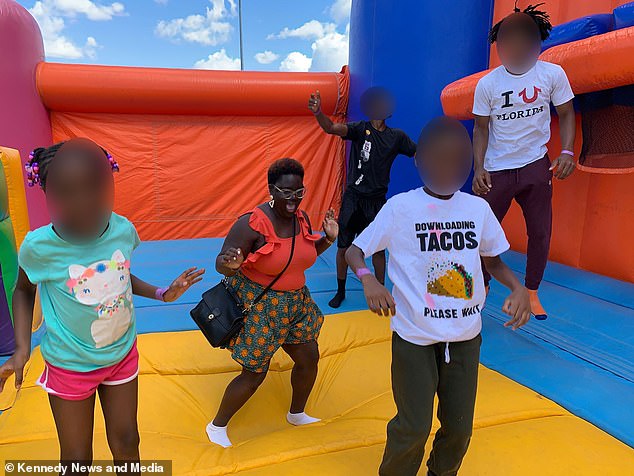 Joy having fun with her family in a bouncy castle. As a child herself, the mother-of-five was once called ‘blackety black’ 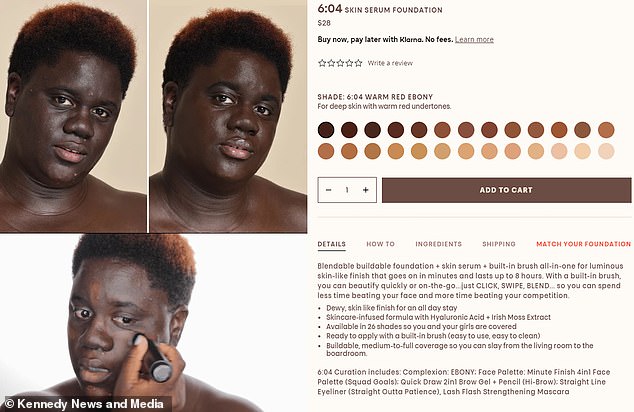 Joy was badly affected by the callous slurs she faced as a youngster and carried the effects into adulthood, until she found The Lip Bar that was created with black women in mind.

When she was invited into the make-up studio by The Lip Bar product developer Kori Fields, who has since become a friend, she couldn’t believe her luck.

Joy said: ‘I was drawn to this brand not only because it was also Detroit-owned, black-owned, and women-owned, but because it worked so well and showed up on my skin so well.

‘The kind of low-priced makeup you get in supermarkets doesn’t show up on me.

‘Kori got in touch one day and said “hey, we need to come in because we need to match your skin for our new foundation”. 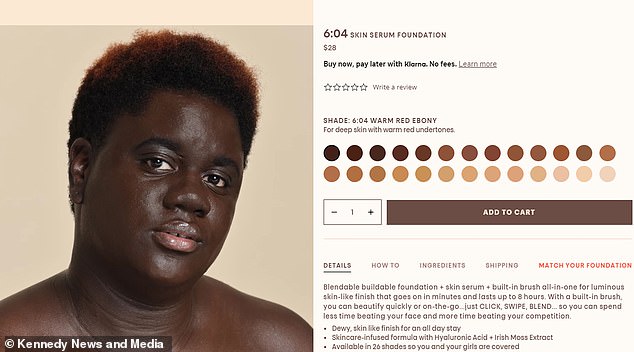 Shutting down the bullies: Joy said she was deeply affected by the abuse that plagued her for years 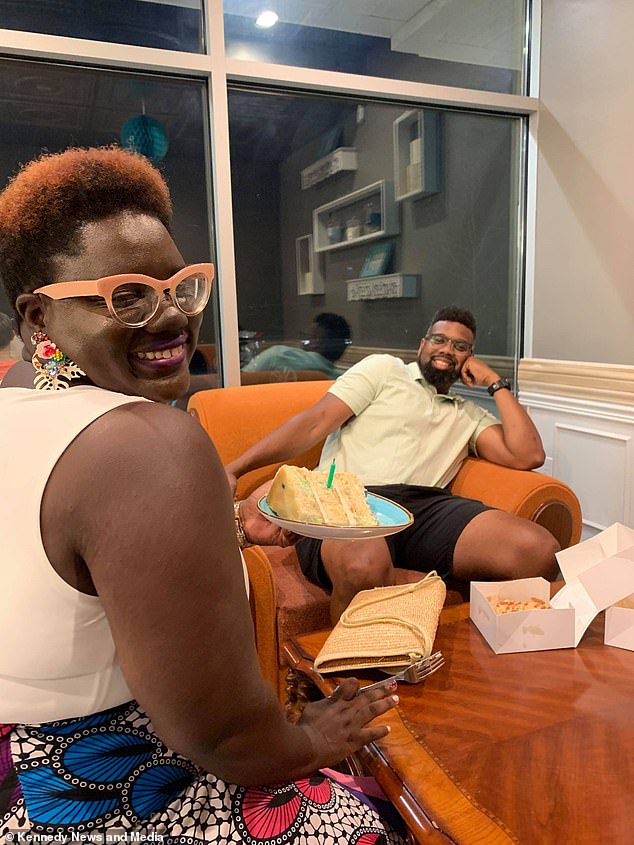 Joy, who is happily married to Issah (right), said the foundation was better than established brands like Too Faced and break-out successes like Fenty Beauty

‘FENTY has a foundation in my colour, I think Too Faced has one that’s pretty close, but this one was so close to my heart because I’d been supporting their product for so long.

‘The product colour is seamless, it goes on and you can’t tell when the product ends and where my skin begins.’

Joy even took her little girl Adaline, five, along to teach her about “beauty diversity” and share the proud moment.

Joy said: ‘I took Adaline because I wanted her to see that what we consider beauty diversity to be normal for her, and that beauty comes in all shapes and sizes.

‘I didn’t want to tell her about it or show her pictures, I wanted her to see it.’

Kori Fields, product developer at The Lip Bar, said: ‘We want everyone to feel like they have a home with us.

‘Joy is one of our number one fans, we always reach out to her when we can because she’s always excited and helpful.

‘She owns pretty much all of the products we already have.

‘We have to support those who support us, she’s always been great.’ 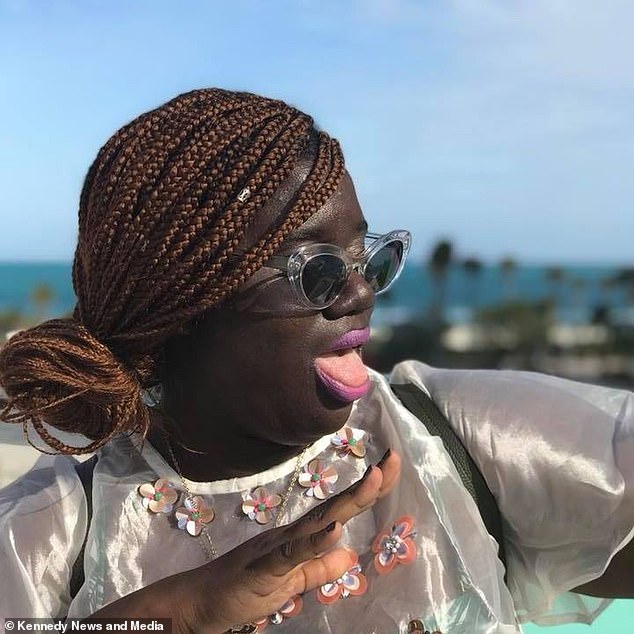 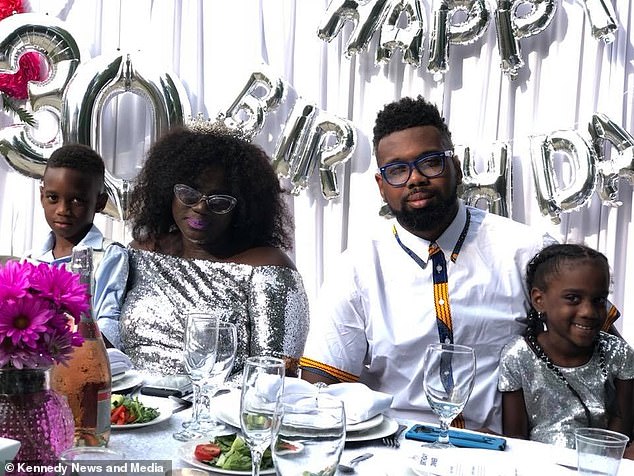 Joy with two of her children and her husband Issah on her 30h birthday last year. The woman used to buy her foundation in convenience stores because it was all she could afford 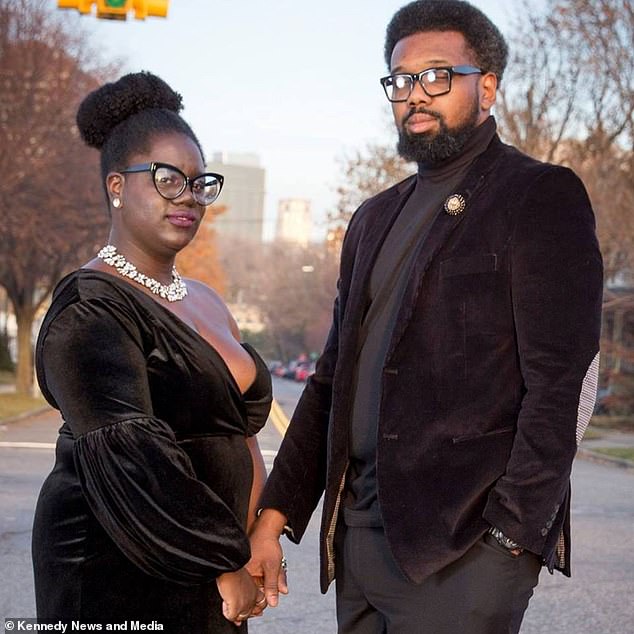 With her matching foundation, Joy enjoyed a newfound confidence and finally put her critics to rest. On a night out with Issah